To John Yoo, Thanks for Everything! Barack Obama 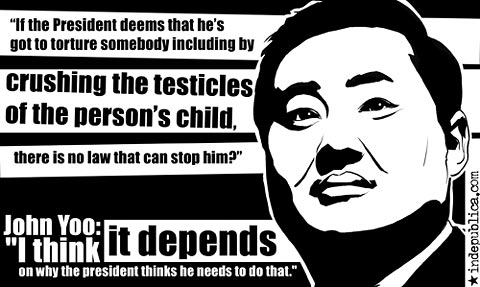 Dude would be smart to keep his head down, but noooooo…

Barack Obama may not realize it, but I may have just helped save his presidency. How? By winning a drawn-out fight to protect his powers as commander in chief to wage war and keep Americans safe.

Part of Mr. Obama’s plan included hounding those who developed, approved or carried out Bush policies, despite the enormous pressures of time and circumstance in the months immediately after the September 11 attacks.

We could only hope. But last we checked, Dick Cheney and Donald Rumsfeld still walk the earth.

My Gift to the Obama Presidency [John Yoo/WSJ]

Where’s Vlad the Impaler when you need him?

Little known fact that Japan used Koreans to guard POW camps because they were extremely vicious.

Apparently, US America uses Korean lawyers to do the same.

*Shakes head in dismay at this “cousin”*

God will fuck him up.

Yoo needs to have his head stuffed into a door jam of a 72 Buick Electra 225 and enjoy the pleasure of feeling the door slammed on it 200-600 times. It’s not torture when it’s just or when it’s fatal in under 10 seconds.

I wasn’t even gonna mention this ’cause it’s just too sad.

We won a zillion gold medals at the Winter Olympics and received a DOJ endorsement of our torture regime all in one week! (And yes, I know it’s not officially an endorsement, but you know they can’t hold anyone accountable for anything ’cause they’re still torturing everyone they can get their hands on. They can’t kipnap the brown people with funny names off the streets fast enough). Anyway, just when you think this country can’t sink any lower…

Also, I can’t believe not one person has the B-A-L-L-S to give Yoo a taste of his own medicine. These techniques are gonna be used on all of us, eventually.

I wonder what Yoo would think if Obama snatched him and the rest of the Bushies for some “enhanced interrogation” about exactly how fake-ass the justifications for the Iraq War were.

FYI: Not that this matters but this old queer thinks the Swedish curling dudes are hot. Jus’ saying. Now back to Yoo who.

@iPrick: Keef is being bumped by sport? Oh, the irony.

Sweden beats Great Britain on the last toss! Or throw! Or slide! Whatever.

@nojo: I am also clueless on this event and happy to remain so. The PE person at my facility luvs teh curling, had it on a TV playing all the time. She told me she read up on curling and figured it out, and she is hardly the sharpest knife in the drawer…however that may be indicative.