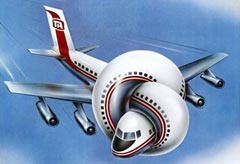 While we have the Wayback Machine warmed up, our inaugural post on September 25, 2008, was “Looks Like We Picked the Wrong Week to Quit Campaigning”. And lo, the inspiration for that post is back in the news:

McCain said Bush called him in off the campaign trail, saying a worldwide economic catastrophe was imminent and that he needed his help. “I don’t know of any American, when the president of the United States calls you and tells you something like that, who wouldn’t respond,” McCain said. “And I came back and tried to sit down and work with Republicans and say, ‘What can we do?’ “

Of course, Hank Paulson doesn’t remember it that way:

In his new book “On the Brink: Inside the Race to Stop the Collapse of the Global Financial System,” Paulson belittles McCain’s contribution to the response, noting that “when it came right down to it, (McCain) had little to say in the forum he himself had called.” He also called McCain’s decision to return to Washington, apparently without a plan, “impulsive and risky” and even “dangerous.”

But we have to admit to a Senior Moment ourselves: Why did it take us this long to recognize that both halves of the 2008 GOP ticket have a habit of quitting on the job?

Sen. John McCain: I was misled on bailout [Arizona Republic, via ThinkProgress]

I regret even liking this guy.

It seems that Karl Rove did one good thing and that was keeping McCainiac out of the WH.

@Dave H: Keef’s been dining out on that story from the start, since he was Letterman’s last-minute replacement guest. If he runs with the latest tonight, we’ll probably see Dave’s Greatest Hits again.