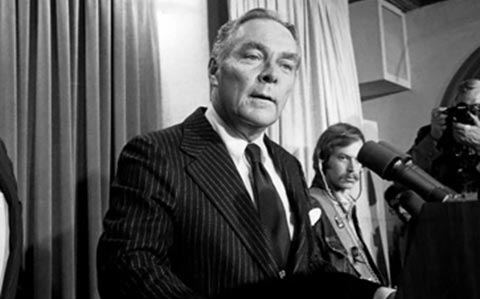 The running joke on Al as Sec State was “Dept of Haig: I am the State”

Took after his old boss MacArthur from what I understand minus the lipstick and corn cob pipe.

I got nothing. And by ‘nothing’ I mean a full bladder. And by ‘full bladder’ I mean I know who I’d like to piss on. And by ‘piss on’ I mean…

And not in the fun ‘Mike Lee’ way either.

@Benedick: Is it Ballantine Ale time?

Standing outside Hunter’s house in the Austin suburb of Cedar Park, Ken Hunter said he wanted to tell people about his father after hearing about Stack’s life and his anti-tax crusade. He was alarmed by comments from Stack’s friends who said he was a good person and Internet postings calling the pilot a hero.

“People say (Stack) is a patriot. What’s he a patriot for? He hasn’t served the country. My dad did two tours of Vietnam and this guy is going to be a patriot and no one is going to say that about my dad? That’s what got me started talking. I couldn’t stand it anymore,” Ken Hunter said.

ADD: And the family’s statement is classy to Joe the Pilot’s widow and kid.

For Amusement Only, since Mittens usually wins. But Ron Paul? Really? Just when the GOP thinks they’ve got this under control, all hell breaks loose again.

93% of those polled don’t want Palin as their first choice? That’s fucking retarded.

Vernon Hunter grew up in Orangeburg, S.C. before joining the Army after high school in 1959 and served about 20 years. Though he liked his job at the IRS, he had just begun to hint at retirement and was talking about going back to school to get a degree teaching children with learning disabilities.

Oh yeah, the jackass who decided to crash a plane into a building because he couldn’t do his taxes properly is definitely more of a hero than the war vet that wanted to help teach disabled kids. Not to mention this guy WILLINGLY worked for the IRS. Do you know how boring that job had to be? I dare one of you to tell me the teabaggers that were hailing Crashy McSuicide as a hero aren’t about anything but ignorance and hate.

@JNOVjr: In my limited dealings with the IRS I always found them helpful. Strict, yes. But if they make a mistake they put it right. Maybe I’ve had atypical dealings. But like Prom, I’m proud to pay taxes. It means I’ve had a good year.

@JNOVjr: One article I read about him said that he was inspired to do that because one of his granddaughters has a learning disability and he worked patiently and closely with her to help her learn to read.

@All: Thank you for indulging me on my fixation on the bullshit that Joe the Pilot has inflicted, but it hits really close to home for me. The guy who got burned works with a dear friend of mine, another friend of mine works down the highway from this building, my favorite Vietnamese restaurant in the world is around the corner from the building.

AND: Remember the video I linked to a few days ago of the 67 year old homeless ‘Nam vet “Vietnam Tom from Chicago” wearing the “I am a Motherfucker” t-shirt unleashing old school whoop-ass on the AC Transit bus on a young kid with whom he was arguing? Holding aside who did what on the bus, apparently he’s now an Internet meme and currently the most famous San Franciscan, though the interview on that website shows the extent of his mental illness (and reminds me of some relatives when they’d go off their meds). You can now buy a replica of the t-shirt he was wearing that day that said “I am a MOTHERFUCKER” (note to random punks on public transit – don’t fuck with a mentally ill guy wearing a shirt that says that).

Most bizarrely enough, the woman who sits on the bus placidly through the whole fight and looks like the ultimate hipster/American Apparel model is now the object of many a web obsession.

Only in Ess Eff do we have this many bored and out-of-work graphic and web designers to do all this shit.

@SanFranLefty: This just makes me realize the moral shittitude of those who would applaud that shitbag Joe the pilot.

Why are all the people who think they are “patriots” also the ones who hate to pay taxes? Oh, they say “patriotism” is loving your country, not your government, Bullshit. Our government is us, its not some other, this is the moral emptiness of the republican belief that government is evil per se, the Norquists who want to drown the government in a bathtub, thats not patriotism, thats sedition, and its become a base value of the GOP, and it encourages this shit. Its fucking evil, its barbarism.

@SanFranLefty: When I read, “Fight on AC Transit Bus,” I thought someone was having a fight on a jitney or something. That video’s pretty fucked up, but I have to admit that I want one of those shirts.

@Promnight: Every time I hear the word “patriot,” I cringe a little. Not because I have a problem with patriotism, but because the word has been so twisted and perverted from its original meaning. Someone honestly tried to argue to me once that republicans were naturally more patriotic than democrats because (according to this person), the dems do nothing but burn flags when they protest. Even if that were the truth, I’d say that questioning your government’s actions instead of blindly following it is the sign of a true patriot. You can care about something and still recognize that there’s a problem with it, you know? And exorcising his right to freedom of expression is one of the most patriotic things a person can do, in my mind.

@JNOVjr: One of my magazines has a preview of the upcoming NRA convention. It’s all about patriotic patriots doing all kinds of patriotic shit like listening to Oliver North and crappy patriotic country music at the David Duke Ballroom in the MetroHick Marriott in Pig Gristle, Arkansas. Not even Stephen Colbert could go toe to toe with them for excessive flaginess and laying it on so thick.

Guess which one we’ll still be hearing about a month from now.

@redmanlaw: Before the show started, I remember thinking, sure, he can be funny for a segment, but can they make it work for an entire half-hour?

@Nabisco: Are you kidding? Nobody can be that crazy.

@redmanlaw: Wayyyy OT, an obit for “Tribal Judge David Harding” has passed through my hackwork. Briefly attended UNM law school. Anyone you know?

@nojo: Mrs RML and I had the same thought. BTW, I looked at Judge Harding’s obit. Apparently he went to Duck Law but attended the New Mexico law school’s summer program for incoming Indian first year law students anywhere, which is intended to give attendees a look at the process of legal analysis, how to write an exam etc. I skipped it and went on a solo camping trip for about a week. I also ended up on academic probation in my first semester because (a) as a naturally intuitive thinker, the analytical method was entirely foreign to me and (b) I didn’t know how to write a law school exam answer. Oh, well.

A Navajo friend of mine saved my ass when she said “you have to take little baby steps” in legal analysis. I ended up winning the prize at graduation for best academic improvement.

No road trip to the ancestral homeland today. Winter storm warning in effect, so I’m headed back to bed. I have a huge pile of firearms, flyrods and gear for stalking the mighty pike, and groovy Pendleton blankets we were going to wear to the Pueblo to put away later.

@redmanlaw: Those pike must be mighty indeed if you need firearms to subdue them.

I’m flying back to LA today through Reno and Vegas. On the hunt for tacky refrigerator magnets for a friend. I think she has the fabled jackalope so I’ll need to dig a little deeper.

@Dodgerblue: You have to fly through Reno and Vegas? That’s inhumanly cruel. Although you will, of course, be in the motherlode of tacky.

@redmanlaw: I think I made it until junior year before learning how to write.

@redmanlaw: Ever been ocean fishing? I really want to try it … or fly fishing. I’d eat what I killed.

@Dodgerblue: Ahh, Southwest Airlines. Were you in Tahoe? Hope you can get out with the snow (I assume it’s snowing in Tahoe/Reno because it’s been pouring rain here all day).