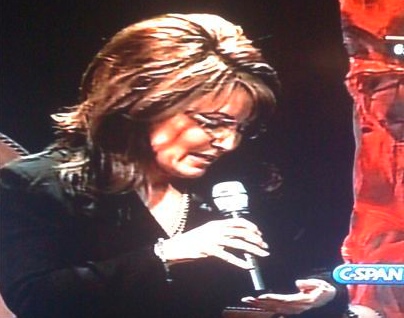 [Sunday update: We were wrong, they were right.]

OMG!!!!1! Did we miss the most awesome historic moment of Talibunny’s Teabagger speech?

“She then seemed to forget her next talking point and glanced down at her left hand, as if there were notes she had scribbled down,” raves ThinkProgress!

Well, let’s have a look…

Yes, yes, Sarah Palin is looking down at her hand!

Hold on — what’s she doing six seconds in? Let’s freeze and zoom:

People, people, people: Sarah Palin’s mind is full of bumper stickers. Her speech was a series of run-ons punctuated by applause lines. Why would she need to crib?

This is a screenshot from a short video purporting to show what we’ll bet is some embarrassing evil symbol. But if you look at the full frame from that moment… 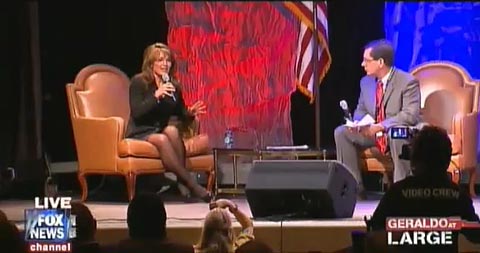 …that’s some detail to pick out in that distance. Because when we select a more typical close-up shot… 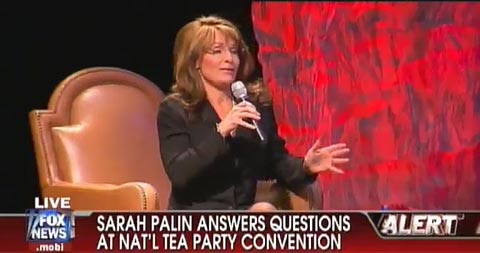 …maybe that’s a smudge, although it’s more likely a shadow.

Palin waves her hand a lot during the Q&A, and we just can’t see any scribbles there. But we’re looking at a half-HD feed, and maybe more detail is revealed in full resolution.

On the other hand, what the heck: When the meme becomes fact, print the meme. If Sarah Palin is going to be hounded by a vicious misrepresentation of her actions, who are we to complain?

nojo
12:13 am • Sunday • February 7, 2010
comment »
Choose Your Delusion
Live from the Teabagger Convention! Not Performing at Halftime
9 Comments
ManchuCandidate

Naw, she just saw Russia from her palm.

Talibunny calls for revolution against the nig-THONK president
How is this not treason? Given anyone who questioned war on Iraq was a traitor in 2003…

@SanFranLefty: Overblown. Her speech was fifty-ish minutes of rehashed bumper stickers from the past two years. Even with a teabagger audience, her tone was less effective than the GOP convention speech, or “palling around with terrorists.” If there was anything truly offensive about it, I would have noticed.

But maybe it comes off better in writing. Which would be highly ironic.

Definite non-starter as far as conspiracies go; she made a couple of coded swipes of those athletic legs of hers (“look at me preen you Todd wannabes – just dare me to flash you a glimpse of my frozen tundra” it suggests) that would have taken all but permanent marker off her palm.

But on a related note, I caught Tank-retread’s remarks at the teabagger convention and noted he was reviving the “socialist agenda” and the tired emphasis on Barry’s full and proper name. Do they really expect to play 2010 ball under a 2008 salary cap?

@Nabisco: If that close-up video is a prank, I’m all for it — whoever posted it on YouTube created a new account just for the purpose. I applaud their industriousness.

On the other hand, running with such an easily discredited subject reeks of desperation. And even if HuffPo’s image is correct, it’s a symbol, not a scribble. This proves what?

@Nabisco: Ah, Tank. I guess I’m supposed to get excited about him appearing at an event that’s been disowned by half the teabaggers out there. Look! They’re all racists! Just like we thought!

But I guess this much can be confirmed about teabaggers: Despite their protestations, they have nothing to do with taxation. It’s really just wingnuts flying a new freak flag.

There is no writing in Talibunny’s paw. It is a symbol – the Sigil of Lucifer.

When she has any doubts about the power of pure evil. she gazes at it for inspiration and remembers the power and glory of her master in hell.

If Caribou Barbie’s the best that evil can do, then Ol’ Scratch is losing his touch… :)