Stinque
Home Latest Comments Log in
If it smells, we’re on it.
Stinque
Assholes, they do vex us.
Teachable Moments 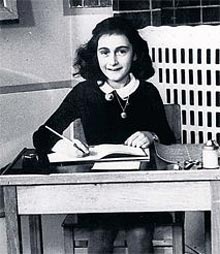 We think this clears things up, but somehow we remain confused:

The Culpeper County school superintendent said Monday that the school system had never formally removed a version of Anne Frank’s diary from classrooms following a parental complaint that some passages were objectionable.

Of course, that was how the local rag originally reported it: “school officials immediately chose to pull this version and use an alternative copy.” No formality required!

But we’ll be generous, and let that pass. Because honestly, we’re not sure anything has changed:

Superintendent Bobbi Johnson said Monday that the book will remain a part of English classes, although it may be taught at a different grade level.

Okay: Which grade? The original complaint came from the mother of an eighth-grader, which suggests a class of 13- and 14-year-olds. Anne Frank’s diary begins when she’s 13, and lasts for two years. Are children of Anne Frank’s age not sufficiently mature to read Anne Frank’s diary?

There is one mitigating factor: The Concerned Mother did not ask for the book to be removed from her daughter’s class — that now looks like an over-reaction by school officials. Instead, Mom “was asking that her daughter not be required to read the book aloud, as the class had been doing.”

Y’know, we really can’t disagree with that. We’ve been an eighth-grader. We know exactly what we’d do if we heard a classmate reading aloud the juicy parts. And we strongly doubt it would be edifying.

Her description of the vajayjay is exactly the same experience I had at that age, it was hidden, difficult to find, and mysterious. I had no idea what one looked like, all I knew I knew from “brail.” Back in the day, of course, you would never “see” a vajayjay, unless you brought a machete and a miner’s lamp to the festivities, things tended to be a bit overgrown.

I suspect it all comes down to district Director of Instruction Jim Allen (1) misinterpreting what had actually happened, and (2) not understanding that censorship, even (I would almost say especially) in schools, is kind of a big deal. So he nonchalantly told the paper yeah, sure, we pulled that edition without review because OMG Anne Frank was a normal adolescent!

@Promnight:
saw this thing on BBC thee other day. like the writer of this piece I was snagged by the title and once I started I couldnt stop:

@TJ/ Jamie Sommers /TJ:
this puts things in a rather different light from what I have read about this before:

But several of the 33 children had at least one living parent, and some of those parents said that the Baptists had promised simply to educate the youngsters in the Dominican Republic and said the children would be able to return to Haiti to visit their families.

howz this for random?
I always hear the name of this town when I am listening to the weather reports in the morning. that is the extent of my knowledge of it.
until I ran across this:

The Watseka Wonder: The Double Life of Lurancy Venum

The case of the Watseka Wonder, as Lurancy Vennum affair became known, came to attention of Dr. Richard Hodgson, a notoriously skeptical researcher into psychic phenomena
. He studied it carefully in 1980 and concluded that there was no way that the strange case could be explained by any normal means. Either Mary Roff had returned from the dead to possess the body of Lurancy Vennum, or Lurancy had developed a secondary personality that used psychic powers
to gather details about Mary Roff’s past life. The truth may never be known. The case of the Watseka Wonder retains its mystery to the present day.

FALSE!!! the School Board is trying to cover this thing up! my little sister was IN THAT CLASS and they pulled the book altogether! no substitute, just banned it completely. and once the story broke and they were shown to be the idiots they are, they threatened the teachers into staying quiet about it.