Stinque
Home Latest Comments Log in
If it smells, we’re on it.
Stinque
Assholes, they do vex us.
Life During Wartime 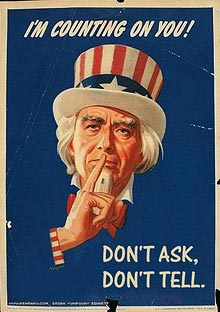 Fearing he might be smeared by liberals as possessing common decency, Orrin Hatch is walking back comments that suggested he supports the right of citizens to defend their country:

“It’s deeply regrettable that liberal groups are misconstruing my position on ‘don’t ask, don’t tell’ for activist purposes. I certainly do not support repealing this policy,” Hatch’s statement on Thursday said.

But a day earlier, MSNBC anchor Andrea Mitchell asked Hatch in a live interview about repealing the policy…

“I believe there are very outstanding, patriotic gay people who serve in the military and they ought to be given credit for it. And they shouldn’t have to lie about being gay,” Hatch said.

Added Hatch, “I just plain do not believe in prejudice of any kind.” Unless the wrong people applaud him for it, of course.

Silly Orrin: you’ve built your entry party strategy on the hatred and bigotry of a small core of religious zealots. What makes you think you can get away with saying something reasonable every now and then?

Definitely read that headline as “. . . Hates Flags” upon first viewing it. I suppose that would better describe his earlier, America-hating position.

You have to be a bigot to play ball in the GOP. Sad.