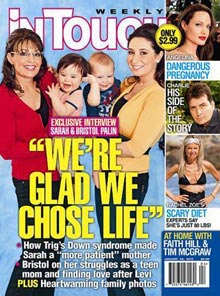 In Touch Weekly’s gamble on Sarah Palin didn’t pay off. The magazine paid $100,000 for a cover story on the former Alaska governor and her daughter, Bristol, for the current issue. But, despite Palin’s huge book sales and TV ratings, sources said In Touch sold about 500,000 copies on newsstands, about half the number it sold a few weeks ago with the late Brittany Murphy on the cover.

Maybe politics doesn’t sell supermarket tabloids. Or maybe it has something to do with that CBS poll showing a majority of Republicans don’t want Sarah Palin to run for President. Or maybe only Rupert knows how to make money off America’s most celebrated loser and quitter.

Or maybe printing DANGEROUS PREGNANCY next to a photo of Talibunny and Bristol with their babies wasn’t such a great idea.

If they really cared about sales, they would have posed them making out.

As I said, the funniest stage will soon happen when she gets even more desperate for fame and $.

the next person who sends me an email that ends in anything like this:

Forward this to at least 7 people

@FlyingChainSaw:
or at least nursing

@Capt Howdy: Or making out in the nude while nursing

my inet’s been down for 3 days. since i’m under doctors orders to only get my news from stinque and jon, i was dying to know what was happening in the race. phffft. not like i wasn’t expecting it…still.
if she was the best they could come up with, as prommie says, we’re gonna need a bigger boat.

the first thing i saw was johnny mill news. a man who came uncomfortably close to puppet of the free world doesn’t think a condom is a good idea.

and if that doesn’t make me nauseous enough, i’m off to the airport in 20 minutes to pick up neocon dad, stepmonster, and her girlfriend–to run interference.

went to the hair salon yesterday, walked in and was greeted with, how are you!? how is sergio!? burst into uncontrollable sobbing, which caused everyone in the shop to chime in with their diabetic collies, poodles with congestive heart failure and more dead dogs. the entire shop was bawling in 15 minutes.
i’m just a ray of sunshine.

@baked: Just to make yours and everyone’s happiness complete, the humble, non-activist, original-intent Supreme Court just ruled, as our forefathers surely intended, that corporations are people and nothing, nothing can interfere with their first amendment right to spend money on election propaganda. In other words, campaign finance reform, buh-bye. Still reading, trying to get to the part where they get the right to vote, and to find out how the court deals with nascent corporations, at what stage in the incorporation process does it happen that the corporation’s right to life supercedes the incorporators’ freedom to choose to abort the process.

@Prommie: Perfect now Murdoch doesn’t have to stop with buying Newt Gingrich. They can set up their own PACs and 527s and mount year-round 24/7 attacks on things like the EPA and SEC. Fronts named things like ‘Patriots for Freedom’ can advocate the complete deregulation of financial services firms so that any investment instrument and any claim made to sell it is regarded as ‘an act of god’ animating the invisible hand.

@Prommie:
see back suggestions in the other thread.

Sarah’s people can’t read. Buying her book is different because it’s like a keepsake as well as a way of giving directly to her. Besides, you can get free magazines over at the chiropractic.

@Prommie: I’ve been saying for a while that we are living in a science fiction corporate society. We have less to fear from Skynet than the Inc.

Justice John Paul Stevens read a long dissent from the bench. He said the majority had committed a grave error in treating corporate speech the same as that of human beings.

for non-legal types – it is very rare that a dissenting justice reads her/his dissent from the bench – happens only a couple times a year. That’s as close as you can get to saying F-U to the majority. That, and not inserting “respectfully” between “I” and “dissent” in the last sentence.

@FlyingChainSaw: I like your “act of God animating the invisible hand” theory. I think Roberts would buy that, and simply declare the SEC and the FTC unconstitutional.

And that fucking corrupt catholictard illegally exported his children from Ireland, you know, an obvious case of a very shady, illegal adoption.

This is something I can’t understand about US Americuh. Why are corps treated like people? Only thing I can see how someone could get away with that bullshit is if they bribed enough Supremes to do it.

Perversely enough, the doctrine used to assert corporate personhood is from the 14th Amendment, intended to help deal with repression in the South following the Civil War.

Good Morning, fellow corporate slaves! Has Haliburton harvested any of your organs yet?

@SanFranLefty: Santa Clara? Was it the decision itself or the clerk’s margin notes?

@Tommmcatt Say Relax: They sell kidneys in Israel, going rate is $100,000. Apparently, many Palestinians are desperate enough to sell one.

I read about the Supreme Court and got happier. Happy happy happy happy!!! And Obama has taken the blame. I feel better about everything. Because I’m so very very happy!!!

Hey. Johnny Earle made his share of mistakes. I know that. But I have forgiven him. It’s at times like these that a man needs a back rub. And maybe a little wrestling. I am reaching out to him man on to man but have drawn the line at driving to SC. At least today.

TJ, Conan Obrien is hitting high levels of funny, with this Bugatti Veyron skit, thats funny stuff there, I don’t care who you are.

I’m not sure why but it seems important that I post this from tfln.

I expect it has something to do with how happy I am. I’m so happy I’m taking it outside.

@Prommie: @SanFranLefty: Ugh. I saw that this morning while watching last night’s Craig Ferguson show. I had to turn it off when he said his ususal “it’s a great day for America.” No, Craig, no it’s not.

@Prommie: What’s to prevent me (or anyone really) from becoming Jamie Sommers, PC, LLC, LTD, PLLC, LDS, ETC, just to get around the individual limits?

You know, everything’s going to be fine. I mean, Nancy’s going to fight like hell to get health care through to —

OK. Let’s just call this the worst week ever and be done with it.

@Benedick:
I’ll have what your are having.

@TJ/ Jamie Sommers /TJ: Nothing. Let’s all go incorporate ourselves in Delaware!! We’ll have more rights and pay fewer taxes than if we were sentient human beings.

@SanFranLefty: Nah, come on, the court just held that the corporations have equal rights, not greater rights. We are already free, as individual humans, to spend trillions of dollars on issue advertising and political advocacy programming, any time we want to. This decision establishes, to paraphrase a famous quote, that “the law, in its majestic equality, permits both destitute people, and corporations with trillions of dollars in assets, to spend unlimited amounts on political “speech.””

@chicago bureau: Worst week ever so far, you mean.

@IanJ:
and
the weeks not over

if you feel you need to that is.
personally I like tan lines.

@Benedick: I’ve tried Texts from Last Night, Cake Wrecks, Cute Overload, passiveagressivenotes.com, Photoshop Disasters, even Project Rungay. Each of these charming little blogs gives me a temporary lift of levity, then the sad reality comes crashing in again. I can’t resort to alcohol until after work. Help?

this always works for me

Well, it’s official: USA is an oligarchy. Do we need to have new stationery printed to reflect the change?

@flippin eck: You might try calling your senators. I had a charming chat with Daniel at Schumer’s DC office. He was very glad to hear from me and I think my trenchant remarks re Democrats and/or caving gave him quite a lot to think about. I also called senator Reid’s office to suggest to him that he resign his post. Knowing that you have done your civic duty so that YOUR voice will be heard will make you happy. It has made me happy happy happy happy. I have been happy all day and I’m only getting happier with each fresh piece of news.

Right now I’m teaching the dogs Tomorrow (The sun’ll come out tomorrow. Bet your bottom dollar that tomorrow… etc) They already know I am What I Am and How Are Things in Gloccamorra so we have quite the concert ready for the summer. Which is good because music makes me happy. Happy happy.

I think I shall now go out into the garden for some interpretive dancing. To show the world how very happy I am. Then beat it to the liquor store. For some reason every time I turn on the TV I drink everything in the house. On a different note, the bulbs are coming up. They’re only about 4 weeks early.

anyone close enough to Benedick to stage an intervention?

Try not to get worried
Try not to turn on to
Problems that upset you
Oh, don’t you know
Everything’s alright
Yes, everything’s fine