Stinque
Home Latest Comments Log in
If it smells, we’re on it.
Stinque
Assholes, they do vex us.
Haiti 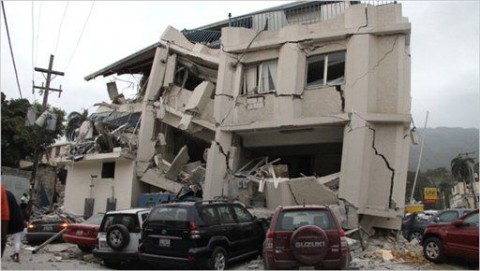 Haiti’s presidential palace and numerous other government buildings in the country’s capital Port-au-Prince collapsed after the tremor. A hospital was also flattened, with reports that patients were buried under the rubble.

Info at the USGS site: http://earthquake.usgs.gov/earthquakes/eqinthenews/2010/us2010rja6/.

That poor fucking country cannot catch a break. Three hurricanes in the past decade, horrible storms washing out the cities.

Linques for contributions to the UNICEF efforts in Haiti, the Red Cross, and Partners in Health featured in the amazing book Mountains Beyond Mountains.

And this is why we have evil government regulations like seismic retrofitting standards for hospitals and schools in California. Too bad the GOP in our state wants to get rid of them and the agency that reviews the retrofit plans.

Is baked still over in the Island Paradise? It’s about 200 mi north of Port-au-Prince. She may have felt it.

reds, i’m on the island, but i didn’t feel anything. i have such great haitian friends here, not to mention evilmammy. the situation has been horrific there for so long and now this, they can’t catch a break. my heart bleeds for that country and the families of dear ones in provo. there is always a story about haitians illegally entering provo. overcrowded small boats of people who have a 99% chance of drowning or getting caught and sent back by the coast guard. a village enclave of small villa’s is right down the street from me. it is at full capacity with brit and US coast guard. i used to live on the north shore, now i’m on the south shore where the illegals come in. heartbreaking. evilammy (monica) can’t reach her son there. tragic.

the average wage in haiti is 2 dollars a day…and they’re the lucky ones.
i’ve had a front row seat to haiti’s devastation over the last 5 years, it’s a pitiful situation. the legal haitians on my island that are friends are the best people you would ever want to know.
i’m piling up everything that isn’t bolted down to send over there via monica, who can’t reach anyone yet.

btw, i’ve been sending stuff to haiti ever since i got here.
do you remember the story a few years back when the coast guard was charged for shooting at a boat coming in. dozens drowned, some were shot, many children included. it made international news.
someone in haiti is wearing my grandmothers mink coat. i’ll be collecting stuff all day and taking everything to our local red cross, along with a check. the talmud says, if you save one life, you saved the world.
i’m making sure the families of my haitian friends here have everything they need…if they survived.

The GOPers really don’t get that whole reason why regs are there in the first place do they? They really are simpletons.

@baked:
Hope your friend hears from her son.

@baked: I hope she hears from him soon. Sounds like phones and electricity are out everywhere. BBC website quoting doctors there as saying they are lacking the most basic of medical supplies like bandages.

More charities with operations in Haiti:

@SanFranLefty:
I donated to UNICEF

The Doctors Without Borders trauma center is severely damaged.

Do we like these guys and will giving them some dough put me on the no fly list?

@redmanlaw:
Probably. Given the mindset of some in the intel community, giving money to a group who actually cares about human beings is considered a terrorist act.

They’ve had 11 aftershocks of magnitude 5.0 or better just today. I can tell you from L.A. experience that at mag 5.0, your heart starts pounding and you are wondering if this is the end.

@Dodgerblue: I can’t imagine a close-to-the surface 7.0 (and remember it’s logarithmic – a 7.0 is 1000 times stronger than a 6.0). The Mercali intensity scale (which is different from Richter or moment magnitude scales, as it measures the intensity felt at the surface) for the first quake was 11-12.

@redmanlaw: Médecins Sans Frontières is one of my favorite charities–I gave them a chunk of change in my family’s name for Christmas. It sure seems like they need it now.

@SanFranLefty: I think it’s a factor of 10, not 1000, between integer differences on the Richter scale, but that won’t make any difference to the folks in Port au Prince. We only had a few 5+ aftershocks to the 6.7 magnitude Northridge quake in 1994 — and that one was about 12 miles deep.

@flippin eck: Cool. I hope they at least have a Barnes and Noble for books and hanging out. Even Santa Fe has two Borders stores.

@SanFranLefty: That’s too hip for me, I’m still back in the 30’s with Charles Richter.

I just got my rebate card from my cell phone yesterday and just donated it all to Doctors Without Borders.

@redmanlaw: @flippin eck: @homofascist: Thanks for the tip. Just went there.

@Dodgerblue: @homofascist: @Benedick: The sadly ironic fact is I started giving to DWB when I wanted to figure out who was already present and well-placed to help in the wake of the 2008 consecutive hurricanes that devastated (you guessed it) Haiti.

@flippin eck: Such a terrific group. And since they have a French name and help poor people in hellish situations in developing countries, I’m sure the donations will put us on some sort of no-fly list. Have you read the book about Paul Farmer, who created Partners in Health in Haiti and Peru? You’d like it, I think. I may still have my copy of it, I’ll have to look in storage, if you’re interested in reading it.

@flippin eck, HF: Heads up: An IRL friend from the ancestral homeland who now lives in Chicago may be contacting you via FB.

@SanFranLefty: I am just hoping they deport me to France…

Early reports are pointing towards 100k+ dead – I can’t even begin to comprehend that, especially in a country of less than 10 million.

On a relatedly morbid note, the NYT had an interesting figure this morning: total 2009 deaths in the US attributable to “terrorism” (in a very broad sense, that includes the Ft. Hood guy) were 14, out of 14000 murders. Can somebody explain why there’s never enough money to help places like Haiti, but there’s untold billions to chase after people who, at best, managed to come up with 0.1% of the American murder rate? Fuck.

Footage of last week’s 6.5 in Humboldt County. Note the dog getting the hell out of the room three seconds before it hits. It’s amazing how animals can sense these things before humans.

@redmanlaw: I make a monthly donation to MSF and they still let me on planes. I did the quicky text donation to the Red Cross but will also send what I can spare to MSF.

I’m trying to wrap my head around the cognitive dissonance of Wall Street executives testifying on Capitol Hill to defend their obscene bonuses while there are scenes from Haiti of such abject horror of a hell on earth. One banker’s bonus could keep Paul Farmer’s hospital stocked with supplies for at least a year.

@SanFranLefty: Nature had an interesting episode on that topic. The most fascinating part for me was the man who’s been reliably predicting Left Coast earthquakes simply by noting upticks in lost pet notices in the newspaper.

As to the Wall Street execs, let’s just say that I wish I had the power to:
a) take their money and immediately send it all to Haiti, and
b) dispatch someone to enact FCS-inspired scenarios on their asses–anal pears for all!

@redmanlaw: Hooray for more IRL friends via Stinque! I’ll keep my eye out.

@SanFranLefty: For those concerned about Red Cross relief getting to those in need, this from the Miami Herald:

The American Red Cross was poised to move aid from a warehouse in Panama — blankets, kitchen sets and water containers for about 5,000 families — as soon as a flight or means of delivery could be found, Eric Porterfield said in Washington. In addition, the American Red Cross had already released $200,000 to its counterpart Haitian Red Cross.

@SanFranLefty: Oh, yeah, these things have their specific frequencies. I was working in Tokyo, grinding email, and I felt something go through me, a sound I could feel, extreme low frequency, massive amplitude, like a double bass the size of Tennessee having the E string bowed, but could not hear. Felt sick to my stomach for the rest of the day.

@flippin eck: The most intense earthquake I’ve experienced in my time out here was predicted by my pupster. I was in the kitchen with Dog of SFL making dinner, and all of a sudden she just went bat shit nuts – had a freaked out cowering expression on her face like she did when big dogs charged her, she charged out of the kitchen, ran in to the living room whining and moaning, I followed her saying “What the hell is wrong with you crazy dog?” to her, watched her as she proceeded to moan and whine and run in circles on the living room carpet. Five second later we were rocking and rolling for about three seconds. (This was a relatively small one – I think it was around a 4.7. It felt like when you’re on a boat rocking on the waves).

@FlyingChainSaw: Was that frequency the brown note?

@FlyingChainSaw: I know this from living in Cal my whole life. But the foreshocks to the 1994 quake were very different — like somebody punching you on the soles of your feet, but while you’re standing up.

@Dodgerblue: Right, it was time for the drum solo.

@redmanlaw: i like your borders joke.
no news. my haitian pals are freaked, as am i, can’t get through.
monica’s son, who escorted me to her daughters wedding is in school there, university. damn, what a bright charming young gentleman.
100’s of thousands.
oh fuck.