Stinque
Home Latest Comments Log in
If it smells, we’re on it.
Stinque
Assholes, they do vex us.
Developing Hard 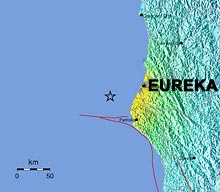 Let’s get you started with the USGS Earthquake Map, which every Californian should have bookmarked.

Sandra Hall, owner of Antiques and Goodies in Eureka, said the quake moved her shop in all directions.

Her store is now littered with broken lamps, dishes, and wardrobe items. She said there were at least four people in her store when the quake struck. A couple managed to run out of the store’s main entrance, while two women took cover under a table.

“We’ve been through a lot of earthquakes but I can’t recall there ever being any this bad,” Hall said.

The National Oceanic and Atmospheric Administration says there is no threat of the quake generating a tsunami.

USGS geophysicist Richard Buckmaster says the quake was felt as far south as Capitola in central California, and as far north as Tiller in central Oregon.

LA Times, 5:50 p.m.: Other than TVs toppling and a mall evacuated, no major damage or injuries yet reported. We’ll let the story rest here, unless we hear something later.

As the Car Guys often ask: what’s worse? To be on your coast with the mudslides, earthquakes, and fires, or to be on our coast, being slowly frozen to death?

@blogenfreude: I actually lived about a hundred yards downhill from the San Andreas Fault for a few years. Nothing notable.

And while quakes can certainly be spectacular, in SoCal it’s the wildfires that draw a lot more attention — they’re dependable.

Keep us posted on the CaliStinquers. I had USGS site bookmarked throughout our time in Japan and Costa Rica.

Everything seems to be reasonably safe, so I’m calling off the siren for now. Although with earthquakes, sometimes the bad news comes much later — and a 6.5 definitely gets your attention.

Having lived up and down the Left Coast (with family filling the gaps), on the whole it’s very mild here. If we had earthquakes with the frequency of snowstorms, hurricanes and twisters, it would be another story.

Besides: I can’t handle humidity.

Didn’t feel a god-damn thing, seeing as how I was in a car driving back from a suburbia shopping raid and bitching to Mr. SFL that “tights are not pants” especially when on the bodies of the corpulent. I’m sure all the potheads at Humboldt State had to clutch their bongs but otherwise all is well. Antique shopowners in California should know that you always put the stick-em stuff at the bottom of anything shatterble (word?).

According to my source, this EQ was on a subduction zone (where the plates meet off-shore), not on any of the faults. And my source on all things seismological informs me that what we should be most worried about is the San Andreas or Garlock faults in S.Bdo/Riverside/Imperial Counties, and the Hayward fault in the Bay Area.

@nojo: He meant they would move too … and after these last couple weeks, if I were a buffalo, I’d probably head for Key West.

@SanFranLefty: Power went out at Humboldt State, so lights out and light up.

And apparently the offshore intersection is called the Mendocino Triple Junction, which should be a mixed drink.

Fucking Harry Reid – when will Durbin or Schumer be Senate Majority Leader and there will be some head-bashing, brass balls, and fewer embarrassing statements?

ADD: Here’s what the EQ looked like on the seismograph in my basement. Any West Coast Stinquers want your own free USGS seismograph, talk to me off line and I’ll hook you up.

@SanFranLefty: Right after he inevitably gets defeated in the next election. What a maroon.

@SanFranLefty: Don’t count on The Schume – he’s bought and paid for. If it’s going to win, he’s in, if not, he might be out. He takes credit for shit he had nothing to do with. Sure, he’s better than Evan Bayh, but I’d like a Boxer. A big one.

@blogenfreude: Oh, a lefty California feminist girl can dream about Pelosi as SoH and Boxer as SML, but I’d be stoked to have Schumer or Durbin cracking heads in the Senate. Schume is bought and paid for but can kick ass when provoked, my choice would be Durbin because he has that sweet smile but he is not to be fucked with. Bayh is too much bland potatoes. Jim Webb would be fucking hilarious as SML, but he’s waaaay too junior to pull it off.

And what do you think about Harold Ford Jr. trying to become your Junior Senator from Nueva York? I have my thoughts, would love to hear a New Yawker’s.

@SanFranLefty: I think he should go back the red state he came from. I think it was nojo that pointed out that he could be bought for a shockingly small amount of money.

“Some people are different than the way they are on TV, but she is exactly the same,” dude told me. Also, got a HUGE hug from him, probably since I was so visible for his primary opponent. Still, surprised the shit out of me. Final note: should I have been nicer to the presemptive nominee for lt. gov? Maybe.

@blogenfreude: Great line, but it’s not one of mine. I was wondering more what it is about NY that it keeps attracting carpetbaggers.

T/J: Ravens 21, Pats zip in the first quarter! Looks like Brady will get to spend more quality time with the family.

@nojo: Herewith a theory. Except for Native Americans, we are all carpetbaggers or the descendants of carpetbaggers in this country, and New York is a place where the most recent carpetbaggers to these shores tend to agglomerate, so there’s lots of sympathy there for carpetbaggers just because they are carpetbaggers. Fellow feeling and all that.

@lynnlightfoot: “Nativist” Californians are truly amusing, especially when they hail from one of the Sans.

@Dodgerblue: Bye Bye Brady. Only thing about having no dog whatsoever in the current playoff fight is that I can just take glee when the mighty fall. Colts v. Chargers for the AFC title?

@Nabisco: Well, the fact that he is married to Gisele Bundchen might ease his fall a bit.