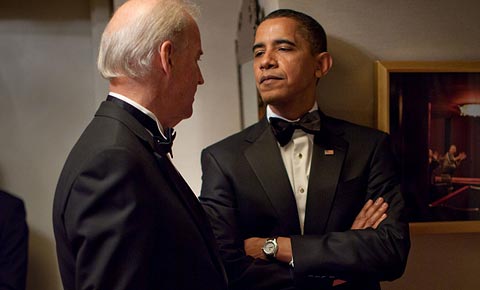 Back during the Democratic convention, we enjoyed lurking at PUMA liveblogs — with every cutaway to Michelle Obama sitting in the audience, there would be a handful of comments remarking on her “scowl”. Part of us wanted Obama to win just so we could enjoy Michelle looming over the Bitters as First Lady.

At least there was a flimsy excuse for their displeasure: If you were watching the convention on TV, the Michelle shots were inevitable. By contrast, Instapundit Glenn Reynolds had to dig through the White House Flickr stream — no, we never heard of it either — to fetch this winner of Barry & Plugz from the Kennedy Center Honors, posted December 16.

“Analyze the body language,” Glenn says knowingly. Well, um, okay, Joe looks like a putz, and Barry looks like he just slipped out of a wetsuit while headed for his first martini.

Anybody else? You, over there, the crazy lady who liked our anti-Wonkette post:

People who like Obama are blinded to the way other people see him. This picture strongly says cool to people who love him, but it doesn’t read that way to others… including the many, many people who don’t even want a cool President.

We certainly don’t mind having a President who can rock a tux, Ann, but that’s not why we originally supported him. (For that matter, many, many people voted for him, cool or not.) Nor is Obama’s classic evening wear the reason for our recent lack of enthusiasm.

But if you folks want to obsess over a thoroughly innocuous photo, fine by us. It’s not what you make of it, but the fact you’re making anything of it at all.

“Damn, Obama looks like James Bond in this picture.” [Althouse]

Isn’t Althouse the fucktard law professor blogger who married a homeless guy who worshipped her for her demented semi-literate posts?

Looks like Obama’s pissed about something. Of course, it is easy to conjecture on a single moment in time.

For those unfamiliar with the conservative dialect, allow me to translate:

“Just look at this uppity nigger in his fancy tuxedo, leaning back against the wall like he owns the whole world!”

Althouse is one of the best at bringing the stupid.

@ManchuCandidate: Biden farted. Without a doubt, that’s what happened and Obama is angry at him, holding his breath and trying to figure out if he should let one go, too, and blame it on Biden.

@Serolf Divad: I was just saying to the spouse the other morning that 2012 will be difficult for Hopey because more of the mouth-breather electorate will be seeing him as the “uppity-nigger” (though I also added “smart” which really means bad news)

Bond was never without a touch of wry humor — Sean Connery, that is, not those imitators. I don’t see that in this pic, so I have to go with Chainsaw over Althouse.

I don’t know why people construe this particular expression of Barry’s as pissed off. It’s his face at its resting non-expressive position. Some people can find that intimidating. I get the same response to my non-expressive face. Of course if people find it intimidating I say great! Fuck ’em if they don’t like it.

@FlyingChainSaw: Thanks, man. I needed the fart commentary on this Monday morning.

@AARPrick:
For me, I think it’s the narrowing of the eyes and the way Barry’s jaw is clenched.

I think I might look exactly the same way talking to Biden.

ps
hello and happy new year. hope you all got everything you wanted for christmas.

@SanFranLefty: Who is this douchebag?

@Dodgerblue: I have no idea.

rawstory.com has ’em both.

@redmanlaw: Well, there’s a great way to start the year.

A suicide bomber wearing an explosive vest killed at least eight American civilians, most of them C.I.A. officers, at a remote base in southeastern Afghanistan on Wednesday, according to NATO officials and former American intelligence officials.

If we can’t even protect our C.I.A. officers there, what hope does that leave for the soldiers and civilians?

I clicked on the link – wow, this Instafuckwit guy needs to get a life. Staring at WH press photos and thinking of ways to prove that Obama’s hand position proves he wants to kill white people is indicative of a permafuckwit condition.

@mellbell: Including the station chief, whom I under stand was a mother of three. Total, total security failure. Took out pretty much the whole CIA contingent at that base, I under stand.

@AARPrick: Anytime. I did a magnification and it’s really clear that Biden just informed Obama that he plotched and can’t move. See the way Obama has his watch facing out? Clearly a plotch-response pose.

@redmanlaw: I wonder how Cheney will explain that Obama helped plot and execute this attack.

@FlyingChainSaw: The dash to the aid of the friend’s child while on vacation was a ruse for the secret trip to Afghanistan to personally hand the bomber his vest and a prayer shawl. The minor health scare over Rush was a diversionary tactic with a toxin slipped into the talker’s usual daily drug cocktail by the ultra-suave tuxedo clad Undercover First Brother in a simple nighttime B and E.

@redmanlaw: It was only obvious! Who did he think he was fooling?

I think for added badness Obama should have his forearm replaced with an integrated RPG.

@FlyingChainSaw: 3,000 round per minute Dillon mini-gun.

Why, pray tell, would you call something that large and violent. a “mini-gun”.

@Tommmcatt is hunkered down in the trenches: Your answer, per The Source of All Human Knowledge:

The “mini” of the name is in comparison to designs that use a similar firing mechanism but larger shells, such as General Electric’s earlier 20 mm M61 Vulcan.

@redmanlaw: Yeah! He can bring it to the State of the Union address and pulp the fucking Republican fucktards.

@redmanlaw: Awesome. How long until the barrel melts in a combat situation?

@Tommmcatt is hunkered down in the trenches: You vaporize into red pulpy mist, you fuck! DIE!