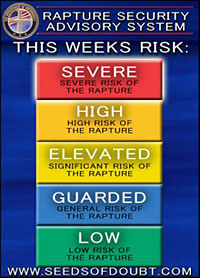 What better way to kick off a new year than a fresh prediction of our divine demise?

Never mind that Harold also swore by September 6, 1994. Sorry. Calculation error. Hell, anybody could have made that mistake. But hey, it was good practice for the people who gathered that day at the Veterans Memorial Building in Alameda, California. Holding their bibles open to Heaven. Waiting to die.

If you’re doing the math at home — and who wouldn’t? — you may question whether Harold should be using instead the mean tropical year of 365.24219 days, or the vernal equinox year of 365.2424 days. Or if you’re comfy with 365.2422 (the Council of Trent prefers 365.2425), you may still wonder whether Harold accounts for the ten days lost a few centuries back when Pope Gregory switched calendars on us. It’s also unclear whether we even need to mess with solar years, since the Gregorian calendar is supposed to account for such things with leap years and centuries. And if you’re really picky, it’s an open question whether we can rely with certainty on the date of a mundane provincial execution some two thousand years ago.

But never mind that. Eschatology is a crowded field, and competing doomithologist James Kreuger thinks Harold is full of shit. “For all his learning,” explains Kreuger, “Camping makes a classic beginner’s mistake when he sets a date for Christ’s return.”

Both of them are just being silly, of course. It’s Matthew 24:37 that holds the secret: “But as the days of Noah were, so shall also the coming of the Son of man be.”

Noah, as everyone knows, lived to 950 — and sure enough, the Rapture indeed happened on April 1, 983. We’ve been living a hell on Earth ever since.

Based on the Earf’s past history dealing with the “dominant” species. The end will be a combination of painful/quick (for the lucky ones) and painful/slow, but at a random moment and not predicted by some goober whose grasp of science is limited to “God said so.”

When I was but a kid, I think Harold had written about the end of the world in a book called 1994?. When I saw that in a bookstore, featuring the cover of a crispy Earth, it scared the shit out of me, and I cried and I think it fucked me up for the rest of my life. Why do you tell anyone, even children and pre-teens, that the world is going to end? There’s no reason to do anything to improve the world if a predestined date has been set, so why not work on your personal salvation, eat as much as you want, run your cars on whale oil and coal, and spray your crops with DDT.

@rptrcub:
I know people in denial who would rather have the world blow up than face the reality of their own personal failings.

@ManchuCandidate: I know I would.

As long as people order their affairs based on a belief that there’s an invisible man in the sky who cares about them, we are doomed. Religion has wrecked the world.

@rptrcub: Chick Comics are the alpha and omega of preteen holy terror.

@blogenfreude: I get that you think religion is inherently evil, and you have every right to share that. But to me, this statement sounds as judgemental and offensive as many of the things the christofascists say. Just sayin.

@flippin eck: @blogenfreude: I don’t think it’s religion per se that is evil, but some people’s interpretations of it that is the problem. And if they weren’t using religion as an excuse to be selfish, feel superior, oppress others, and do what they want, they’d find some other justification, trust me.
That said, saying Christ was crucified on April 1 really opens the door for jokes about salvation being one big “April Fool’s!”

My response, although sympathetic, won’t make the Stinque Faithful happy: If Man created God, Man has only himself to blame.

@Mistress Cynica: I know getting offended by anything is pretty passe around here, and I hate to think I’m the prig who always wants us to avoid generalities about religion. I know what y’all mean when you speak about religion and religious people, and 99% of the time I totally agree. I just feel compelled to “hold the line” occasionally to prevent us from succumbing to the same prejudice and superiority we all detest in those religious types.

That said, I think the world ending three days before my 34th birthday would be convenient, because that way I would never have to be older than Jesus.

@flippin eck: because that way I would never have to be older than Jesus. Or John “Ten Days that Shook the World” Reed, my personal jesus in college.

ADD: I kind of agree with blog‘s final point: Religion has been the excuse for an awful lot of misery in the world.

@nojo: I was discussing faith with Jr. over PB&Js, and posited the opposite to him: if God created Man, He’s sure got a lot of ‘splainin to do.

@nojo: @Nabisco: I think we can all agree that, one way or another, there’s a whole hell of a lot of ‘splainin to be done!

@Nabisco: But that’s just it: If not religion, some other excuse would be at hand. Power is always self-justifying.

@Mistress Cynica: I’ll say this much for Christianity: Original sin.