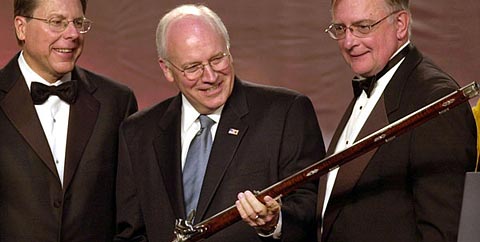 We were wondering when Dick would crawl out from under his secure & undisclosed rock:

[W]e are at war and when President Obama pretends we aren’t, it makes us less safe,” Cheney said in a statement to POLITICO. “Why doesn’t he want to admit we’re at war? It doesn’t fit with the view of the world he brought with him to the Oval Office. It doesn’t fit with what seems to be the goal of his presidency — social transformation — the restructuring of American society.”

But we have to give the prize to “former Romney spokesman Kevin Madden”, who despite being completely unknown, managed to get onto CNN this morning to drop this whopper:

You have to also remember the fact that the president being on vacation in Hawaii, it’s much different than being in Texas. Hawaii to many Americans seems like a foreign place.

Actually, Texas seems quite foreign to us. But if you’re keeping score, the Sarah Palin Hawaiian Yellow Peril meme is taking hold.

Cokie Roberts started that meme over a year ago when Obama visited his ailing nana during the campaign and she said he should go someplace more ‘Merikan like Myrtle Beach. Three quarters of the morans in this country probably don’t even realize Hawaii is a state: “Ain’t it like that Perto Reeco or Guam?”

@SFL: And yet Alaska gets a pass.

(Note to self: Try to adjust Stinque Mobile CSS so the text isn’t so damn tiny on the iPhone.)

Texas is part of the real Amerika. I know, I just got back from Oklahoma. Which, I think, is a protectorate or something of Texas. And it was traumatic.

Hawaii probly has fewer brown people than Texas, but is it time now to ponder about the influence of an established regional culture upon its immigrants?