Stinque
Home Latest Comments Log in
If it smells, we’re on it.
Stinque
Cassandra was right.
Comic Relief, Sport

Keep It In The Four-Foot

It’s been a while for a post from me.  Sorry — work, work, no usable internet connection at work, work.  So I need to come back with a bang. 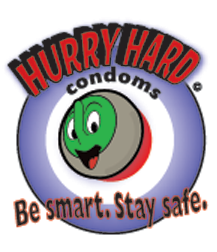 In that spirit, I offer the greatest thing ever.  Hurry Hard Condoms, sponsored by — yes — USA Curling.  (Curling is that sport that everybody falls in love with during the Winter Olympics after they get sick of wall-to-wall figure skating, and is the second national sport of Canada City.  It’s the one with rocks that people sweep, with brooms, up and down the ice, with people yelling HURRY! and HARD! at the sweepers.  Hence, the humor.)

There’s other curling jargon that is appropriate here, such as “the button,” “double takeout,” “hack,” “pebble,” “swingy,” and “biter.”  But I will leave that alone and leave you to contemplate whether curlers actually get any, thus necessitating the need for Hurry Hard Condoms.

[Also noted: while I was in Madison, I curled for a year.  It’s a great sport played by, well, almost uniformly dull people.  But curling is kind of out there.  Indie rock for accountants and insurance salesmen, perhaps.  And it is one of the ways good Wisconsinites and Minnesotans take out their aggression without killing animals.  So there’s that.]

Hey, I’ve thrown a couple rocks in my time.

Yeah, it felt odd. The team I played with would be out of place at the curling rinks I grew up near…

I have just one question: does this Sport necessitate the wearing of spandex?

@Benedick is Danny Tanner:
No. Ugly sweaters, comfortable pants and once in a while a Tam O’Shanter.

@ManchuCandidate: What the hell is the point of winter sports unless everyone’s wearing spandex?

@Benedick is Danny Tanner:
If you’ve ever seen the average curler, you’d understand.

The only time one really breaks a sweat curling is when you eat hot wings after the game.

I thought it was funny that “Feliz Navidad” was playing at the Chinese restaurant, and then “Little Drummer Boy” came on and I cracked up thinking of Prommy bitching about the song.

TJ/ Sarah alert! There is a huge yacht anchored in the bay here. We watched the helicopter land on its helipad while sipping cocktails at sunset. It’s now got all lights blazing with the Marie Antoinette arrogance of drill baby drill. The vulgar display of obscene wealth brought Talibunny to mind at once.

Oh. Right. And what distressed visor are you wearing to the beach?

@Mistress Cynica: Are they tossing dwarfs into the surf and shooting at them yet?

@Mistress Cynica: Oh please, sweet FSM, let it be Talibunny. And make sure Mr. Cynica has a video camera to record your interaction with her.

@Mistress Cynica: If you see her ask her why her mom told the media why she hadn’t read her book. Also ask her why everyone calls her Talibunny and why God hates her so much he stopped her from being president and ushering in apocalypse.

@Mistress Cynica: Be sure to ask if they are using Hawaiian children as bait when they go out shark fishing.