t’s ON! As the Senate health care reform bill nears a possible-maybe-if-Joe-Lieberman-isn’t-paying-attention chance of passage, a dispute is breaking out in the liberal blogosphere as to whether the bill in question (and the reconciliation bill that would result from the Senate/House conference) 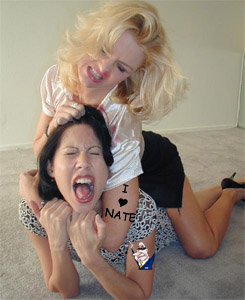 is an awful, shitty, rotten,
low, stinking, kick below the belt with a pair of steel toed boots right smack in the beleaguered crotch of working Americans, that’s worth supporting because, Goddamit it’s better than nothing; or whether it’s far worse even than that and should be put out to pasture next to the stinking corpse of Joe Lieberman’s sense of shame.

On the one hand, we’ve got every progressive’s favorite statistician, Nate Silver, crunching the numbers and suggesting that without the Senate bill, Americans will shortly find themselves wallowing in a hell-hole swamp of misery and disease as premiums for a family of 4 shoot up to somewhere north of $19,500.00 by 2016. With the Senate bill, Silver argues:

But whoa, there Nate, counters RJ Eskow on Crooks and Liars:

Silver is absolutely wrong when he says that “we can debate whether $9,000 is ‘affordable’ for a family of four earning $54,000” – we can? Really? – or when he says the individual mandate penalty is “not very harsh.” I’m astonished that anyone grounded in the real world could believe that these numbers (and those for higher middle-class earners) are not “harsh,” unaffordable, and even potentially devastating for middle-class people trying to get by in this economy. That’s craziness of the flying-rodent-feces variety.

Silver, in an update to his post, notes that most Americans will, in fact, pay ony $4000.00 a year in premiums (which by my calculation works out to $333.33 a month) and maybe $1000.00 in out of pocket expenses. It is only in those years in which a family member becomes seriously ill that said family can expect to incur an actual annual cost of $9000.00.

So who’s right? Well, if I may be so bold as to opine: they’re both right. Silver is indubitably right that failure to pass the bill will soon see ordinary Americans facing insurmountable health-care costs and massively expand the ranks of the uninsured. However, Eskow and others are right to be bothered about the high costs that the bill imposes on average Americans, and the problematic nature of an individual mandate minus the cost containing bullwark of a public option.

More problematic, IMHO, are the potential political consequences of this bill. I for one fear it could lead to the utter decimation the Democratic Party in the upcoming 2010 elections. In its current form, it seems tailor made for dishonest GOP attacks that cannot be easily defended against. The GOP will surely rail against the individual mandate as a massive, brutal tax on working families. And would you really like to be the one to defend a punitive tax (a penalty) on people who are too financially insecure to afford to buy private health insurance, and which will be used to subsidize the premiums of people who are better off financially than them? And finally, lets face it: Silver’s contention that most of these moderate income families will pay only $4000 to $5000 a year in out of pocket expenses unless they become sick is all fine and dandy, but also sounds a lot like the system we’ve got now: insurance that’s affordable… until you actually need it.

When Bush and the GOP bungled the Iraq war, torpedoed the economy, and watched as New Orleans drowned, I was among the many people who felt that the GOP could well have lost the House and Senate for a generation, or so. Now, just 3 years after the 2006 elections, I’m stunned to be wondering how the Democrats can possibly expect to hold on to power in 2010.

Ed: updated for the the tatoos :)

Well, a cheery good morning to you too, Serolf!

I think I still think the fallout from passing nothing at this point could be even worse. even for democrats. who admittedly are now between a rock and a hard place totally of their own making.

Lieberman’s DC office seems to have disabled the voicemail. You get the senate voicemail and can’t be put through to him without his box number, which is nowhere on his site. I’ve been calling all morning and the box was reported full till about a half hour ago when this started to happen. No one was answering at his Hartford office till I got a very disgruntled man who was not happy to hear I had just donated $1000 to MoveOn. Which is not entirely untrue. It did cross my mind till I thought of all the things I could do with the money. Like save for health insurance.

At this special time of the year let us ponder the words of GWBush: “It’s hard to think of Osama bin Laden celebrating the joyous holiday of Hanukkah.” There is a profound meaning to those words. Profound.

I’m stunned any of us would really care much who holds on to or loses power in 2010. The bus feels the same when it runs over me no matter who threw me under it.

@Pedonator: A third party can never win power in this country because the whole social system is either/or. Winners/losers. Yes/no. I blame Sport.

Franklin always said that political parties would spell the death of democracy. But he’s dead so who gives a fuck?

And I would repeat, we have never seen so much naked aggression and money ranged against the party in power. Not since the civil war. True, they were shooting each other but at least Lincoln didn’t have to contend with viral email. Whatever happens with health care we’re going to go through it all again with global warming. And then immigration reform.

@Benedick: I agree about the naked aggression, but money? The Democrats are raking it in, and their corporate paymasters are getting good value for their money.

Of course, in a world where politicians actually had a sense of shame, the Republicans “mandate is a punitive tax” idea wouldn’t even be brought up – given that they’ve directly opposed and threatened to repeal every single thing that *might* act to bring those premiums down…

Unfortunately, we live in the real world. So I’m sure the 2010 campaign will be filled with “Obama made you buy health insurance, started the war in Afghanistan and created the entire deficit (all $14 trillion+) in the last 18 months!!!one!!!!!” and the like.

That’ll be the three sentence summary for the majority of yokeltards who sharpen their political viewpoints on e-mails beginning with FW:FW:FW: Re: Obamacare Nazi Death Panels just like Stalin.

I can’t take this anymore. Kittehs and goggies!

Guess I should have vote for Swampsow after all. No fucking difference, except she has fucking balls. In my tinfoil hat world her relative obscurity since being Secy of State, will be her saving grace ( I had nothing to do with any of this, I was saving the Middle East) when she challenges Hopey in 2012 and kicks his taut brown tush. Oh also she gives a big ” I told you so”.

@Pedonator:
I think the problem is republicans are strategically spending theirs to win and the democrats are banking it for when they “retire” on 2010.

So, are we still looking at implementation delayed until 2014? Because even under last week’s model, I don’t see that as much of a campaign advantage in 2010.

TJ: Somewhat related, along the “who’s getting fucked by Republicans today” axis:

A who’s-who of RW sexual deviance… some real howlers buried in there, for instance:

Republican anti-gay activist Earl “Butch” Kimmerling was sentenced to 40 years in prison for molesting an 8-year old girl after he attempted to stop a gay couple from adopting her.

I think it’s awesome that you are so involved in your adopted Democracy, coming, as you do, from a savage isle to the west of Denmark. Many are the civilized folk that don’t involve themselves in the process, but here you are, using a phone and everything.

Step 1) Donkey-punch the people who voted for you until they lose consciousness/expire.

Step 4) Blame future election losses on being to gawdam librul–keep moving to the right.

May I just say that I am really fucking tired of seeing the “Stop Government Healthcare” ad in the left panel?

@rptrcub: I see the ad, but I’m not allowed to click through to see where it goes. (Google rule.) If I know the URL where it lands, I should be able to filter it out.

@Original Andrew: Is that you, Rahm?

@Pedonator: Gots it. The filter may take a few hours to kick in.

@nojo: @Pedonator: My sanity thanks you.

@Tommmcatt is hunkered down in the trenches: I have the White House on speed dial.

Does anyone know yet if Tone will have to spend the rest of his life in the White Tower for sniffing Yanqui bum somewhat too enthusiastically?