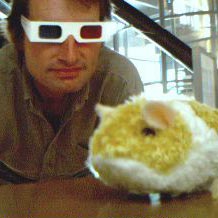 We don’t normally buy into conspiracy theories, but a story breaking Monday is making us reconsider our position:

Last week, consumer website GoodGuide said its testing had shown that Mr. Squiggles, one of the Zhu Zhu robotic hamsters that have been selling out at stores nationwide, contained levels of antimony above what the federal government considers acceptable.

For the record, the Nojo Hamster meets all quality standards of the Consumer Blogging Safety Commission. Reports of the Nojo Hamster containing excessive levels of antagonism are unfounded, especially compared to the Michael Moore Bobblehead, which has been known to explode when handled improperly.

In any event, we take offense to government-mandated antagonism standards, and consider this a brazen attempt by the Obama Administration to stifle dissent among erstwhile supporters. Comparisons by unnamed White House sources of the Nojo Hamster to the notorious Richard Gere Gerbil are particularly sleazy, and Politico should know better than to run the story without asking us for comment.

Also please note that the Nojo Hamster is not called “Mr. Squiggles”. That name is reserved by Nojo for purposes that remain off the record.

My gerbil pie recipe calls for two parts antipathy, one part indiscretion, a pinch of essence of sarcasm and a dollop of je ne sais quoi.

That last ingredient is especially crucial.

For a moment, I was wondering what the hell does a kid’s toy need antimony?

Then it took a while and a google search.

If it’s not one thing it’s another compromise.

Sort of the same sad compromise with air travel. For some reason, idiots built homes in and around airports to sell to other people who are oblivious and/or desperate then they bitch about the noise. To reduce noise, planes have to take off at high speed and at high angles. To do so, they burn a shit load of fuel which in turn produces way more CO2 than a lower angle takeoff does.

Isn’t it like a GOP tradition to stuff hamsters up your ass?

Hey, my great State is ganna pass teh ghey marriage Thursday! Yay for us! I do believe that it might stick, here, we just don’t have enough yahoos to mount any kind of strong movement to undo it, if the legislature does it, and we don’t do referenda.

Here to debut my mad linking skillz (courtesy IanJ and Capt of Howdy) comes this tidbit courtesy of the Partay of NO! Or, what part of ‘fuck off, you creep!’ didn’t you understand?

Link not suitable for lefty. And posted here not in the spirit of enablement but rather as… um…

ADD: And it WORKS! Huzzah!

@Benedick: Choking her to unconsciousness and punching her in the face several times is *only* 2nd degree assault? I shudder to think what the standard is in Misery for 1st degree assault.

P.S. Nice job with the kinky.

@SanFranLefty: It’s so disgusting and so much a part of who they seem to be these days. And yes, I hate to think what rates as 1st degree.

ADD. All your base are linked by me.

So I had a job interview this morning that I prepared for all day yesterday. Only I forgot to prepare questions for the “do you have any questions for us?” segment. Shit. Double shit.

The Tiger situation is beyond belief.

Turns out that he was admitted and treated at the hospital as an overdose case.

Yet when the cop asked for a subpoena to get a blood test to see if he had been driving under the influence, the prosecutor declined, said there was insufficient evidence. Seems to me that if you crash into a tree in your own driveway, have to be pulled from the vehicle and taken to the hospital to be treated for a drug overdose, you just might have been driving while intoxicated. A prosecutor might be getting in trouble here.

And at 2:30 this morning, Tuesday morning, Tiger’s mother in law had to be taken to the hospital in an ambulance, summoned by a 911 call. What The Fuck?

@Prommie: I guess we now know why he was so keen on his privacy. There’s a lot fucked up shit going on in his life.

Looks like our firm and family plumber accidentally killed someone on our snowy streets yesterday, up in the Richie Rich ‘hood up in the foothills east of town.

Woman killed on slick road
Police say driver tried to revive victim, whose own vehicle had slid off road

@redmanlaw: How terrible. That whole thing sounds like one of my worst driving nightmares. I feel bad for both your plumber and that woman’s grandmother to have to see that happen right before their eyes.

@Prommie: Check this out.

You rule. I thank you, and my husband thanks you.

Really, damen und herren, check it out. The Feature Animation people (the artists, not marketing) are calling this a new holiday classic- and artists are a tough sell on anything (Mr. ‘Catt didn’t like Kung Fu Panda). They’re saying “classic” about Princess and the Frog too (I’ve seen it and I agree). AND I’m hearin great stuff about the new Pooh feature hitting theatres next year (still in anamatics but Mr. ‘Catt loved it when he saw it).

Lassiter is starting a new Disney animation renaissance, mark my works. If I still have a job here in January I’ll be stoked about it.

@SanFranLefty: “(1) A person commits the crime of assault in the second degree if the person:
“(a) Intentionally or knowingly causes serious physical injury to another.”

In my state, second degree assault carries a presumption of incarceration, 10 to 20. Aggravated assault, is when a deadly weapon is used, or the injury is worse.

yes! gay marriage in new joisy! and the first state to abolish the death penalty…and then there’s bruce. joisy gets a bad rap, it ain’t so bad.

@Jamie Sommers:
ugh, so sorry jamie, i know you’re kicking yourself. this is an important part of the process to grill them, act like you’re doing them a favor. can you call with questions?