Merry Christmas from Tiger and Elin 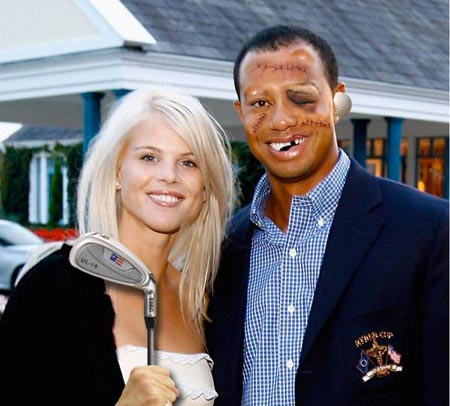 In case this hasn’t landed in your in-box yet, it will soon. The genius is unknown, but the original is here.

Maybe Christmas present will be real healthcare reform, rumours today say that, mirabile dictu, the senate is seriously considering “medicare buy-in” as the public option. Holy, in other words, shit, its medicare for all who opt for it, thats almost as good as medicare for all!

The Xmas Letter would be interesting:

This year was interesting. The kids are doing amazing. They’re growing up so fast and they’re a handful.

I’m doing fine, better after I whacked that 10 timing bastard in the head with one of his golf clubs when I found out about the Party Hostess in Vegas.

and then the Hooters Girl. As you can see, Tiger was a busy beaver fucking all these women behind my back.

From Elin, the kids and that slimy poonhound of a husband, Tiger.

TJ: Does anyone out there ever gain hope when they see some strong evidence that despite all appearances, the world is not really going to hell in a handbasket, and that as bad as it is, in fact, it has always been thus?

If so, take a look at this little item I found on craigslist, its an anti-Roosevelt pamphlet from the 1930s, and from all appearances, it seems to be exactly as crazy as the anti-Obama rhetoric of today

@Prommie:
I have been thinking this could end better than the naysayers expected.
this gives me hope I was right.

I think a lot of that had to do with Aetna’s stunt last Friday.

Just when you think the HI/HMO companies couldn’t get more evil and douchebaggy.

@Prommie: I don’t know that gaining hope is the most accurate phrase for what I feel after seeing that. It’s more like changing from thinking we’re going to hell in a handbasket to realizing we’ve been there for quite some time.

And let’s not forget John Adams (speaking of douchebags) ramming through the Sedition Act and using it to arrest Benjamin Franklin’s grandson who died in gaol awaiting trial. (Topic of comment inspiring old-timey spelling.)

@Prommie: The similar anti-JFK rhetoric has also been unearthed lately.

It was ever thus. Our mistake was thinking we had somehow finally outlived it.

@ManchuCandidate: If they really cared about cultivating their diabolical repute, they’d hire snipers on a success bounty to off the money-losing clients, stiff the snipers on their invoices – and then argue that since they didn’t pay for the clients to be killed, they’re guilty of nothing except for being smarter than everyone, hahahahaha, fuck you, die.

@Prommie: It’s all sandcastles until a final bill emerges from the conference committee, and we’re still a long drive from that. I wouldn’t get excited (or even guardedly hopeful) about any twist before then — you’ll recall that the Stupak amendment was a last-minute wrench that’s still causing problems.

I hate to be a humorless shrew but I find this anything but genius. domestic violence isn’t ever funny. It doesn’t matter if the injured party is a man and any cheating by Tiger doesn’t excuse his wife clawing up his face and perpetuates a stereotype of women as emotional animals who can’t control themselves. If this had been a mock holiday card of Chris Brown and Rhianna’s mangled face it would be horrifying. Why the double standard?

@SanFranLefty: No double standard. A mock card of Rhianna and Chris Brown’s mangled face would be perfectly acceptable.

but seriously, I do not see double standard. If anything, I think there is a gender divide in the perception of the Tiger story, women love it, they do, and woe betide a man who defends Tiger in the presence of women.

That we know about it now only because he may have been the victim of domestic violence, I think, the tolerance of the suspected domestic violence in this case, is actually a sign of a thorough rejection of the old double standard that men can fool around, but not women.

Hey, I, we, want gender equality, lets look at the two stories. It was once, in a sexist society, considered OK for men to beat their wives. Not so at all, and Chris Brown has been completely and unanimously derided and reviled for what he did. There is one old sexist practice dead and gone, and the reaction to the Chris Brown-Rihanna story is a good thing, its been nothing but condemnation of the man, and this within a subgroup (rap music) in which violence against women has had its last stand, still being glorified until recently.

And here with the Tiger story, the only reason people feel that, if the wife did go after him, people are forgiving him because he was trying to perpetuate another old sexist double standard.

@Promnight: I owe SFL more than a snappy comeback, but you’ve pretty much covered it.

@nojo: The story of this story is, that our whole society, male and female, is looking at Tiger, and saying, “Billionaire sports star or not, you cannot get away with that shit.” Thats a good message for feminism.

@Promnight: I don’t know that we need to bring feminism into it — but that’s not really for two dudes like us to say.

To the broader point, yes. Although I’m sure examples can be found, I don’t see anyone playing the Angry Bitch angle — the golf club is a Deus Ex Machina, and Elin just happens to be the mortal wielding it. It’s all about Tiger’s carefully manicured reputation and the corporate money shining it.

We’ll have to agree to disagree. I don’t think it’s excusable for her to attack him as she allegedly did. And a photo of a mangled bruised face DOES call the DV part of the story front and center. But again I may be a humorless shrew here – too much time spent working with survivors of domestic violence – male and female, gay and lesbian, very young, very old.

I think you shouldn’t hurt another person with violence. Even if you’re angry and upset, you should not harm them. Especially if they’re somebody you ostensibly love.

@SanFranLefty: Its starting to look like the assumption that she was after him with the golf club and seriously hurt him may be false anyway. It appears that ambien may have played a role, from recent word from inside the police department. There may have been a face-scratching incident in the house, but, if the scenario involved him waking from an ambien-sleep, he may well have been completely out of it, she may well have been pursuing him and smashing windows simply to get him to stop. And when the cops arrived, she had put a pillow under his head, and a blanket over him, and he was sound asleep. If you have ever woken someone on ambien, or been awakened, on ambien, this whole scenario becomes different.