Stinque
Home Latest Comments Log in
If it smells, we’re on it.
Stinque
This is America.
Teabaggery

We Are All Teabaggers 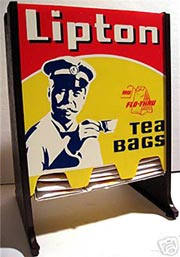 While everyone else is fretting about Barry’s 47 percent poll rating, let’s instead enjoy the day’s real news:

Running under the Tea Party brand may be better in congressional races than being a Republican.

In a three-way Generic Ballot test, the latest Rasmussen Reports national telephone survey finds Democrats attracting 36% of the vote. The Tea Party candidate picks up 23%, and Republicans finish third at 18%. Another 22% are undecided.

In case you think Rasmussen went Jaywalking — pause while we scourge ourselves for even mentioning Leno — “respondents were asked to assume that the Tea Party movement organized as a new political party.” So everyone knew it was a fantasy ballot ahead of time.

But today’s hypothesis is tomorrow’s reality, and we look forward to Wolf Blitzer sterning informing us how Teabaggers are getting licked by their opponents election night.

Please somebody make this happen. For the children, such as.

Wolf Blitzer:
teabaggers left hanging to twist in the wind.

this could be interesting:

“The president will talk about what it means to receive a Nobel Peace Prize in the wake of his Afghanistan decision,”

thats in his Nobel speech.

Barry will have to do the rhetorical equivalent of allowing us to look at the color white and convincing us that it is actually black.

On-Thread: I will give money to the “Tea Party” RIGHT NOW if they promise to start running wingnuts as soon as possible. Double money if they run specific wingnuts like Glen Beck or Randall Terry.

@Tommmcatt is hunkered down in the trenches: We’ve always been at war with Eastasia.

@Tommmcatt is hunkered down in the trenches:
the next election could be interesting because there may be primary challengers and even independent challengers from both the left and right.

It may have been as far back as the primaries that I noticed Barry was a master Triangulator who (unlike Hillary) doesn’t let the seams show. But, like early Steve Reich, reality is moving out of phase, and we’re getting a weird echo effect.

@nojo:
OMG
a Steve Reich fan!
“Its Gonna Rain” changed my life when I first heard it in the 70s

one of my personal pet peeves:

“This is sent to me with the absolute assurance that it’s a genuine picture taken by a flight attendant at American Airlines. The F/A took it to show her manager what was happening on the aircraft (757???) and why she was unhappy about it. Seems the guy paid for only one seat and the gate staff let him board.”

sorry
lose you fat ass or buy to tickets. (at least)

@Capt Howdy: Wayyyyyy back in the day, I did a Super 8 movie set to “Come Out.” The roots run deep.

@Capt Howdy: And since we’re going there, one of my desert-island CDs is “Music for 18 Musicians.” Between that and understanding Coltrane the first time, my life was set.

@nojo:
are you familiar with Harry Partch?

much more melodic but just as percussive and alien.

Castor and Pollux my favorite.

@Capt Howdy: I wonder how that guy even managed to walk down the aisle of the aircraft.

@Capt Howdy: By name, not by sound. My dance with minimalism was intense (the usual suspects: Reich, Glass, Riley, Adams), but after Nixon in China, I started wandering elsewhere.

@Jamie Sommers:
when you do not want to be in an aisle seat

@nojo:
Harry is not really minimalist. he is just sort of . . . . alien. it can be quite melodic, in a alien way.
you just have to hear it.

Working on a story with another reporter about the increasing similarity between Barack Obama’s policies and Hillary Clinton’s primary platform and whether Democrats might have viewed the primary differently if they knew then what they know now. Would love to get your thoughts on the state of buyer’s remorse. Might you be able to send me something before day’s out?

Ferchristsake. Please, please spare us any more Drudgico stories about “the left.”

Clinton and Obama are both mainstream Democrats who occupy exactly the same political terrain in the party and always did. That’s what made the primary so bloody. It was about personal identification, style and aspiration — the differences between the two camps were never about policy because there was no substantial difference in their policies.

This is a trumped up story about nothing. But then, that’s the Politico’s specialty.

dont completely agree. but she has a point.

@Capt Howdy: pourmecoffee on Twitter today, riffing on Politico: “There will now be a Pulitzer awarded twice every day — for ‘winning’ the AM and PM news cycles.”

Bearing in mind that I have a post in the queue that stems from a Politico story — I agree with Digby, but Drudgico has its practical uses.

To the broader point: Digby reminds us of what was observed at the time. Remember all the drama over the Unicorn/Swampsow healthcare plans, the difference between which was barely measurable?

However, the Disenchanted Left Meme is true. Even if you allow that some Obama supporters were prone to wishful thinking, in style & substance Obama has not even met our lowered expectations. Did he have to invite Rick Warren to the inaugural?

Teabaggers. Right. Let’s channel the most effete elitist group we could think of: tea-time Limey ladies/homos. Now let’s unleash the power of PG Tips/McVitties Digestives on the world.

‘Pass the cream, Mildred. Anyone fancy a fairy cake?’