Stinque
Home Latest Comments Log in
If it smells, we’re on it.
Stinque
Miscellaneous Top Secret Documents.
Sex Lives of the Criminally Insane 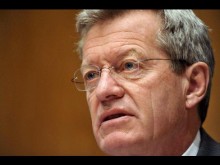 If the Democrats are going to compete with the likes of Vitter, Craig, and Ensign they’re going to have to do better than this:

Sen. Max Baucus (D-MT) did not disclose to the Justice Department anything about his personal relationship with a woman he recommended to be a United States Attorney, according to a Department official involved in the selection of federal prosecutors.

Baucus has acknowledged that he recommended his girlfriend, Melodee Hanes, to be the U.S. attorney for Montana, but it has not been previously known whether he or his staff told Justice Department officials about the relationship at the time of his recommendation. An official involved in the vetting of U.S. attorneys says that Baucus did not—a disclosure that may escalate questions about Baucus’ conduct.

I am so sick of this shitbag – if this takes him down, and he’s replaced with a Republican, would it make that much of a difference? Sixty votes are practically useless, as we’ve seen.

If the blue dog DINOs are going to vote with the Republicans when it really counts, why waste resources propping them up? They’re not on our side.

So Baucus supports the Pubic Option?

What’s really funny is watching all the pundits jump on this, while they pretend that it’s 100x worse than the Bushies’ shenanigans with the US Attorney stuff.

By all means let’s have an investigation; there’s no “sitting executive privelege” now…

@al2o3cr: I’m guessing this gets more attention than the ongoing investigation of Ensign, but I remain hopeful.

@nojo:
Only for lovers.

@blogenfreude: Well, Baucus is new, and novelty is news — especially given his role in the healthcare debate. He’s also a putative member of the majority party, and the indiscretions of the powerful are more newsworthy.

Give it a week or two to become Old News, and we’ll see where things stand.

It can’t be that great a relationship if he was trying to ship her back to Montana.

@Jamie Sommers: The Redskins beating the unbeaten Saints? What the fuck?

@blogenfreude: I don’t know but it’s a helluva good game.

@blogenfreude and Jamie Sommers: And the Raiders upset the Stillers. What the hell is the world coming to?

/still recovering from the joy of watching Tim Tebow cry and the greater joy a few hours later of the Longhorns winning their game with one second left on the clock.