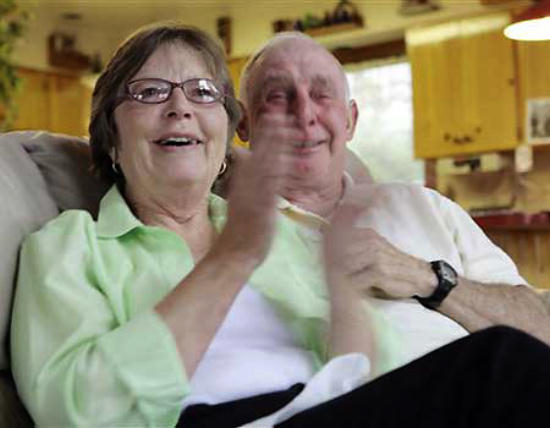 When you’re a Talibunny, the world is your stage and everyone in it is either supporting cast or a prop.  No one is exempt from their assignment in the Talibunny’s life drama as living valkyrie for an American neofascist movement – not even your parents.

The Dallas Morning News sent out a reporter to cover a Talibunny book signing event in Plano this week and a lot of the usual fuhrerette theatrics were on display.  Non-whites almost completely absent. Reporters were kept away from the Talibunny and not allowed to talk to the Talibunny, except to kneel in an assigned area and beg to sniff a discarded Talibunny undergarment.

Most disheartening, of course, was the sad abuse of the Talibunny’s own parents who were being dragged around the country like all the other props – husband Todd and infant son Trig were in tow on this leg of the Talibunny’s Pay Attention to Me Tour, as well.

Mother Sarah Heath made it clear to the DMN reporter how they’d been scripted to play the doting cutie-pie oldsters beaming with pride at their daughter’s success at being a failed sportscaster, failed mayor, failed veep candidate and failed governor – and otherwise discarded once they were done repeating their lines.

She admitted she had not yet read her daughter’s book but said she intended to.

“Nobody’s even given me a copy to read on the bus,” she said, laughing.

What a trooper. What an indomitable spirit. Her daughter devolves into a self-appointed field marshal of a neonazi movement and a global punch line representing America in decline and still Sarah Heath keeps on chuckling.

Which may be a sign of starvation-induced euphoria. Please, Stinquers, if you see the Talibunny’s bus pull up in your town, grab a six of good beer and a couple of sandwiches and make sure to search out Chuck and Sarah and give them a decent meal. If you can spare it, pack them a couple of blankets. Who knows where Talibunny’s handlers placed them on the bus – and if it is heated there?

And give them an extra pillow, in case Pops has the chance for ‘goodnights’ with his daughter. It’s not infanticide if she’s over 40, Gramps!

“I Was On Talibunny’s Book Tour And All I Got Was This Lousy T-Shirt… Which I Had To Pay For.”

@Nabisco: That’ll be a missed opportunity; remember, she’s in the Gulfstream while the ‘rents suffer in the tour bus luggage compartment.

@Nabisco: I swear I thought you were heading towards Chinatown with that. John Huston would make a great Pops.

OT, but are the quotes from the masthead archived anywhere? There’s been some truly classic stuff up there.

@al2o3cr: That would be the Daily Blurb Tweet. I used to provide the link in a sidebar, but most folks want the headlines.

i play a little game…i try to guess who wrote the post before i read it at the end. the minute i read “valkyrie”, i called FCS! FCS!!!
marry me?