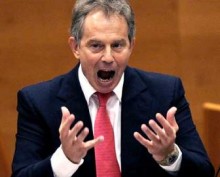 You could have knocked me over with a feather:

Peter Goldsmith, the Attorney General at the time, wrote to Blair eight months before the 2003 US-led invasion of Iraq, but the premier ignored the advice, the Mail on Sunday claimed.

Who, I ask you, is stupid enough to get conned by George W. Bush?  Bush fucked up everything he ever attempted – how could Blair trust him on Iraq?

The newspaper said a public inquiry into Britain’s involvement in the war was in possession of Goldsmith’s letter and he and Blair are likely to be questioned about it when they give evidence next year.

The inquiry heard in its first week that Britain’s ambassador to the United Nations at the time, Jeremy Greenstock, believed the invasion was “of questionable legitimacy”.

The Mail on Sunday reported that Goldsmith was “gagged” after he tried to dissuade Blair from lending Britain’s support to the war.

Somebody needs to serve some jail time.  And not just Tony ….

He didn’t convince Blair. He accepted a little invitation to the ranch in Crawford. There he was treated to a shit-faced W and a grim, tyrannical Cheney who presented him with photographs of him in a compromised position or recordings of him or his wife engaged in something unspeakably evil and bizarre. Cheney grabbed him by the balls and told him he was going to have to choose between having his gonads torn from his body or get in line on occupying Iraq and handing the oil leases over to his friends.

I’m such an attorney, or I really need a vacation – I read the first paragraph and my initial thought was “What’s wrong with taking a deposition of Saddam Hussein?”

@SanFranLefty: That should be Tony’s defense: “What? I thought we were just going to ask him a few questions, under oath.”

@SanFranLefty: Thanks. I’d been worried that being out of work so long had atrophied my legal muscles. I see now that’s a good thing.

@SanFranLefty: You obviously need a long vacation … or a large Ketel One martini.

Pop Quiz: What did Mary Tudor say would be engraved on her heart?

(You had to be there. Dynastic wars, breakup of Catholic church, loss of Franch territory won by Henry V as Franch exert muscle to create what we now know as Europe, major military disaster for England {not Britain}, bad news all round except for Elizabeth’s faction and various coronation planners and wig makers)

@Benedick: Did not know that, but I know that she and Elizabeth are buried within a few feet of each other – saw it on our trip. Sisters in the end.

@blogenfreude: Now that was a dysfunctional family.

@blogenfreude: And let’s not forget Edward.

@Benedick: He’s there too … buried in the Henry VII chapel – one of the most beautiful rooms there. Amazing that HVII had that done – he was a notorious cheapskate.

@blogenfreude:Fog digs deep. Once it gets in your lungs you don’t get out.

And is there honey still for tea?

HOLD IT HOLD IT — lest we forget that the source of this was the Mail on Sunday. Last I checked, it was tabloidy. See, e.g., the first paragraph:

Tony Blair was accused of a ‘gross betrayal’ of the Queen and Parliament last night after it emerged that the Government’s chief law officer warned him eight months before the Iraq invasion that regime change would be illegal.

Ooh! Ooh! Never mind his telling the House of Commons a pack of porky pies — Tony forgot that (in the immortal words of the Wu-Tang Clan) QE2 ain’t nuthin’ to fuck wit. That, of course, tears it. GUARDS!!

But also: the showrunner for the Daily Mail is a guy by the name of — I shit you not — Harold Jonathan Esmond Vere Harmsworth, 4th Viscount Rothermere. Dude’s backing David Cameron.

Not questioning the reporting at this point — just don’t be surprised if there’s a dialback coming.

(Also note that Tony doesn’t have a damn thing to worry about in the first place.)

@chicago bureau: When I was last there the Mail was a pretty good paper. As was the Standard. By no means was it the Sun or Telegraph. You can’t fault Limeys for funny names – as per Newt Gingrich – it’s a trick of fate. This investigation, as I understand it, is being conducted by the Lords so they’ve all got funny names. And you have to understand that they must abide by law in the UK, not Las Vegas. Much will seem strange. But it seems that perhaps someone might at last be prepared to prosecute someone for something – if that’s not too upsetting for everyone else.

@Benedick: Damn. No wonder he was drawn to minimalist art.

Or more to the point: http://www.google.com/hostednews/ap/article/ALeqM5h3md2ReGxE9CkpczxPehN4pM-z7gD9C773QG0

Ex-UK envoy: US focused on Iraq hours after 9/11

@FlyingChainSaw: Ugh. That makes me sick to read that. Physically ill.

@Jamie Sommers: Nothing Paul O’Neill didn’t tell us way back when ….

@nojo: @blogenfreude: All true. And by all accounts everyone knew this was a crew of face-biting psychopaths before they even took office with the neocon cult of death making clear their plans for decades. The angle of a secretary of state grabbing ambassadors’ hair and shoving their faces into her crotch and demanding service is new and deeply twisted shit.

These are the signers of the famous PNAC letter of 1998, urging Clinton to attack Iraq:

By the way, “Regime Change” was the official policy of the Clinton administration towards Iraq.

@Prommie: Go ahead. Inject reality into my day. Make me cry.

@FlyingChainSaw: You want face-biting pyschopaths? I’ll show you a face-biting psychopath, and this one is not a politician, he is a NY Times columnist, Tom Friedman, appearing on Charlie Rose in 2003, courtesy of Gleen Greenwald of Salon:

“ROSE: Now that the war is over, and there’s some difficulty with the peace, was it worth doing?

FRIEDMAN: I think it was unquestionably worth doing, Charlie. I think that, looking back, I now certainly feel I understand more what the war was about . . . . What we needed to do was go over to that part of the world, I’m afraid, and burst that bubble. We needed to go over there basically, and take out a very big stick, right in the heart of that world, and burst that bubble. . . .

And what they needed to see was American boys and girls going from house to house, from Basra to Baghdad, and basically saying: which part of this sentence do you understand? You don’t think we care about our open society? . . . . Well, Suck. On. This. That, Charlie, was what this war was about.

We could have hit Saudi Arabia. It was part of that bubble. Could have hit Pakistan. We hit Iraq because we could. That’s the real truth.”

@Benedick: Gotta go back to Roosevelt to find a real democrat, sad to say.

@Prommie: That’s all kinds of disgusting.

It was all about oil. And controlling China. That’s the only motive that makes any sense. As MoJo pointed out in 03.

@Prommie: You don’t get to play in the bigs without signing on to a certain set of principles.

@Prommie: Right, we needed lots of youngsters coming home with limbs and parts of their skulls missing to prove Tom Friedman has genitals. He needs to be kicked to death on pay-per-view.

@FlyingChainSaw: I have long felt that Manticore the white tiger should have a regular pay-per-view show, in which he is allowed to eat various deserving celebrities, like he tried to do with Roy. The revenues would exceed the GNP of all but the largest countries.