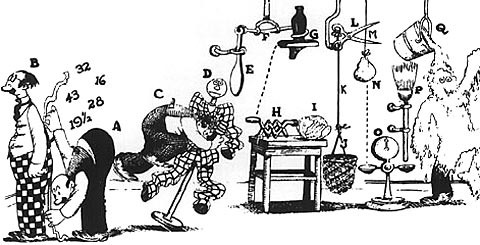 The UK Literary Review’s shortlist for the annual Bad Sex in Fiction award is out, and what better way to start the week than some lame fucking? The winning loser will be announced November 30 and receive a plaster foot. Which, we imagine, fits perfectly in the Stinque Award’s Crystal Shoe.

Damn, that’s what we get for outsourcing our research to Fox News — that last example of screwing the audience is from Glenn Beck, and not eligible for an award.

Please! I’m trying to drink coffee. On the edge of a precipice where ocean currents drag me down to a forest glade where water drips from moss to a stone that presses against a yielding soft warm place that feels like home.

Though I did enjoy Mr. Penis.

Say what you like about the English (Lit Review is most definitely English) they do get a better class of contestant. Do the same thing here and it’s all John Grisham and Stephen King.

Were I to organize such a prize I’d go for Most Alarming Sex; ie. sex that frightens the horses. While England Sleeps by David Leavitt springs to mind, bursting upon one’s consciousness in a way that can’t be denied. It’s also a smashing novel, kind of the gay Gone With The Wind but the hero does like to hammer his BF up against the nearest wall as often as possible with a great deal of splayed hands and imperious erections involved.

Or is it, Da, Komrade Bekc?

What the hell is it with totalitarians and their X year plans?

“Bobby starts scrabbling frantically across the carpet for Mr Condom, sending five or six multicolour Durexes flying through the air, and he struggles getting the packet open and Georgie has to roll Mr Condom down Mr Penis for him and she has to help insert him into Mrs Vagina.”

are they writing childrens bodice rippers now?
I want illustrations.

on the Merriam Webster top ten words of the year:
rogue

The relevant adjectival sense is: resembling or suggesting a rogue elephant especially in being isolated, aberrant, dangerous, or uncontrollable.

Shouldn’t Philip Roth have a Lifetime Achievement Award in this category by now?

Y’know, just the other day I was lamenting my lack of gettin’ sum, but I do believe this post has cured me of ever wanting sex again.