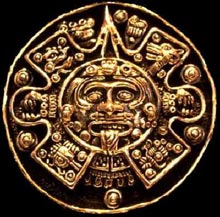 Frank Rich, who unlike us gets paid to blather, puts his salary to use:

Easily the most startling passage in “Going Rogue,” running more than two pages, collates extended excerpts from a prayerful letter Palin wrote to mark the birth of Trig, her child with Down syndrome. This missive’s understandable goal was to reassert Palin’s faith and trust in God. But Palin did not write her letter to God; she wrote the letter from God, assuming His role and voice herself and signing it “Trig’s Creator, Your Heavenly Father.”

Every week, when FlyingChainSaw doesn’t relieve us of the chore, we churn out a silly reader poll for the passing amusement of our devoted audience. So last Sunday, with that book about to be unleashed on an undeserving nation, we asked “What’s your favorite part?” And among the answers — currently trending first — was “The moment God tells her, ‘You’ve gotta be fucking kidding me.'”

We had no idea we had pegged the book’s most noteworthy passage. But if Roland Emmerich would like to buy the rights to our other apocalyptic predictions for his next disaster-porn blockbuster, he knows where to find us.

The Pit Bull in the China Shop [NYT]

Do I need someone’s permission for a threadjack on the first comment? Anyhoo, somebody must have pictures of Joe Liberman fucking a goat, because he voted with the Demo leadership on the health care bill last night.

@Dodgerblue:Don’t get too excited. He said this morning he still plans to filibuster the bill.

That’s why Gore Vidal derisively calls what goes on in public “show business.”

It’s the backroom deals that’re where the action’s really at.

@Dodgerblue: @SanFranLefty: Plus, O’Donnell pointed out Friday that the Clinton healthcare bill reached the Senate floor via conventional unanimous consent, no vote required.

I’m not sure Saturday’s vote counts even as a pyrrhic victory. The only bill that matters is the one that comes out of the conference committee, and we’re a very long ways from that.

I’m amused by the polls showing how concerned “Americans” are about the cost of the health insurance bill, and however in the world will Big Gummit pay for all its evil socialism?

You know what I’ve never seen? A poll showing that “Americans” are concerned about the cost of our Big Military and endless failed foreign wars. Are peeps really not concerned at all? Oh, fiddledeedee.

@Original Andrew: We had to destroy our country in order to save it.

@Original Andrew: Why do you hate our troops?

@Mistress Cynica: I don’t hate our troops but I sure do hate Frank Rich.

@Dodgerblue: They bought that prick off with something, mark my words. Otherwise he would be grandstanding this like crazy. Quiet Droopy means a bought off Droopy.

@Tommmcatt is hunkered down in the trenches: They’re calling Landrieu the ‘Louisiana Purchase’.

@Benedick: You’re on a roll today. BTW I saw “Love’s Labour’s Lost” this afternoon with authentic Brits from the Old Globe. They played it about as broadly as one could, including fart jokes. Very lively audience.

The modern “no taxes, no big gubmint, taxes are slavery, tea party patriots” movement (and you notice the logical connection to the Boston Tea Party, they were protestin’ taxes) is nothing whatsoever but the only remaining publicly acceptable way to express racism.

Thats what it is, racism. Its nothing but racism.

Its no wierd coincidence that we have this explosion of essentially anti-government sentiment, arising immediately that we elect a brown president.

Government, taxes, and all government programs, suddenly become evil, when the government is no longer republican and white.

My 9 year old came home a few weeks ago with a civics-history project, about the revolutionary war, in which he was asked to imagine that there was a tax on his favorite things, watching TV, playing video games, to illustrate why the founding fathers rebelled against taxes, why taxes are bad.

And I almost went ballistic and called the teacher, to tell her, “hey, moron, it was not and never was about “all taxes are bad,” it was about TAXATION WITHOUT REPRESENTATION.” I was coaching him to point this out in his written report on this experiment, but I am glad Mrs. Prom said lets not make our 9 year old a pawn in our politics, and I did make sure he understood, taxes are not bad, it was about taxation without representation.

These evil fuckers have been too succesful with this shit propaganda.

@Promnight: Y’know, short of calling the teacher, I would have gone with emphasizing the point in the report. Not because it’s foisting politics on the small fry, but because it’s the truth. The sprout’s free to make his own decisions about the wisdom of excise taxes, but silly me, I thought one purpose of education was to ground him in the facts.

Then again: Third grade? I don’t think we even cracked Johnny Tremaine until junior high.

Wasn’t the whole tea-party thing a stunt to help John Hancock’s business as a tea importer and to keep up the price? I need to re-read American Aurora.