Stinque
Home Latest Comments Log in
If it smells, we’re on it.
Stinque
Cassandra was right.
The 2008 Stinque Awards

Welcome to the 2008 Stinque Awards! 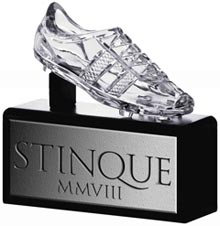 Where the hell is the tympani? We ordered a tympani. And spotlights. We insisted. Shit.

Well, shine a flashlight at the ceiling and pat your tummy, because The 2008 Stinque Awards wait for no incompetent vendor. We’ll be announcing winners every hour today, leading up to the Crystal Douchebag for Lifetime Achievement at 4 p.m.

The 2008 Stinque Awards for Achievement in Infamy are dedicated to Muntader al-Zaidi, wielder of the Footwear That Changed the World. This year’s award is a handsome Crystal Shoe created exclusively for Stinque by 24-Hour Novelties & Box Wine SuperStore of Tarzana, California, which also dropped a pallet of fine rosés, blushes and rieslings in the garage. Remember their slogan: “If we don’t have it, you can probably find it at the next strip mall.”

Our distinguished panel of judges this year included Yoda Pez, Cat Stick, and Fishtray. They were locked in a hermetically sealed drawer all week during their deliberations, breaking only for daily snowball fights. The decisions of the judges are final, allowing for last-minute bribes.

We begin our tympani-less, spotlight-less ceremony with the Technical Awards, a last-minute addition to our roster when members of the Nominating Committee insisted on being nice to a few people. Fine, we said. We’ll just bury them at the ass-crack of dawn.

Darling, I want to get behind this, I really do but…

Shouldn’t it be “Where the hell are the tympani”? And that plural construction seems somewhat suspect. According to my OED the plural form is tympana, and I don’t think we want to go there. Tympany, of course, is a puffed up overweening pride: “Puffed up with this Tympani of self-conceit,” as Burton has it. Sort of thing which leads to people invading Iraq for no good reason.

Safest bet is to do what the rest of us do and say “Cue tymps.” Which sounds somewhat insidery, as if one has only just finished the sitz probe.

I know I can bring this matter up because it will be received in the pompous, elitist, thoroughly effete manner in which it is intended. There will be no sulks and rolling of eyes at the regulars discouraging posts from lurkers as at some other bloggy thingy which shall be nameless.

Plus, who is Joe Strummer? Did I miss something?

Damn it! I’m going to be away from the Toobs most of today and will miss the unveiling of the awards.
@Benedick: Joe Strummer, from the band The Clash?

@Benedick: Ya need an old copy of Fowler’s Modern English Usage, its old enough to be fussy, its British, and to make it even more fun, its quirky and unpredictable, veering from prescriptivist to descriptivist and back based, apparently, on sheer perversity.

Churchill’s “we shall fight them on the beaches. . .” speach? Every word but one, Anglo Saxon. The old english words are good words, very powerful.

@SanFranLefty: There is a band called Clash? Is this well-known?

@Prommie: Yes, yes, Fowler. I have it. And read it for light entertainment. Does he trump Onions? I think not. Sidebar: Excellent recent book, Dictionary of Modern American Usage by Garner; Fowler for 21st cent.

But. I always think that if one has to reach around for the sense the word is best avoided. The audience sat on its hands is right but weird. Tympani, to me, carries unwanted associations with eardrums.

Ending the old year with a usage-fest? Priceless!

@Benedick: Did Fowler play in a band? No? Well, that’s settled.

@Benedick: Actually there was once upon a time (1976 – 1986) a band known as The Clash. They were advertised by CBS Records as “the only band that matters”, a title which was soon echoed by fans. Their album “London Calling” is considered a masterpiece of rock music.

One of the greatest potential benefits of blogging and text messaging may be the final extinction of esoteric “rules” to the English language. Let’s hope that within our lifetimes all of the bizarre rules of English usage versus American usage are completely forgotten and/or ignored.

@Dave H: Well, no, you see, texting is just new rules. New rules which provoke scorn in their adepts when one is unclear over usage. A way to set one subgroup apart from all others. The rules may change but they won’t go away.