Stinque
Home Latest Comments Log in
If it smells, we’re on it.
Stinque
Miscellaneous Top Secret Documents.
Brushes with Fame

He’s Still Butterstick II to Us 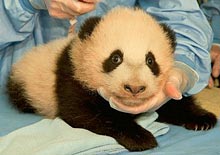 And since the Stinque Remote Office is located just thirteen blocks north of the Sandy Eggo Zoo, we really should have paid more attention to their brand-new adorable bundle of Pandaplasm, born August 5. Just for tradition’s sake.

But we didn’t. Nor did we think to prank the zoo’s name-the-panda contest, which drew 6,300 nominations.

What, “Barbecue” wasn’t good enough for them?

These poor creatures – they suck at reproduction, but they’re so cute that we keep locking them in rooms together.

@blogenfreude:
what does that say about sexual selection?

Ah, Butterstick sumer! Before my time. Lyndon wasn’t even a pimple on the backside of the internet.

@Capt Howdy: what does that say about sexual selection?

@Capt Howdy: It explains why pretty people report the news instead of smart people … the tyranny of the pretty.

Wait, how long have we all been together, now? I mean the Old W crew- not that I don’t love the comparative newbies, but I’m just curious. Like, 4 years, what?

Don’t look at me. I came on board shortly before the revolt.

@Tommmcatt is hunkered down in the trenches: Spring/Summer 2006 was when I auditioned to the Brand W. editors to get my commenter privileges. Can’t remember if it was Ana Marie or one of the boys.

@Tommmcatt is hunkered down in the trenches: Well, the First Official Butterstick Post is August 8, 2005.

We had to audition? I don’t remember that.

My first comment was a cut-and-paste comparing the recently-deposed Katherine Harris to Miss Haversham from Great Expectations. But I was lurking long before that. I remember how anxious I was, posting for the first time…you all were so funny…

@Tommmcatt is hunkered down in the trenches: For the longest enjoyable time, Gawker Media used the red rope to invite and threaten commenters — my own invite came from Lisanti, who liked a mockup I sent him of Giant Grazer Head replacing Mr. Defamer.

How did I slip through? They must no have been looking.

@nojo: I just remember reading some of the comments and then trying to think up a screen name that might appeal to the kind of know-it-all losers who haunted the place, hence Lyndon LaDouche. Of course, present company excepted.

That was a couple of breakdowns ago. Happy times.

@Benedick, ‘cattt, Lefty, etc: I thought”who am I? How do I let them know that I come from a different place than most?” Then there’s taking the archaic, patronizing term and making it my own. I don’t remember when I got on, or what my first comment was, but I think I specialized in the drive by, hit and run quick one. Prommie’s original name was the most terrifying one ever for all it said. I remember thinking about it one day while shoveling snow and getting freaked out.

I was lurking at W during the end (heh) of the Washingtonienne scandal, and became an utter slave to Butterstick, but I didn’t start commenting until that fall, or whenever AMC dropped the requirement that one have one’s own blog.

I started lurking at W because of Ana Marie Cox, who simply floats my boat and flips my switch and gives me the full-on shivering raging hornies.

The red hair, the fine skin, the tough snark, ohh, Ana Marie, you would not have wed had you known me.

Lyndon La Douche, of course! I had forgotten you were him.

We see you to little, my dear….

@redmanlaw: What was my name? Promnightdumpsterbaby? That was a cheap Family Guy reference, but I simply love it, Family Guy had an episode where they created a musical number, with all the promnight dumpster babies dancing and singing, twirling their umbilical cords, in a Broadway musical number.

But its also a reference to something serious to me, the strength of puritan, conservative religious attitudes towards sex, that puritanism and the feelings of shame it produces in the young raised in a puritan culture, that these forces are so strong that they create what I believe its a genuine mental illness, a state of denial in the minds of the young women in that situation, such that they simply refuse to believe they are pregnant, and that when they give birth, they are in such a state of denial they don’t believe its a baby. I truly believe this is a state of mental illness created by the culture of shame surrounding sex, this is the worst effect of the idea that sex is dirty and bad.

I have very real and genuine compassion for those young women in that situation, much as most would condemn them, I think they are suffering from a mental illness created by the evil preaching they are subjected to, which makes them so so completely ashamed of their sexuality that they freeze up and cannot cope and go into a pathological denial about their pregnancy.

@nojo: I came on board about a year after that. My test comment included a “Full House” reference, which probably appealed to whatever 20-something was moderating comments at the time.

Ducked out last night to go and watch Bob le Flambeur with what’sisname. Great movie. The original of Ocean’s Eleven but Franch.

@redmanlaw: Prom’s name was terrifying. And I always get a kick when you referred to ‘Son of RML’ or Wife of…

@Tommmcatt is hunkered down in the trenches: I changed to commemorate one of our recent defeats in the marriage merry-go-round.

i was lurking at W for nearly a year before i found you people…oh, the sacrifice!
i remember staring at the box thinking, audition??? i was so nervous!
then they accepted me, was more excited than getting accepted to penn.
and then, as the legend goes, i passed out pitchforks and torches and followed HF’s army marching into hell for a heavenly cause.
i’ve been here from the beginning…so why have i never had a tweet? ever.
loose audition standards.
now, 3, 4 years later, you all are my bestest friends. except noje…he hates me.

i have always been “baked” as in, fully, not half
i live for the baking sun
i am fond of the medicinal weed.
maybe it’s time for a change…heroin? (more play on words. as in heroine)

Ah! Who can explain noje’s strange quixotic impulses? I don’t even try any more. I am grateful for whatever crumbs fall from his table. Even though he has manipulated some aspect of the code (that is a technical term. Like bourrée) so I can never post links. I must believe that is true. Or else I’m too dumb to do it myself. And that could never be.

@Benedick:
good morning darling. waiting with breathless anticipation to hear of your play coming here……
(he’s being audited this week? really?) that doesn’t sound good.
but he has a joint bank account with God, so it shouldn’t be a hindrance.
break our legs!

REDS,
have i told you ratbastard is growing a ponytail because of you?
can world domination be far from our grasp?