Stinque
Home Latest Comments Log in
If it smells, we’re on it.
Stinque
Cassandra was right.
Duck and Cover 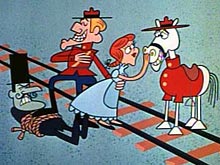 Orly Taitz has failed to pay the $20,000.00 sanction ordered by the Court on October 13, 2009. Accordingly, the Clerk is ordered to enter final judgment in favor of the United States of America and against Orly Taitz in the principal amount of $20,000.00. The United States Attorney is authorized and directed to collect the judgment as provided by law.

Orly said she had appealed, but it’s unclear whether her plea got misfiled in the recycling bin.

If I’m a patient of the “wetter, hornier, hotter” cavity creep then I’m going to be scared at my next check up. Each and every tooth is going to poked and prodded to find each and every possible place for a filling to help pay this.

@ManchuCandidate:
I didnt really understand that comment but I liked it.

@ManchuCandidate: I don’t think anyone would pay for a tug job from her.

Oh, you missed some good stuff yesterday, believe me.

I believe that’s a reference to this, particularly page 9. Have the brain bleach handy before reading…

@Tommmcatt is hunkered down in the trenches:
story of my life

While the investigation is being kept under tight wraps, a top government source, close to the case, told The ENQUIRER: “There’s evidence he was dumped by a lover.”

The ENQUIRER has also learned the 39-year-old Army psychiatrist had a deep-seated inability to deal with women that stemmed all the way back to high school – and he may have had homosexual relationships.

I know its the enquirer but they have proven to be about as reliable as the so called main stream media.

@Capt Howdy: Sounds as reliable as any speculation on Fox.

@Capt Howdy: So the “crazy gay Muslim” meme is about to be trotted out? Wow.

you cant make this stuff up.

Vatican: Aliens May Be Free From Original Sin

@Capt Howdy: See there? And you laughed at the marine with his gay muslim greek priest panic. Red blooded amurrican hetero boys live in constant fear of butt-rape. You could say they obsess about teh buttsex.

It’s almost impossible to get in that unless they want it, you know.

@Tommmcatt is hunkered down in the trenches: Unless, of course, you happen to be either drunk or asleep. In which case you won’t remember in the morning.

Hold on — does the Koran specify virgin gender?

@Capt Howdy: How generous of the Vatican!

@Pedonator: I hear Ted Haggard is ‘mounting’ a cumback.

Asked about the Catholic Church’s condemnation four centuries ago of the Italian astronomer and physicist, Galileo, Father Funes diplomatically says mistakes were made, but it is time to turn the page and look towards the future.

@Benedick: Waiting for the inevitable scandal could prove even more amusing than Johnston Watch.

@Capt Howdy: Here’s a suggestion, Father Funes: toss the whole goddamned Book and then look towards the future. I’ve got yer mistakes were made right here!

@Pedonator:
well
it took them 400 years to admit they boned Galileo so I will be ready to move on in, oh, about 400 years.

Father Funs? Does he live in the same rectory as Father Bad Touch?

Pure speculation here, but it seems that homophobic straight guys aren’t scared of the buttsex per se, rather that somehow they’ll be tricked into a ride on the baloney pony and enjoy it. I don’t think they’ve thought about what happens after that.

(Hint: There’s a shopping-spree montage at Crate and Barrel in their futures).

@Original Andrew: And Mitchell Gold furniture all over the fucking place. Not to mention much higher quality bedsheets. No wonder those homophobic straight guys clench their assholes in terror!

However, I might go with The Fugitive route next time. The one remake that is actually worth your time. I mean, Tommy Lee Jones as Samuel Freaking Gerard.