Stinque
Home Latest Comments Log in
If it smells, we’re on it.
Stinque
Assholes, they do vex us.
Masters of the Universe

Plutocracy on the March 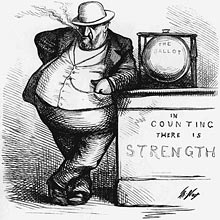 Michael Bloomberg may be sitting on a 15-point lead, but he’s not taking it for granted:

How badly does Michael Bloomberg want a third term as mayor of New York? The billionaire is spending $35,000 an hour out of his own pocket.

He could burn through more than $100 million on what is already the most expensive self-financed campaign in American history.

We’ll trust NBC’s research on this one, only noting that if true, Bloomberg is spending more than Ross Perot and Steve Forbes. And aiming low, in comparison.

Except that, unlike them, he will actually be able to buy win an election. And I suppose it gives him something to do. Some reason to get out of bed in the morning. And at least he isn’t Donald Trump. Or Giuliani.

If I had to guess, I would say there have been 20-plus pieces of direct mail from Bloomberg in my mailbox during the campaign. Our banner ad is telling me to vote for him as I type this. There’s one commercial for BT I wish he’d used more: this one.

Fucking pussy. He does not have the fucking balls to just hire assassins, condemn his opponents as enemies of the city and blow them the fuck away. I’m so fucking tired of these fucking pukes. He wants to run as the GOP candidate in 2016 he is going to need to be on TV holding the disembodied heads of his opponents and lapping at their dangling brain stems. Get with the fucking program, Mike!

@FlyingChainSaw: The B is anti-gun, remember? His guys will have to beat and sodomize opponents with clubs of 3/8 or 1/2 in rebar.

“Anyone can use a gun. It takes a real man to use a knife.” Anon.

@redmanlaw: That’s right. I knew I liked this guy. Deadly force. Up close and fucking personal. Bite the jugular. Feel the death. Laugh out loud at the spewing red foam and shrieks of agony. Anyone can use a gun. It takes a real man to hire a guy to reach down the throats of his opponents, grab their intestines and pull them inside out. Go for it, Mikey! Eat their faces!

@redmanlaw:
Guess who falls in that category?

I thought this was interesting: a letter in the Times (I know! Who knew?)

The causes and solutions of the USA’s persistent downturn are blindingly obvious to all but our bought-off politicians, too busy awarding political favors for special-interest bribery to tend to the national interest. They’re literally destroying the country.

I’m an old engineering professor, but the kids in my classes can say in one sentence what’s killing the US and our economy, since they’re hit hardest—the insatiable greed of health insurance companies and banks that handle student and other loans for our outrageously inflated health care and tuition costs. As they bankrupt an entire generation for profit, especially the banks that somehow are allowed to charge usurious interest for student loans and other debt after personal setbacks (like suffering crime, accidents or illness)—contribute absolutely nothing to the US economy in tradable goods and services. In fact they do the opposite, siphoning desperately-needed funds away from true producers and consumers, with nothing left over to spend on the real economy.

How can young grads in particular, starting their careers, spend money—let alone start businesses and innovate, to create jobs—if they’re forced into indentured servitude by these racketeers who seem to control US policy? Worse still, education and skills are devalued in the USA, while other nations prize educated graduates for the human capital they provide. Here, scam-artist consulting firms like McKinsey promote outsourcing as a one-size-fits-all path to profit, furthering the Faustian Bargain that defines American business: A few extra quarters of sham profit, in return for ruin of the broader economy. Sadly, before these corrupt executives are swallowed by the jaws of Hell, they ensure everyone else suffers mightily. Only countries like the UK and Australia—foolishly adopting US-style excesses—are likewise damaged.

This Potemkin economy is causing massive emigration of our best Americans, especially to East Asia and middle-Europe but also South America, all better places to work and raise kids. Emigration is not easy, but the push is there. Things have changed radically even for those staying in the US. For engineers and scientists, the US system has collapsed so completely that Chinese and German are returning as the chief international languages of our fields. (You must learn at least one—or both if you have the aptitude—and publish an increasing share of your papers, even start journals in them, to be competitive.)

These outrages need redress at once. More than a few politicians speaking up, more than citizens’ rebellions (via class-action and RICO suits) which devastate the racketeers with 1,000 cuts— sweeping reforms. The USA in 2009 resembles France in 1785, with the Marie Antoinettes in our corrupt corporations callously bleeding the most vulnerable dry to enrich themselves even further. Without reform, no gated community will protect the kleptocrats from the rage of a populace that has had so much stolen from them.

@Benedick: The Times of London?

The bailout we need: Forgive Student Loan Debt to Stimulate the Economy

@SanFranLefty: No. The NY Times. It’s the first letter in reply to an op ed.

I simply don’t understand how a country can gouge its students for money. I don’t get it.

@Benedick: I simply don’t understand how a country can gouge its students for money. I don’t get it.

@nojo: or, to borrow from Colbert and modify:

Facts have a liberal bias.