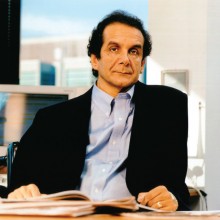 This wasn’t easy, what with Lieberman, Robertson, and Brooks in the running, but we have a winner:

It’s as if Obama’s presidency hasn’t really started. He’s still taking inventory of the Bush years. Just this Monday, he referred to “long years of drift” in Afghanistan in order to, I suppose, explain away his own, well, yearlong drift on Afghanistan.

This compulsion to attack his predecessor is as stale as it is unseemly. Obama was elected a year ago. He became commander in chief two months later. He then solemnly announced his own “comprehensive new strategy” for Afghanistan seven months ago. And it was not an off-the-cuff decision. “My administration has heard from our military commanders, as well as our diplomats,” the president assured us. “We’ve consulted with the Afghan and Pakistani governments, with our partners and our NATO allies, and with other donors and international organizations” and “with members of Congress.”

And check out this bit of fancy footwork:

In other words, Obama is facing the same decision on Afghanistan that Bush faced in late 2006 in deciding to surge in Iraq.

In both places, the deterioration of the military situation was not the result of “drift,” but of considered policies that seemed reasonable, cautious and culturally sensitive at the time but that ultimately turned out to be wrong.

Sorry Charlie – it is well documented that Bush/Cheney and their PNAC buddies (including you) had no plans for occupying Iraq.  Fuck you.

Charles Kauthammer is to a douchebag contest what a pit bull is to a box full of kittens.

No kidding – he should really just get the “Douchebag Lifetime Achievement Award” and be out of the running for the daily nominations. C’mon, we gotta give the other pundits a chance!

On a similar note, anybody willing to dig through the steaming pile of shit Charlie calls his body of work to find out what he thought of the Bushies blaming 9/11 on Clinton’s foreign policy? I’ve got a pretty good guess, even without doing any digging…

@al2o3cr: This doesn’t precisely answer the question, but it’s made of weapons-grade stupid:

For the last 150 years, most American war presidents — most notably Lincoln, Wilson and Roosevelt — have entered (or re-entered) office knowing war was looming. Not so George Bush. Not so the war on terror. The 9/11 attacks literally came out of the blue.

Among other things, I saw a documentary in the Mid-Nineties on Public Television warning of potential Muslim Extremist attacks on the United States. Oh, and “Bin Laden Determined to Attack in the United States” also too.

‘Unseemly’? Get you Ada for ninepence!

@Tommmcatt is hunkered down in the trenches: Ooooh! Varda the bona hommie!

@Tommmcatt is hunkered down in the trenches: I believe that Mr. Dick explained this obscure (to Yanks) expression in an earlier post.

Here’s a question. You know the phrase “queer as Dickie’s hatband”? Is the “Dickie” referred to the late Earl Mountbatten?

You made that one up.

I’ve been out sick. Catching up on comments is hell.

has anyone checked this guys passport?

I mean Krauthammer has GOT to be a made up name.

@Tommmcatt is hunkered down in the trenches: I also recall the matter of the WTC bombing in 1993.

@Dodgerblue: He wasn’t a Dick, he was a Louis. I’ve never heard that expression before. Did I ever mention ‘Camp as tits’? It’s a favorite. Mountbatten was a close friend of Coward’s. Perhaps that’s why he might be thought gay today. Coward based the captain in his very fine movie In Which We Serve on him.

@Tommmcatt is hunkered down in the trenches: ‘Get you, Ada…’ is more London slang than gay. There was a big crossover between the villain’s slang and the demi-monde – as it was. Second quote is parlare. That is a gay slang that comes from Edwardian theatre slang and is probably still used. There are some very funny clips on Youtube of Kenneth Williams and Hugh Paddick in their characters of Julian and Sandy, the gay Steppin Fetchitts of England, using parlare. Here’s a link that won’t work but you can cut and paste. http://www.youtube.com/watch?v=Q0I408B1jiw&feature=related

That man looks like he was beaten for hours around the head and face with the ugly stick.

@SanFranLefty: He fell from the tallest redwood ugly tree, and hit every branch on the way down.

He has no alibi, none whatsoever. He ugly, whoo whoo whoo.

@Benedick: “Dickie” was his nickname, until the IRA blew his ass to smithereens. I’ve seen the “queer as . . .” or sometimes “tight as . . .” phrase described as references to Oliver Cromwell’s worthless son Richard, but my knowledge of Brit History is not deep enough to know if that makes any sense. We don’t learn much about that over here, except for what’s on Masterpiece Theater.

File under “Those wacky Brits.”

“Krauthammer” is just the name they gave him; if you say his real name three times, it summons Cthulhu. :)

Supercilious, thy name is Charles Krauthammer. Btw, did Krauthammer and Shrub have smirking contests?

I was gonna say that Lieberman should have been DOTD, until I kept reading. Yep, that guy’s a fucking douchebag.

But seriously, Lieberman needs to leave. The earth. I’m starting to have the same ticks when I look at his picture as I do when I see Cheney’s.