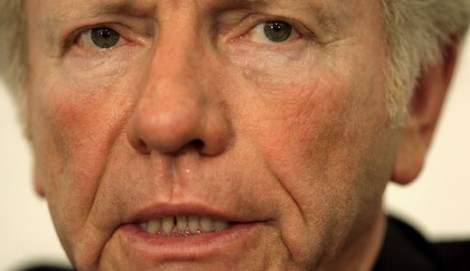 “I told Senator Reid that I’m strongly inclined — I haven’t totally decided, but I’m strongly inclined — to vote to proceed to the health care debate, even though I don’t support the bill that he’s bringing together because it’s important that we start the debate on health care reform because I want to vote for health care reform this year. But I also told him that if the bill remains what it is now, I will not be able to support a cloture motion before final passage. Therefore I will try to stop the passage of the bill.”

Lieberman is a whore who will do anything to stay in office.  Senator for Israel?  No problem.  Shill for big business?  Of course!

Ned Lamont needs to run again, and win.  Joe Lieberman must be driven from polite society.

Insurance company stock prices, Monday morning through this afternoon. The dip times with Harry Reid’s announcement that he’s supporting an opt-out public option; the spike corresponds with Joe Lieberman’s response today that he’ll join the Republicans and filibuster the bill.

Maybe he can stop’em, but he should remember that all it takes is one or two or more GOpers to break ranks and Joe Lie goes Joe Bye-bye Relevancy.

He’s a disgrace to Judaism.

Sack of oranges, I’m tellin’ ya.

And to think, with only 12 months left to use those Dem majorities before they go up in smoke.

@ManchuCandidate:
I think bye bye is going to be saying hello anyway if this is true and he follows up.
the dem caucus should make it simple (and I think they will). vote for cloture or get the hell out.
what the fuck good is he anyway.
60 votes? pfft

See, this is what happens when you keep giving in to his attention whoring demands. It’s worked before; he figures it’ll work again.

@ManchuCandidate: Since you mention it, I just added a chart of insurance stock prices from Monday morning through this afternoon.

On the other hand, the hot tree guy was here today and fed all the trees then cut down the mostly dead ash and left a nice big pile of wood chips for mulch. I was so happy I had to go outside and run about.

Is it just me, or is the cropped picture above a dead ringer for Senator Palpatine from Episode 1 and 2? If Ol’ Droopy starts shooting lightning out his fingers, that could make the debate more interesting…

@nojo:
I think when Harrys job is on the line, and dont kid yourself it is and he know is, he will yank like a motherfucker.

@nojo: Thanks – I was going to include that in original post, but I’m still reassembling my life after 3 straight weeks working 7 days.

I was thinking of dressing my dogs up and taking them trick or treating.
is that pathetic?

@Capt Howdy: You might to take a good hard look at this first. http://seriouslyomg.com/?p=12281#at

@Benedick:
oooooo
ideas!
but I think I already decided

I know it’s just Tuesday, but I’d like to nominate him for Douchebag of the Week.

@Benedick:
a few weeks ago a storm made a

in my yard.
I went out and bought two chainsaws, a regular and one on a 15 foot pole (what could go wrong), and went to work. I now have a clean backyard and enough firewood for this winter and next.

@mellbell:
I actually made it work by cutting and pasting.

@SanFranLefty: Hold the thought — the 2009 Stinque Awards are just two months away.

@SanFranLefty: Actually, in Lieberman’s case, I believe he has long since qualified himself as Douchebag of the Eon. Oh, how I wish he would disappear!

@Capt Howdy: Yes, but some Stinquers are, how shall I put it, technologically disinclined?

@mellbell:
so thats what they are calling it these days

Anyone else tempted to move to CT for the sheer joy of voting against Joe Lie?

I’ve heard that New Haven is actually quite nice, and there’s supposed to be tons of awesome architecture around New Canaan.

@mellbell: @Capt Howdy: nojo has some strange animus towards me that has him make my links not work. I don’t know what it is. I’ve tried to reason with him but he just hums show tunes and pretends he can’t hear. So thank you both. I’m not even going to start on how jealous I am of Howdy Dude’s embedded radioactive words that take you to other places as if by magic.

@Capt Howdy: Chainsaws scare the living daylights out of me. So it’s just as well the hot tree guy is only a phone call away. Last year he brought a Norway Spruce back from the dead. It’s not a hundred percent by any means but it’s looking better than it did and has started to sprout dangly bits.

@Original Andrew: CT is beautiful. We lived in Sharon for some years. It’s like NY with zoning. New Haven has great galleries, theatre, concerts etc. and is only an hour and some away from NYC.

I’ve always entertained the fantasy of moving to a small town and quickly becoming its most notorious bitch-slut, kinda like how Heather Locklear landed like a piano on the original Melrose Place.

Nowz the time to live the dream!

@Original Andrew: You do understand that small-town America is not quite like Melrose Place? On the other hand we never lock the house and the OH makes a point of never locking the cars and often leaves the motor running when he goes inside a shop. Of course, since we’re near Woodstock there’s no shortage of sluts of any number of persuasions. And several slut bars. On second thoughts, I take it back. It is just like Melrose place. Sharon was not. The town wouldn’t even allow a restaurant to open in case traffic disturbed the Buckleys.

@Benedick:
maybe its because I work for a game company but I thought the chainsaws were a good idea. in case of zombie attack I am totally covered.

@Benedick:
well
I live in a tiny town out side of a small town. and I never have to lock anything either but I would gladly start in exchange for a few sluts.

I can’t help it–I’m a maneater.

@Original Andrew: It’s all so tiring.

It’s mind over matter, but the beast is in my heart.

Document prep all fucking day (agreements and supporting documents for client tribe to take over programs and provide services normally provided by los federales.) I wish I was out in the cold air working with the chain saw adding to the wood pile. The overcast sky and weather report would add a sense of urgency and, unless one already had an adequate supply, give rise to the question of why the wood runs started so late in the fall.

After all that work I did a couple of weekends ago making my fence higher so the dog wouldn’t jump over and escape, Son of RML and I found out that he was now pushing on the gate and squeezing through the opening on the bottom corner. Crafty. Threw a garden bench and some wire rolls in front of it for a lo-tech approach. Now my backyard fence looks like the boundary of Jurassic Park all for nothing.

That Vegas roadie for U2 feels like it happened a month ago to someone else.

/ready to call it a day, but still has stuff to do

@redmanlaw: Honestly. Buried fence and collar. Changed my life. Dog took all of a half hour to learn. And he’s happier now he doesn’t feel responsible for patrolling half the mountain.

You’ve heard what’s going on here? NY State wants to collect tax on cigarettes sold at the casinos. I thought sovereign nations were just that. How can NY tax a sovereign nation?

@redmanlaw: Today is my first full day off in 3 weeks … job ended yesterday. I feel your pain. It’s nice to have a few minutes to organize your life.

@Benedick: From some quick and dirty work I did on this earlier this year, it’s my recollection that this has to do with the terms of the multi-state settlement with Big Tobacco and how taxes are levied on different levels of manufacturers and depending on where the smokes are sold and to whom. I think that the settlement states that sales by tribal members to other TMs on reservation lands may either be untaxed or subject to a lower tax rate. The tribes themselves are not formally involved, although there are some players who are trying to make it into a tribal sovereignty issue.

Some people are trying to drive a truck through the loophole. A couple here got charged with selling and possessing contraband fags (there’s a glam band name for you), mail fraud, etc. for selling untaxed cigarettes over the tubez to non-tribal members off the rez. States want to crack down on that sort of thing to keep Big T from walking away from the settlement for lack of enforcement.

And by the by, Contraband Fags LLC. Too bad I already got a name.

Joe is just screaming for attention, isn’t he? I think he is an angry, vengeful fucker, he is definitely not over losing that primary.

So which would you say is the most picturesque, romantic town or village in New England?

Dear Stinquers, I feel you are the only people I can ask to explain this furschlugginer cloture business to me. Every time I begin to believe I understand it, it turns out I’m still completely baffled.

Never mind re cloture. Just looked it up in Wiki, which means I will understand it for another twenty-four hours, possibly more.

@lynnlightfoot: Good for you, wish I could say the same. Just don’t ask about the Supreme Court. They will explain and our heads will hurt.

If you’re asking re a vacation, fall is over.