Stinque
Home Latest Comments Log in
If it smells, we’re on it.
Stinque
Lovely day for a Perp Walk.
Compassionate Conservatives 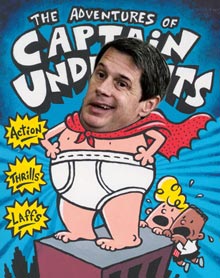 DiaperMan David Vitter, whom 47% of Louisiana Republicans would prefer to continue his adventures (we particularly liked The Perilous Plot of Political Poopypants), is not taking his renomination for granted among his state’s pigfuckers. Where other Louisiana politicos were quick to condemn the Non-Marryin’ Judge, Vitter took his time before finding just the right words:

Sen. Vitter thinks that all judges should follow the law as written and not make it up as they go along.

Vitter’s standards are clear. Criticizing a local judge who won’t marry an interracial couple is one thing. Calling for the resignation of a black senator from Illinois is quite another.

Wow, so Vitter is still refusing to say that refusing to marry an interracial couple is wrong. What a prick.

@Serolf Divad: C’mon, like you didn’t know that before.

@Serolf Divad: I know. You’d think that’d be a gimme. Even Gov. Kenneth (the page) Parcell said it.

Aren’t those “Love See No Color” tees about twenty years old by now?

@IanJ: You can but you won’t. And I can respect that.

@Benedick: I would, but all I can think of is frond.

The enema of my enema is my phlegm.

I’ve been trying to get him to for months now.

Wait, what are we talking about?

Sen. Vitter is trying desperately to squeeze in an 11’th hour citizenship question on the census to keep the mushrooming Hispanic population undercounted and underrepresented. Loathsome seems far too kind a description for this person. Even in the Senate GOP pack of prejudiced Know Nothings he stands out.

This is the kind of dude that gives diaper fetishists a bad name.

Let’s go Dodgers!! For fuck’s sake, not a repeat of last year!!

Hey Benedick, I’m going to see Love’s Labours Lost in a couple of weeks, with authentic Brits in the cast.

@JNOV: Hi. Ex-Dodger surfer dude Jason Werth just hit one in the seats with 2 on. Oy.

@Dodgerblue: If it’s any consolation, that bonging neon Liberty Bell is pretty dumb.

@Dodgerblue: One of my favorite plays.

Prince: Come, Sir, it wants but a year and a day and then ’twill end.
Berowne: That’s too long for a play.

Almost the best couplet he ever wrote.

Do you know it? Most of the play is based on the quibble. A joke we no longer recognize. Not quite a pun but something inbetween.

Stray Bint: Veal, quoth the Dutchman. Was not veal a calf?
Longaville: -Speechless-

See the Dutch like veal and his name was Longaville which sounds like veal and veal comes from calfs and calfs are like retards. The quibble. You will have such a good time.

Berowne:… For valor was not love a Hercules,
Still climbing trees in the Hesperides? Subtle as Sphinx
As bright and musical as sweet Apollo’s lute strung with his hair…

Gorgeous. And with the most surprising ending.

Rosalinde: Oft have I heard of you, my lord Berowne,
Before I saw you…

You will be weeping.

Who’s doing it? Where? Brits? Pfah! Who?

@nojo: Well, hey, at least we got Serolf out of the deal, eh wot? But wie gets Ewalda?

@The Nabisco Quiver are Go!: I will do it immediately if you promise to tell the story…

@JNOV: No joke. That straggly ass hair of his needs conditioner stat.

@The Nabisco Quiver are Go!: What’s the story?

@The Nabisco Quiver are Go!: It should show up any minute.

@SanFranLefty: Yeah, he missed the 9th-inning Phillaays win cuz he was in the shower. What a creep.

@The Nabisco Quiver are Go!: Better?

@JNOV: There’s still a porpoise-like P staring back at me; not quite purple, but never red. But I trust you…

@The Nabisco Quiver are Go!: Clear your cache. My avatar is no longer the Phantabulous Phillies P. I promise you.

@The Nabisco Quiver are Go!: But why? No reason to feel guilty, unless you’re not going to tell your story…

I’m afraid DB has taken to his bed.

@JNOV: Of course he would. Or he’s passed out in sadness at the Dodgers’ collapse and Uklah football losing to everyone in the Pac-10.

@SanFranLefty: No, I was at a bar, drinking some excellent black Porter with some fellow Dodger fans. I left when I just couldn’t handle the game any more.

@The Nabisco Quiver are Go!: You are so not off the hook, BTW.

@Benedick: I have seen it and read it, but can’t really say that I know it well. I’ll need to brush up on my Latin puns.

Here’s a linque to the production: http://thebroadstage.com/index.php/219. Eli Broad, after whom this wonderful small theater (only a mile from my house) is named, is a bazillionaire who is the pre-eminent patron of the arts in the Los Angeles area. He recently financed a new wing of the L.A. County Museum of Art, basically to display some of his own art collection including one enormous floor of Richard Serra installations.

@Dodgerblue: I already hear police sirens, and I live out in the ‘burbs. Jeez. We are a weird town.

@Dodgerblue: I woke up dreaming about LLL. If they do it half-way well you will have such a good time. It contains the best line He ever wrote. After the play-within-the-play falls apart and the priest runs away, Costard the clown steps forward and says:

A marvelous neighbor, faith. And a very good bowler. But as for Sir Alisander… You see how ’tis. A little o’erparted.

A very good bowler!!! What He packs into that line! I was prepared to travel to Brooklyn to see it. LA might be too far. I’m surprised. I didn’t think anyone went to the theatre in LA. That’s where shows got to die. I’m so jealous you’ll get to see that play. Have I mentioned that I love it? No, but srsly. You know how nojo gets about Jesus Christ Superstud? I’m like that about it.

Did you once evince an interest in the Gypsy Robe? I have pictures and I’ll post them if you want.