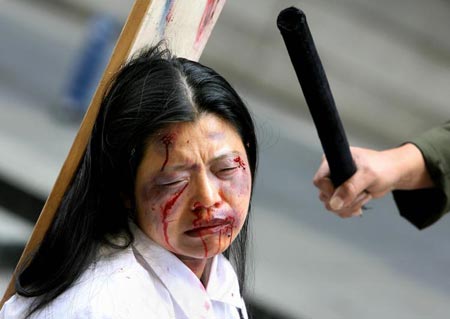 Thank God the GOP Has the Guts to Stand Up For the Torture, Rape and Murder of Women, the Things That Make America Great!

When Minnesota Sen Al Franken (D-MN) proposed the defunding of contractors whose employees entertain themselves with gang rape and hide behind contract rules that could expose them, the GOP went apeshit crazy with outrage.

The neomedievalists of the GOP who are dedicating every ounce of their strength to the dismantling of western civilization and to destroying the gifts of enlightenment saw something very important to hate in the bill.

The recognition of women as human beings, perhaps?

Limits on the extent to which the military-industrial-organized-crime complex can be encouraged to indulge in cackling barbarity, possibly?

No, it is clear that these Republicans are just completely besides themselves with gasping rage that they will be denied their privilege to join the bang gang during junkets overseas to war zones where their sponsors are busy looting America’s treasuries and perpetrating the kind of wanton murder, mayhem, rape and pillage that the GOP believes makes America great.

The inspiration for Franken’s defense appropriations amendment was the drugging and gang rape of then 20-year old woman named Jamie Leigh Jones who was stuffed into a box and told not to complain when she tried to finger the KBR Halliburton personnel who savaged her and nearly killed her in 2005.

Halliburton’s contract with Jones prevented from taking the case to court. The Franken amendment to the 2010 defense appropriations bill simply outlaws the Defense Department from contracting with companies “that require employees to resolve sexual assault allegations and other claims through arbitration.”

The folks at Politics Plus looked up the mouth-breathing GOP hillbilly gang rape enthusiasts that voted against the amendment, the guys who do not want their place in the gang bang line in Baghdad to be threatened by meddlesome left-wing moonbatry. Go ahead, call them up and ask if you can cut the line for some sloppy 72nd’s.

As Franken Shines, Republicans Show Their True Colors [Politics Plus]

(That picture makes me want to cry.)

McCain: I’m against torture … unless it’s of wimmin in which case, they should lie back and think of England.

Vitter. We know why his name is there.

Once again, I’m reminded that these people are representatives of their constituents. These are the people those fat fucks voted into office, because the mouthbreathers feel that the reps correctly represent their views on the national stage.

And with that profoundly disturbing thought, I’m going home and not thinking about this any more.

I missed seeing McConnell’s normal second vote (Bunning) tallied so I checked the list of names. There are only 20 names listed. The first 10 Republicans who voted against the bill weren’t included for some reason. Here are the rest of the good old boys:

@Jamie Sommers is an island: Yes. I’m going to grow some balls and put it up on FB.

@IanJ: I shudder to think how many of their constituents think she shouldn’t complain because the wimminz shouldn’t be in war zones. I also find it profoundly disturbing we have more contractors than soldiers in Iraq; all getting paid 10 times what the army and marine guys are making.

@Dave H: Good catch there – a Stinque overlord will have to update the list.

@chainsaw: That is an incredibly disturbing photo. Is it from Burma?

The list was from the blog post referenced. Looking at the official Senate tally, it appears somebody copied the second two columns, but not the first.

@SanFranLefty: I have no idea. The blood was pouring out of my ears and nose in a fit of blind rage, I just want to illustrate what these fuckers were defending as a right of the occupier. Fucking monsters.

@FlyingChainSaw: It is very disturbing, but does justice to the brutality that female contractor suffered. Maybe Burma, or China or even DPRK. The dark olive military sleeve looks to be from those parts.

I really cant wait to see how they run on this next election day.
seems like you could make some kick ass campaign ads off this.

Thanks, FlyingChainSaw, for this post. The entire GANG of THIRTY must believe they’re going to get away with this. I hope every Democrat in the country devotes herself or himself to hounding each member of the gang about this incessantly until all are bounced out of the Senate and then I want them hounded to early graves.

@lynnlightfoot: Oh, now, how you liberals go on, they were not voting in favor of rape, they were voting against excessive government interference in the free markets which stifles business growth and hurts american workers. If Haliburton and Mercenaries R Us are held accountable for the conduct of their murdering, raping redneck employees, how are they going to compete in the lucrative violence and war marketplace? The invisible hand will do a better job than these stalinist efforts to manage the economy by simply mandating a rape-free workplace.

@Prommie: They were killing three birds with one stone. A Nay vote was a big FU to Al Franken, a pander to Massa Cheney and all who profit (including themselves) from increasing the sum of human misery, and a perfect opportunity to indulge their misogyny while pretending instead that they were concerned with economic expediency and with combatting what they were trying to characterize as petty politics from the Dems.

Not off-topic: I just found today a splendid bit of wisdom I had never seen before, supposedly Ezra Pound citing something from Confucius: “A man’s Paradise is his own good nature.” Each of those thirty senators inhabits his own custom-built Inferno.

@lynnlightfoot: Right, forevermore these assholes are to be called the Rape Senators or their party and districts denoted (R-Rape, XX).

@FlyingChainSaw: Absolutely, this is how we should all refer to them. I think we need to keep that tally of 30 on the side somewhere so we remember how to refer to them. I must say that as a Vagina-American, I did exhale to see that no female Senators, including the female Republicans and Kay “Breck Girl” Baby-Hutchison, voted nay.

@SanFranLefty: Nice idea. Nojo, can we have a Rape Senators’ Gallery? Subdomain? Domain that maps to a Stinque.com subdomain, rapesenators.stinque.com with profiles of the scum-sucking bags of shit or links to the ‘contact us’ sections of their Senate web pages?

@FlyingChainSaw: If someone wants to collate all the pieces for me (photos & text), no problem setting up a subdomain.

@FlyingChainSaw: @nojo: Heh, heh, heh heh, Nojo said subdomain.
ChainSaw, I’d much rather work on this collation project than what I have to do tomorrow for my day job, let’s work this out on the side.

The roster of mug shots could be titled “Republican Senators for Rape.”

@SanFranLefty: @lynnlightfoot: Perfect. Lefty, isn’t there some kind of progressive site that rates things like voting records and has a lot of this stuff already. Or psychoconservative spots that praise these neonazis for their Hitlerrific voting records. We should be able to import and give pointers with citations to the contributing sites. Of course, we could provide our usual understated commentary and analysis to interpret the records of these august legislators.

@FlyingChainSaw: Sure, all the groups do their score cards on various issues, i.e. civil liberties, enviro, abortion rights, etc.; I suspect that perhaps a group like National Organization for Women or Human Rights Watch or maybe even the ACLU would count this vote on their scorecards.