Stinque
Home Latest Comments Log in
If it smells, we’re on it.
Stinque
Lovely day for a Perp Walk.
Geek Love 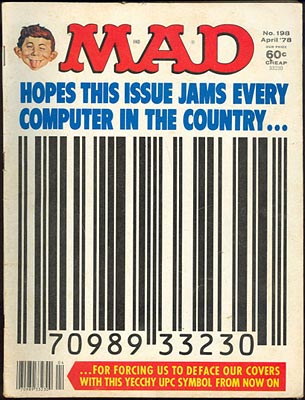 If you want an indication of the sad lives geeks live, look no further than the flurry of chatter every time Google fucks with its logo. Yesterday it was a barcode, honoring the 57th anniversary of the original patent — and the 30th anniversary of its appearance in the UK, to pick a round number.

We’d sooner honor George H.W. Bush’s infamous 1992 encounter with a supermarket scanner, but that’s not until February. So instead we’ll take the opportunity to post one of our favorite Mad covers, from April 1978. In retrospect, 60 cents was cheap — today’s cover price is $5.99.

The rise of the barcode [BBC]

Make your own barcode, just like Google [Christian Science Monitor]

I thought the UPC was the sign of the devil, according to Jack Van Impe.

the only mag from that era that I remember possibly more fondly than mad was National Lampoon mag.
I remember a particularly hilarious one which was a take off on a rather embarrassing childrens book published in 1975 (I just looked and some out of print ones are still available on amazon) called Show Me! a picture book of sex for children and parents.
NLs cover and feature article, done in the same artsy black and white [with midgets yet], was called Blow Me! a picture book of sex for children and people who want to have sex with children.
I think I still have it. somewhere.

@Capt Howdy: Long story, but I mangled the NatLamp dog cover some time back. I also vaguely recall NatLamp doing a Chick-style comic book with Jesus pissing on the disciples in the early ’70s. Definitely a golden age of American humor and satire — everyone’s so chickenshit now.