Stinque
Home Latest Comments Log in
If it smells, we’re on it.
Stinque
Assholes, they do vex us.
Wingnuttery 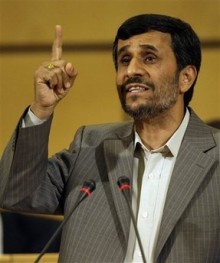 I only regret that he didn’t have to suffer through a Bar Mitzvah like the rest of us:

In a stunning report on Saturday, a British newspaper claimed to have uncovered proof that Iranian President Mahmoud Ahmadinejad — notorious among the international community for denying the holocaust — was actually born a Jew.

According to The Telegraph, a high resolution photograph of Ahmadinejad holding up his Iranian identity card, taken just before the 2008 election, reveals that his family changed its name shortly after he was born, renouncing their Jewish faith and adopting Islam.

“A close-up of the document reveals he was previously known as Sabourjian – a Jewish name meaning cloth weaver,” the UK paper reported.

As you know, if Mom is a Jew when you’re born, it’s a membership card you can’t throw away.

We need photos of his dick, thats the real test.

oh bloggie,
i thought nothing was gonna top my mental picture of the week,
(from the orly show, c/o saw: rod serling grinning as she haunted federal buildings pounding clerks desks and wailing “neegro eez not president!!! you must leezin!!”)

this is rich…almost makes me wish i was in israel for it…almost.

prom, i thought of the dave character too, also my uncle harry.
paging dodgerjew..what say you?!

fun fact: they have “reserved” names over there? IDNKT.

@Promnight: Mooslems are cut as well. The in-laws wanted us to have Jr. go through the whole ceremony sans anesthesia, we said “nope, painfree cap removal for the first born”.

@The Nabisco Quiver are Go!:
well, i’m glad #2 was a girl. what is with this no anesthesia bullshit?
when my daughter recently had a baby boy, i insisted on general anesthesia for myself at the briss.

@baked: It was a moment of grandparently insanity; my brother in law went through it so the in-laws thought “why not the first born grandson?”

The karmic boomerang came back at us when we went with circumcision by a local doc in Japan – where it is not so common – and his work was unfinished. Jr needed a ‘touch up’ when we arrived in different parts and he was already 4; he did not cooperate, until they stuck him in the butt with a tranquilizer.