Stinque
Home Latest Comments Log in
If it smells, we’re on it.
Stinque
Lovely day for a Perp Walk.
Lie Back and Think of England

Driving, Too. And What’s the Deal with Airline Food? 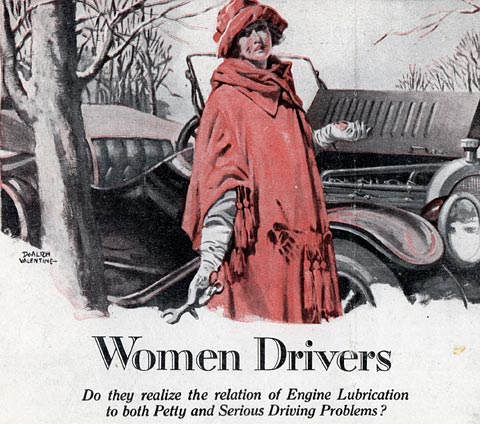 John Derbyshire, one of the boohbahs poohbahs at National Review, has a modest proposal:

COLMES: We’d be a better country if women didn’t vote?

DERBYSHIRE: Probably. Don’t you think so?

Makes sense. We “got along like that for 130 years”, Derb says. We also got along with slavery for almost 90 years, although Derb insists he doesn’t want to peel away that many amendments. But given his logic and the overwhelming Indentured Servant vote for Obama, perhaps he should reconsider:

“What is the case against female suffrage?” Colmes asked. “The conservative case against it is that women lean hard to the left,” Derbyshire responded nonsensically. “They want someone to nurture, they want someone to help raise their kids, and if men aren’t inclined to do it — and in the present days, they’re not much — then they’d like the state to do it for them.”

National Review’s John Derbyshire: Women Should Not Have The Right To Vote [Think Progress]

Not only does Derbyshire like ’em non-votin’, he likes ’em young.

This logic could be useful: since rural voters consistently demonstrate little or no understanding of the issues and vote based on who hates teh gheys and immigrants the most, can we remove their right to vote?

And just for once, could the right find a spokesman who’s not, as they said in Dr. Strangelove, “some kind of deviated prevert”?

What amuses me is that he probably thought he was being bold and irreverent. But Derb’s gonna have to step up his game to compete with the real crazee out there.

I hope his wife smacks him when he comes home after saying ish like that. Surprisingly, he is married and apparently has two kids.

I guess as long as they have World Nut Daily and NewsMaxx they will look moderate no matter what they say.

(check it out I have a face)

please god dont let this turn into a Polanski thread. I cant take any more.

To quote Polanski, “everyone likes to fuck young girls.”

Did he really say that? Yuck.

Since we’re going there, I’m sure there’s room in Manson’s cell.

Howdy, that avatar gives me the screaming hab-dabs. I mean, I know your name is a reference to a Rob Zombie film, but still.

@Tommmcatt is hunkered down in the trenches:
no no
I’m old school. I’m Mercedes McCambridge

sorry about the hab dabs

@Capt Howdy: Your mother’s sucking cocks in hell. Single funniest line in a movie. But I thought you had The Shining in mind. Wasn’t Captain Howdy the name of what could have been a demon who might be haunting the hotel and possibly screwing with the little boy’s mind. If one wants to get blatant about it.

John Derbyshire is the reason that Limeys should never ever be allowed entrance to this country.

Oh, right. I got that all confused with Capt. Spaulding from The Devil’s Rejects.

That was Tony, and I think he was trying to help the kid out. Kind of a personification of his clairvoyance.

@Tommmcatt is hunkered down in the trenches: I really should stop going to the movies to sleep and start looking at what’s on the screen.

Wait. He was clairvoyant? I did not get that.

Dude, that’s what The Shining is. He can see things happening in places even though he isn’t there. Like a clairvoyance with a limited form of precognition.

Oh, wait, you were making a funny, weren’t you?

I really need to include clearer <snark> markings; the characterization of rural America in that post was (obviously) pretty bogus. The point was that it has as much truth (ie, very little) to it as the “all women lean hard to the left”, but that applying that same logic might not lead to a conclusion that Mr. Derbyshire would favor.

Sorry if I offended any rural residents – keep rocking out there in the wilderness! :)

@al2o3cr: I understand. I read through it several times to register snark but with smell of the neighbor cooking up a big batch of meth and the coon hounds all pissy about a she-bitch running loose I was a bit befuddled. Keep up the good commentary.

@Benedick: @Tommmcatt is hunkered down in the trenches:

there was a dreadful Dee Snyder movie called Strangland (7% on Rotten Tomatoes) in which he takes the name.
weirdly I read they are making a sequel