Stinque
Home Latest Comments Log in
If it smells, we’re on it.
Stinque
Assholes, they do vex us.
Obamacare and Cannibal Benefits 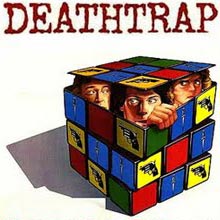 If you get sick America, the Republican health care plan is this: die quickly.

Republicans, of course, are shocked! and outraged!

“Alan Grayson not only refuses to apologize, he is doubling down on his despicable remarks and he is dragging his party with him,” said Ken Spain, a spokesman for the National Republican Congressional Committee, which is targeting Grayson in next year’s midterm election. “This is an individual who has established a pathological pattern of unstable behavior. He is derailing the national debate on healthcare reform and embarrassing his constituents as a result.”

We’d be pissed too, if our opponent stole our best lines.

Sometimes the truth cuts like a scalpel, or, in this case, a chainsaw.

Grayson could use some help. This is not nearly as caustic and provocative as it could be. ‘What’s the Republican health plan? Have a lot of kids and harvest redundant organs like lungs and kidneys, sell them and use the proceeds to buy health insurance!”

He called Republicans “knuckle dragging Neanderthals” tonight – I think I have a new Congressional crush competing with Chet Edwards for my heart.

just when i thought i couldn’t possibly be more contemptuous, amused, and FUCKING pissed off at OUR imbecilic representation…i have to read this NOJO?
we who have a shred of faith cannot salute you.

i’ve definitely decided against a career in moving and storage.

They fail to understand that this phrase is traditionally a military command issued in the face of utter defeat, signalling that the heretofore collective effort (how would a Randian army operate, considering that the fundamental tenet of all military theory is that the individual is nothing, the whole effort is all, and individuals can and must be sacrificed for the greater good) is hopeless, and that the individual soldiers, before the command of “every man for himself” bound to place the collective interest above their own, are now free to simply save themselves as best they can.

“every man for himself” is the last command given in a rout, an utter defeat. When all is broken down, no hope for anything better exists but to let each look out for themself.

No kidding, it is a military expression allowing soldiers to abandon orders and try to save themselves.

@baked: Yes, but screaming “You Lie” at the President on the floor of the House in a historic breach of 230-odd years of Congressional decorum is just free speech at work. And my Congressional boyfriend is pathological for pointing out the simple fact that 18,000 44,000 people die every year because they don’t have health insurance? That’s 50 120 people a day, roughly. One Three every thirty minutes. In the time it takes you to watch a syndicated rerun of Friends or boyfriend Jon Stewart, another three more people died because they didn’t have health insurance.

For fuck’s sake, we should all stick that in our pipes and smoke it.

ADD: I love that his apology today was to all the dead people who died because they didn’t have health insurance. /be still my beating heart! ADD2: Wow, he was kind of hit by the ugly stick. But I still like what he’s saying.

He is derailing the national debate on healthcare reform and embarrassing his constituents as a result.

Fine words from the party of “grandma’s going to die under one of Obama’s death panels.”

@SanFranLefty: Handsome is as handsome calls-the-GOP-on-their-BS.

So back to this morning’s thread on the California governor’s race, Mr. SFL directed me to Governor Moonbeam’s official portrait from 1975-83 and I think based solely upon the Ralph Steadman/Hunter S. Thompson characteristics of it, I must vote for him.

that was my favorite part, “a pathological pattern of unstable behavior”

another new fave line spoken by my boyfriend jon this week while interviewing ron paul about health care….
jon: “this book makes a lot of of sense, and you call yourself a congressman?”

ADD: i’ve been stuffing that in my pipe since Kankles Kare was on the table. the rest of the world is shocked, SHOCKED! about american health care (lack thereof)

one more thing…
let me remind you veterans and nubies that i went to the trouble of becoming a CITIZEN of ANOTHER COUNTRY that has socialized medicine, as an american i’m literally uninsurable.

@SanFranLefty: That is freaking awesome. I haven’t had time to catch up on any new that isn’t contained in the daily free fishwraps handed out by the Metro here in ONC.

@The Nabisco Quiver are Go!: Try on this quote from Grayson for size, and prepare to welcome our new fire-breathing overlord:

“Rush Limbaugh is a has-been hypocrite loser, who craves attention. His right-wing lunacy sounds like Mikhail Gorbachev, extolling the virtues of communism. Limbaugh actually was more lucid when he was a drug addict. If America ever did 1% of what he wanted us to do, then we’d all need pain killers.”

When asked to apologize to Limbaugh, he said:
“I’m sorry Limbaugh called for harsh sentences for drug addicts while he was a drug addict. I’m also sorry that he’s bent on seeing America fail. And I’m sorry that Limbaugh is one sorry excuse for a human being.”

Holy fucking shit, I am in love now, Oh, I resisted at first, but jesus christ on a bycycle, this is FCS, the Chainsaw, except in Congress.

@SanFranLefty: This is a slander on the Neandertals, who probably cared for each other when they got sick.

@Dodgerblue: Good point. Maybe we could get the Geico cave men to do a commercial in support of universal healthcare: “So obviously right that even cave men did it.”

@Dodgerblue: Thank you for using the correct spelling. I will always love you for that. As well as the.. you know… other things.

@Dodgerblue: That wasn’t all they did, if you believe Clan of the Cave Bear.

@Prommie: Maybe he is FCS.

@SanFranLefty: RudePundit says that all Grayson did was “point out that motherfuckers fuck their mothers.”

He was a big-ole hairy mean-ass lawyer, this Grayson, who specialized in going after public contract fraud. Apparently a complete fuck you wildman, who has fuck-you money. Would wear pink cowboy boots to court, stands six foot four. I hear tell he once wrassled a bear.

@SanFranLefty: Ah yes, every middle American women’s smut book of choice in the 80s. I think my mom would be horrified to learn that it was when I “borrowed” this book from her shelf that the concept of oral sex was illuminated for me.

alan, i think i love you.

@flippin eck: I did not know that! When I was a lad I had to go to the “literature” section of Waldenbooks, and find that “Memoirs of a Victorian Man of Pleasure,” or whatever it was called, by “anonymous.” Boy oh boy, that Victorian kink was extreme, really, there’s stuff in that there book that you can’t even get on the internets.

Do they show Darryl Hannah doing it in the movie version? I’d dig that.

@Prommie: Cue up Lou Reed, “Sex With Your Parents”: http://www.youtube.com/watch?v=7f7hxM05voQ