Drowning in Our Tears 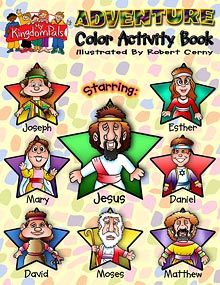 After resigning as governor in late July, Palin spent most of August in San Diego working with [Lynn] Vincent on the book, “Going Rogue: An American Life.” Rumors swirled about Palin sightings at Vincent’s condo complex in north San Diego County. Palin reportedly was joined here by her family and top aide, Meghan Stapleton.

Fuck. We would have been happy to have coffee with Palin while she was in town, maybe even write a Facebook column for her. But no, she never called. Bitch.

How great is that that coloring book with the picture of Matthew the, all together now, TAX COLLECTOR. Isn’t irony great?

You learn something every day: Jesus here looks like He’s boxing out. Odd — I always figured He was the starting point guard for the Apostles.

@Dave H: Matthew kind of looks like the stereotypical sleeping Mexican named Juan cartoon dude, or is that just me?

Speaking of H-A-W-T, here’s the pin-up calendar of girls you love to hate.

Hate to break up the love-fest :) – but check this out.

Anybody want to start a pool on how long before Mr. Perry gets v&?

Somebody should remind him that the last group that tried this *were* the facists, not the other way around.

Buncha Jews on the cover. The stars need another point on them.

@chicago bureau: I don’t think so. Guy doesn’t get on the team until he’s in his 30s, he’s gonna come off the bench.

@Dodgerblue:
excellent “point” my fellow landsman.
have i mentioned how happy i am to be out of israel?
i’m looking into buddhism now.

@baked: I used to study at the Zen Center of L.A. Most of the students there were Jewish.

I think I have figured out why there are so many fucking retards in Amurrica, why we have this fucking degenerate, primitive culture of Stoopid which is getting larger and gaining more and more power, this anti-intellectual, primitive, theocratic, violent, superstitious culture of dumbness.

Its because of this namby pamby self-esteem thing with the kids, you know, everyone wins, A for effort, self-esteem is all, nothing must make anyone feel bad.

You see, it has always been true that there are a lot of idiots in the world. But back in the day, it was ok to tell them they were idiots. And then, as now, idiots didn’t understand a lot of what they see in the world around them. but back in the day, when it was OK to tell an idiot that they were an idiot, idiots were taught, “you might not understand science (or history, or philosophy, or theology), but thats because you are an idiot, not because science is wrong.”

But nowadays, all of our idiots have had their self-esteem carefully nurtured, and now we have a generation of morons with amazingly high self-esteem. And when they encounter something they don’t understand, they don’t say to themselves “I don’t understand, but that must be because I am an idiot, so I am gonna trust that smart person who says this global warming is happening.” Instead, full of self-esteem, if not downright narcissim, they say to themselves “I don’t get it, therefore, it must be bullshit.”

You can actually trace the rise of this approach to ignorance (the assumption that if it confuses the ignorant, it must in fact be bad and evil) in the transformation of the predominant style of joke in the skits on Saturday Night Live. In the first years, the most common joke was a “knowing” joke, an “in joke,” which required special knowledge to be appreciated. There was humor in the hidden statements communicated by what was ostensible nonsense, or inexplicable. Landshark, Samurai Deli Clerk, funny stuff. Intellectual humor, hello Mr. Steve Martin, you wild and crazy guy.

@Prommie:
In 2004, Scientific America published an article on the correlation between high self esteem and criminals. The psychologists of the 60s got it all wrong. The problem with criminals wasn’t having too little self esteem, but rather having way way way too much of it.

I’ve seen it with ex-friends of mine who let their egos develop to the point where they can’t deal with the reality of who they are. One of them is now on serious meds (prescription meth) to combat the emotional issues caused by his denial.

anyone aware of the studies indicating extremely high I*’s makes you mentally ill? call me for the data…got a big file.

@baked:
I’ve read somewhere, but not sure where. I’ve witnessed a couple of former ultra intelligent classmates of mine go nuts.

@Prommie: Nothing new — I felt the winds shift when I was in college, in the late ’70s. One day it’s post-Vietnam, post-Watergate ennui, the next day it’s toga parties. My most popular column for the campus rag was about the Rise of Airheads.

It suddenly hit me, vis a vis Talibunny the snowbilly grifter, “when the going gets crazy, the crazy turn pro.”

hey kids!
remember “crazy meds friday?” it went the way of after dark, and photo jams. and where the hell is JNOV???
so what are we all taking these days?