For The Love Of God: NO 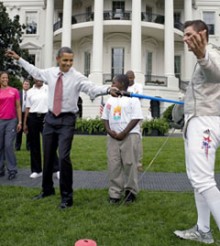 Let’s get this straight.  I am in the tank for Sport.  Season ticket holder to the Blackhawks, constant attendee at Wrigley (and in the minority of fans who actually watch the damn game), etc.  Further, I really dig the Olympics; notwithstanding American teevee’s obsession with gymnastics, beach volleyball, and figure skating for no legitimate reason, I am a devoted viewer.  But: actually having the Olympics handed to us on Friday afternoon?  Do me a favor.

Two: we got other problems.  Last week, a kid on the South Side got beat up by a bunch of other guys, right in the street.  Reportedly, he was just an innocent bystander.  The fatal blow apparently came from a railroad tie.  Novel.  Usually, it’s a second-hand gun.

Look: one or two kids a week are getting shot.  There are square miles that are totally blighted out.  The CTA is perpetually within a few months of meltdown, or catastrophic failure, or both.  And so on.  Having the Olympics over will paper over these festering problems, and many others, while spending desperately needed money on… a real estate development.

COME ON, RIO.  BAIL US OUT.  PLEASE AND THANK YOU.

For the record: here’s the video of Derrion Albert’s last moments. As disturbing as it sounds. And the sounds are worse.

A few months ago, a woman dying on the streets in Tehran shocked the world. Here? Just another day.

ManchuCandidate: Oh, irony: Hannity’s probably going to say something about a boiling pot and dancing Kenyans sometime in the next few months. You watch.

Here’s the other thing — this deal has had the whiff of Good Old Chicago from the jump. Connected developers and whatnot. If Richard M. Daley, Mayor, pulls this off? The undefeated, undisputed heavyweight champion bullshitter of the world.

@chicago bureau:
That’s what helped push the Vancouver bid. The Chair of the bid was the main partner for Whistler Mountain.

@chicago bureau: I’m holding out hope that the network wags and wigs will see the bigger dollars backing up gratuitous shots of Rio derriere, rather than another montage of Bessy, the Great Fire and a couple of Sandburg quotes.

Noj’, can you ready a clip from the famous ‘Fora Bush’ protester that graced the W some years ago? She was quite athletic looking, as I recall.

@chicago bureau: That is fucking horrifying.

The Nabisco Quiver are Go!: Bob Costas will be contractually obligated to say “make no small plans” twice per primetime broadcast.

Yep — if this comes down, you’re going to get the cartoon version of Chicago. Cops with moustaches, the Superfans, Chicago hot dogs, gangsters. The whole smash.

I grow fearful of the Opening Ceremony. The Great Chicago Fire, presented through interpretive dance, might just be enough to push me over the edge into total madness.

Ya know what would be neat, if they would hold the olympics, at least all the ancient traditional events, in a well preserved ancient greek site, where it was held in antiquity, and keep it low tech, do it in that tradition.

Of course, the athletes would have to be naked, which is a plus plus.

@chicago bureau: Your comment made me think, is there any such thing as a developer who is not connected?

Promnight: Zoning is our frenemy. As long as there is zoning, there will be ways to bargain around it. Repeat customers will get power.

Just like anything else, really — except with much more money than plenty of other endeavors.

TJ: shitmydadsays, http://twitter.com/shitmydadsays Has anyone been reading it? Dude twitters the remarks his crusty, crude, elderly father says to him. If they are real, the dude’s father is a national treasure, if they are fake, he is a national treasure. Here is a good one: “Sometimes life leaves a hundred dollar bill on your dresser, and you don’t realize until later that it’s because it fucked you.”

I have spent the last 3 weeks fighting against an effort by another trade association to basically outlaw their competition, their much cheaper and more convennient competition, who were eating into their market share. My people are consumers of the service, and so, I am fighting on the side of right, here.

@Promnight:
A friend of mine who visited me has busted my chops about the urban sprawl of Toronto. Problem is that most of it was caused by members of the party he tells me I should vote for (Conservatives which ruled Ontario for almost 40 straight years and who dominated local politics for so long.)

… notwithstanding American teevee’s obsession with gymnastics, beach volleyball, and figure skating for no legitimate reason.

I have one word: Spandex.

God damn. At the Stanford Post Office, I was in line (a long one, naturally) behind Kerri Strug. It was disturbing. Her head topped out just a few inches above my belly button. She is the first, last and only person I have ever met for whom the phrase “trust ’em as far as I can throw ’em” actually caused a pause for thought.

As for beach volleyball? The most infuriating part of Beijing coverage. News flash — Misty May has bewbies! Stay tuned for more! (Bewbies.)

@chicago bureau: I can’t even talk about that video, it’s so fucking horrifying. W/r/t your story at the post office on the Farm (I think I can predict which mouth-breathing glaciers were your cashiers as I suspect JNOV and I were in line behind you raising hell) I remind you that there’s always rhythmic gymnastics to make regular gymnastics look respectable. And stop-yer-bitchin’, didn’t you get to see all those hotties from the swim team run through the quad in their Speedos? Aiii iiii iii!

@chicago bureau: Oh fer Crissake! I blame all the obnoxious trustafarian parents who can’t stick their kids with needles for basic innoculations.

@SanFranLefty: $25 at Walgreens, including a free pass to FEMA camps.

nojo: Not for nothing, but I got a floo shot a week ago Saturday. And then I came down with a cold the very next day. If anything qualifies as “dumb fucking luck,” that’s it.

Advisory handout said that fever/cough were common, mild side-effects of the shot. But it didn’t go away. Yet I kept going to work thinking I was totes non-viral. Five days of coughing later, I still had a fever and was coughing up blood. Totally got faked out.

That was a quality moment with my MD who I hadn’t seen in three years. Was called stupid. Twice.

@chicago bureau: My mother in law and I both got the Walgreen’s flu shot. Now we’re both catching colds or something.

redmanlaw: Excuse me. Where was the fucking spotter? Dumbass.

ADD: Stinque Top Tip — if you’re going to get a floo shot, DO NOT CATCH A GOD DAMNED COLD THE NEXT DAY. Saves you a lot a time and trouble.

Ugh. I can’t even imagine how tired you (youse?) Chicagoans must be about that. Last month, I spent maybe 3 hours total on layovers at O’Hare looking at those omnipresent “candidate city” posters, listening to Shawn Johnson’s squeaky voice pitching potential to hundreds of people who could give a shit. By the time I got onto the return flight home, I was rooting for Munich (or whoever else is running).

@Promnight: My favorite (so far):

Do these announcers ever shut the fuck up? Don’t ever say stuff just because you think you should. That’s the definition of an asshole.

It’s also the definition of a lawyer.

Several months ago I guessed Chicago was the top contender, I now would say Rio is the one. Since the US candidates don’t get financial backing from the fed like all the other countries, sponsorship is the only avenue for generating funds. The last US Olympics in Atlanta in 96 was criticized for it’s whoring commercialism. So unless there is other backing any US candidate will always be suspect of crass commercialism to have an Olympics and the Chicago bid doesn’t look any different from my perspective.

@chicago bureau: Real men don’t use spotters. Even I know that.

@AARPrick: See, even for all of that commercialism, I have fond memories of actually being there in Atlanta in 1996, other than the whole park bombing thing. Praps it was my youth.

Atlanta, however, did have problems not only with commercialism, but also with transportation (which is no surprise). MARTA was not used to handling that many people who actually wanted to use public transit (as opposed to the Poors who were forced to use it and suburbanites who avoided it to keep from catching teh Poor and teh Black); events were held too far afield; etc. etc.

(An interesting sidebar to the MARTA adventures was that when they shut the whole rail system down for cleaning and repair after the games were over, they found several prosthetic limbs that were apparently just lying around on the trains.)

It was seen as the event that really kicked off development intown, and the rise of suburbanite youngsters and people with money coming back into the city — not to mention new high-rise condos that priced teh Gheyz out of Midtown.

I am still glad, though, that we at least got Centennial Olympic Park (where you can still see where bomb shrapnel that hit a statue). I enjoy it on my lunch breaks every day.

@rptrcub: I personally think the US does a better job hosting Olympics than most other host countries (exception would have been Sydney). I think the commercialism is a handicap, but we tend to repurpose and utilize what we have for venues rather than gigantic construction projects of some other countries. Peter Ueberroth has been credited as a pioneer of this in the ’84 LA Olympics.

Tell me about it. Still, its usually only when they are showing off in public, in private convo with each other, we tend to be terse.

@chicago bureau: I was waiting for a post about this from you! Did you see this site? It is teh awesome.