Stinque
Home Latest Comments Log in
If it smells, we’re on it.
Stinque
Cassandra was right.
DOTD 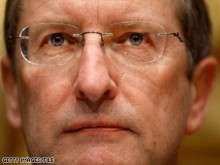 Sen. Kent Conrad (D-N.D.), the Senate Budget Committee chairman and a member of the unsuccessful Gang of Six effort, raised a few eyebrows this week with a message for his “progressive friends.”

Conrad, a consistent opponent of the public option, wanted liberals to know “government-run programs” aren’t necessary to lower costs and expand access. He explained that he’d finished reading T.R. Reid’s “The Healing of America” over the weekend, and learned Germany, Japan, Switzerland, France, and Belgium are doing just fine. “[A]ll of them contain costs, have universal coverage, have very high quality care and yet are not government-run systems,” Conrad said.

It was an odd thing to say, and reflects some important confusion about these international systems. As Ezra Klein explained, “In France, for instance, the government provides all basic insurance coverage directly. In Germany, insurers aren’t permitted to make a profit. In Japan, health insurance is publicly provided, and private insurance is available only to ease co-payments or cover services that the government leaves out.”

I am sick of these fucking Senate douchebag DINOs. North Dakota – land of complete fucking idiots.

People. I think I may have broken this impasse. I didn’t want to say anything earlier and get your hopes up but I had a very good phone meeting with one of the senator’s top aides who happened to ba answering the phones at his DC office today. I explained to Cheryl all about how we need the public option and that the senator needs to get on board. She listened very attentively and I think I can safely say that I opened her eyes. Naturally she couldn’t come right out and say that but I could tell by her tone that she’d come around. I think it safe to say that in a day or two you’ll all be hearing how the senator takes it all back and that he’s now all for a single-payer system but will settle for a public option.

Since we’re stuck with the filibuster, let’s reconsider breaking up California into five states. We’ll lose the valley to wingnuts, but we’ll still have a net gain in mildly center-left Senators.

And then there’s the senator who wants to give insurance lobbyists extra time to review the legislation. Literally. Money well spent, I say.

Oh, and back to Charity Cantor: I thought one of the reasons for the urgency was that “free” emergency-room visits are not only much more costly than preventive care, those costs are taken out the hide of the insured. There’s more to this game than just universal coverage.

Damn. Forgot to hold my breath.

@blogenfreude: Either that or had New York, DC, Phillie, etc, bombed to bits by the Germans.

I swear, they talk like it’s opposite day. Like they purposely choose the dumbest lies out of pure contempt for the people, just to see how far they can push it.

@RomeGirl: They’re just biding their time until a psychopath takes out Obama, Biden and Pelosi and the Adkisson Brigades seize Washington.

You silver-tongued devil, you. I bet you sound just like Hugh Grant when you want to.

@Tommmcatt is hunkered down in the trenches: Actually, I sound like Michael York. Except humpier and butcher. I know this because I did a voice for a Victoria’s Secret ad when they couldn’t afford Mickey. I had to say “What do women really want?” like I had the worst case of blue balls evah. It took hours because I kept laughing in the middle of takes.

@Tommmcatt is hunkered down in the trenches: I can attest that Benedick has a beautiful voice and an accent to make Anglophiles swoon.
@Benedick says Keep on Fucking that Chicken: It could have been worse I suppose … Lifetime movie?

Reading comprehension: Ur doin’ it wrong.

@Benedick says Keep on Fucking that Chicken: Does Michael York have blue balls? I remember him, liking him, in what, I have no recollection, several things from the 70s. Now I have to go to IMDB, good for several minutes of mindless fun, until I start seeing those pictures of people, like Michael York, whom I last saw when they were young, and I will start thinking my life is over again.

@SanFranLefty: I was struck more by Benedick’s content, than sound, I so envied that he seemed to always say just the right thing in just the right way.

I, on the other hand, could write a book called “How to Alienate Freinds and Piss off Everyone Else.”

“To lose is to win, and he who wins shall lose,” or something.

@Original Andrew: “No matter where you go, there you are.”

@Promnight: He’s a very nice man and a good actor. He was a beauty when young, in a broken-nosed boxer kind of way, and was going to be the next Olivier. Then he did movies Romeo and Juliet, Cabaret, ringing any bells? I saw him at the National in several plays when he was their resident juvenile.

I think he lives in Hollywood.

@SanFranLefty: Voiceover acting is the pits and pays like crazy, unless you do it for fee and they use it abroad. That’s the only kind I’ve ever done. A Lifetime movie would pay better.

@Promnight: As for saying the right thing: You need to get out on more auditions.

Yes! Romeo and Juliet, the version by Zeffirelli, was it? They showed that to us in grade school, he was Tybalt, was he not? And I have not gone to IMDB yet. He made that much of an impression, when I was, what, 11 I think.

And in Cabaret, I remember scenes between him and Liza, had no idea what was going on, some discussion about whether you could catch syphillis from a towel.

@Promnight: He was indeed. And when Zeffirelli did Much Ado at the National with the most amazing cast ever, he was Claudio.

@Benedick says Keep on Fucking that Chicken: I always loved Michael York, and liked him even more when I found out he is a serious collector of antiquarian books. He usually attends the California Book Fair when it’s in LA.

@Benedick says Keep on Fucking that Chicken: I’ve always been a fan of York’s, but I did see him in an absolutely awful production of Camelot a couple of years ago. Of course, the musical itself is partly to blame for the trainwreck I saw. He’d totter out, sing a song, and then totter back off.

According to the stage manager, he’s a lovely man. However, his wife is crazier than a shithouse rat.