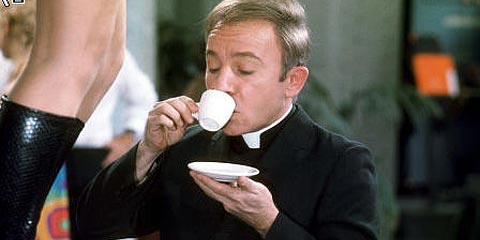 Laugh-In had to be one of the weirdest shows I’ve ever seen syndicated because I didn’t understand most of the jokes (I was 14 at the time) and it was totally dated (Sock it to me?) but it was my (albeit pathetic) link to the 60s (I hadn’t discovered the music yet.) Because I didn’t have a clue, it inadvertently helped broaden my interest in history outside the military history I read as a kid.

@ManchuCandidate: The original run of Laugh-In rocked my 7-year-old world — the first time I laughed so hard, snot flew out my nose.

I later caught some edited half-hour reruns in the ’80s, and alas, it didn’t age well. Didn’t matter — the damage had already been done. And here I am today.

@nojo:
I’m sure that when a kid (of mine?) watches 20 year eps of the Daily Show, she/he will turn to me and go “WTF? You thought this Jon Stewart guy was funny?”

My indoctrination to subversive humor was MAD Magazine, and Playboy. I’m serious! It wasn’t always about the pretty airbrushed boobies, I did also read the articles…

@ManchuCandidate: Mad soon followed Laugh-In for me, and all the kids knew where to find Little Annie Fanny in our parents’ bedrooms…

Tried to find some video of him as the Neonazi in Blues Bros. – could not find. I’ll say it again – Henry’s dead, yet Dick Cheney still walks the earth.

blogenfreude: Notwithstanding my sadness, I still hate Illinois Nazis.

@SanFranLefty: Bloggie will have her in a bit. We’re tag-teaming the Stinque Morgue tonight.

@nojo: I knew where the playboys that contained little annie fannie were. They could be found in dad’s sock drawer. They could also be found in the woods, wet, moldy playboys, hidden away in the various “forts” in the woods. Once when I was 12, a neighbor girl, she was a high school freshman, so musta been 14 or 15, showed me a hardcore magazine with a close up pic of actual insertion, but I honestly had no idea what it was. She was sitting on her bed, and kept saying “I’m so horny.” I think that if I were precocious, I would have had the opportunity to be very precocious. Oh well.

It seems the Teabaggers stole their rhetoric from the Blues Brothers:
Head Nazi: White men! White women! The flag is calling you. The sacred and ancient symbol of your race, since the beginning of time. The Jew is using The Black as muscle against you. And you are left there helpless. Well, what are you going to do about it, Whitey? Just sit there? Of course not! You are going to join with us. The members of the American, National Socialist, White Peoples’ Party. An organization of decent, law abiding white folk. Just like you!

And the inadvertent hilarity of Cocktober:
Gruppenfuehrer: [to Head Nazi, as they plummet off the bridge] I’ve always loved you.

@Promnight:
Hey, those moldy Playboys were the greatest treasure a boy could find in the woods at that age.

@Promnight: My buddy Jay’s dad had subscriptions to Playboy, Penthouse, and later, Hustler. He kept them in a huge messy pile in his closet, so we could remove them easily, without detection. Those magazines and the Farrah Fawcett poster got us through puberty.

Hey you guys, I am lost here lately, what the fuck, is all I keep thinking.

20% or so of our population is batshit insane, and dumb and ignorant too. Thats not news.

That 20% now has a major media outlet that validates and broadcasts batshit insanity and idiocy and ignorance and hate. Thats new.

The rest of the media has been pushed by the Murdoch media to also give credence to batshit insanity and idiocy. Thats completely new.

Batshit insanity seems to have a force and power to it that cool, calm rational analysis lacks, or, as a fellow Irishman said, the best lack conviction, while the worst are filled with a terrible intensity. Forgive any memory lapses, but I guess that means that this is not new.

Those with economic power have enormous, and illegitimate, control and power in our political system. Thats not new.

Many of those with economic power are either batshit insane and stupid themselves, or have decided to cater to the batshit insane for their own political purposes. I think thats kinda new. the powerful used to be, I think, a little more elitist, now they have no qualms about catering to the LCD.

As a result of rampant stupidity, insanity, and corruption, and also cultural anti-intellectual fundamentalist religious elements in our society, the power centers seem to be in the control of people more stupid and insane than would have been allowed to happen by older, now declining, cultural factors that used to impose some elements of noblesse oblige on the rich.

I other words, I feel more alienated from my own society, in deep, fundamental ways, than I ever have, and I have never felt particularly comfortable in this society.

Things that I believe are fundamental truths and moral values, and things that I was actually taught by the government education system to be fundamental truths and moral values, are now considered outrageous, communist, fascist beliefs. Things like, the wealthy have a moral obligation to take care of the poor. That our society has acheived great freedom because our government is blind to religion and does not get involved in legislating religious tenets. That government itself, and its institutions, particularly the courts, are the highest achievements of humankind, in that they have created a system in which people live in a civil society, where violence is forbidden, where disputes and differences are settled in courts which have the respect of all, which allows their edicts to have the moral force to settle disputes and prevent violence and faction and strife.

It all seems lost. Something close to half the population believes that government itself is evil and bad per se. That all taxes are slavery, as opposed to being the fair requirement imposed on us to pay for the benefits that our government provides. A substantial portion of our population seems to believe in might makes right, an eye for an eye, I got mine and the devil take the hindmost.

Their is a movement of social ludditism that fails to recognize that the benefits of government do in fact ooutweigh the detriments, and who, quite frankly, are savages, who believe in a savage and uncivilized vision of human society.

This is the decline and fall of a civilization we are living through.

Any good middle-aged discounted ships available to serve as the S.S.S. Molly Ivins?

@Promnight:
Find someplace where the stupids can’t get you. The knowledge saved from the fall of the Roman Empire was stored in monasteries.

@Promnight: It wasn’t Murdoch who said, “You furnish the pictures and I’ll furnish the war.”

@ManchuCandidate: I just recently made contact with my best friend from freshman year of college, Big Al, we called him, larger than life in many ways, 6 foot four and 300 pounds, a radical liberal, our dorm rep to the university student government. My dude soul mate, and the one person from my past I most wanted to get back in touch with, he found me on facebook.

He is now a native hawaiian priest in the old traditional religion, studying under, he says, an old traditional hawaiian religious figure, and you know, I was not at all suprised to hear this.

He has also been a bucket shop commodities trader, a social worker, and he also works in IT, website development.

Nothing surprises me about Al.

@SanFranLefty: I constantly monitor the used ship market and would bore you to death if I posted every prospect I saw.

For a million, we could definitely, easily, find a boat that 10 families could live on. Thats a given.

@Promnight: That is awesome. Next time I get to Hawaii will you hook me up with him so we can go eat spam and macaroni in north Honolulu?

ADD: We have more than 10 families, and we need our fucking space. There’s at least 25 families here, and some of us need space from our S.O.s and one another. Look for ones that can take at least 100 passengers.

I suppose today’s version is “Every kid knows the password to Dad’s Secret Folder.”

@nojo: Oooh, we could be pirates! I look great in puffy shirts.

@blogenfreude: Read aloud your comment re DICK still walking the earth. To which Mr. Lightfoot retorted, “stalks, stalks the earth.”

@lynnlightfoot: I was on the verge of renaming the obit category “And Cheney Stalks the Earth”, but I like the one we have.

@SanFranLefty: I’m headed for the hills, thank you very much.