Stinque
Home Latest Comments Log in
If it smells, we’re on it.
Stinque
Mastodon: @stinque@mas.to
Tell Stinque About Your Mother

Black Eagle On The Couch 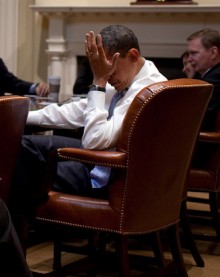 You remember November 4 of last year, right?  While you were polishing up your Grant Park speech, what was running through your mind?  Was your main thought, “hey, now I get to do everything I dreamed of as a little boy — but only if the Republicans think it’s OK?”

Come on, young man.  The leadership of the GOP, and opponents who were bringing a serious level of crazy, were publicly calling you every name in the book (save one).  They were accusing you of being a terrorist-loving, anti-American Marxist, bent on destroying the United States.  And how did the people respond?  Dude — you won in North Carolina.  Jesse Helms’s old stomping grounds was won by you.  And Indiana.  For Christ’s sake — you won a beet-red state like Indiana.  Gore and Kerry won Wisconsin by a few thousand votes.  You took it by 14 points.  (Trust me — I was there.)  You even nabbed an electoral vote in (excuse me) Nebraska.

And now you’re staking your presidency on a cave-in to Olympia Snowe?  Shoot — I like her, too.  But I don’t like her enough to turn a grand health care plan into a watered down fiasco… which (wait for it) the GOP will still take a dump on.

Enough.  You got an hour on Wednesday.  Prepare to sack up.  Show ’em who’s the boss.  (If memory serves, it’s not Tony Danza.  It would be you.)

Public option or bust — now, or never.  Those who are in the tank for you will have your back.  Trust.

If we don’t support him now, we won’t get another moderate Justice to replace a liberal.

Darling, this sounds like a Village People record. Nothing wrong with that except… they were the VP and he is BHO.

What you said. And may the Cubbies rise again.