Stinque
Home Latest Comments Log in
If it smells, we’re on it.
Stinque
Assholes, they do vex us.
The Bush Legacy 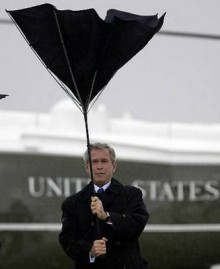 Upset that Obama hasn’t sent Cheney and his torture crew to The Hague?  Angry because we might not get a public option?  Calm yourselves, gentle snowflakes – things could be a lot worse:

Maybe you heard: George W. Bush stopped by Mustangs football practice this morning, where he told the team to “win one for Yom Kippur.”

This can’t be real, can it?

Ya’ll do remember that the only trip W ever took out of North America, before becoming president, was a trip to Israel, when he was governor. As he boarded the plane, a reporter asked if he has a message for the Israelis. He responded “Yeah, I am gonna tell them they are all going to hell.”

This also reminds me of the time he was presented by Corretta Scott King with a portrait of MLK, and his response was “Thank you, I can’t wait to hang it.” For that alone he deserves to die by nutkicking. To simply be kicked in the nuts, over and over, thousands of times, until the flesh turns to hamburger and the kickers’ feet start going right through his abdomen and out his asshole. he should be kept on life support, the bleeding controlled, so he can enjoy this longer.

@Prommie: The hang it comment. Really? Sure this is not Intertubes folklore? Seems incredible, even for Caligutard.

@HillRat: That’s why I want video. Part of me says that even the “put food on your family” president can’t be that inept.

@blogenfreude: He’s not inept, he is evil, a vicious, nasty, fuckwad. I saw it the day it happened, he smirked, too. Snide little fucking shit, made me, for the millionth time, want to wipe that fucking smirk off his face.

@Prommie: I don’t know how anyone couldn’t have said he was a sociopath after seeing the clip of him mocking Karla Faye Tucker and taking such glee in her soon-to-occur execution.

Only a truly vile shitbag would joke about Lynching Martin Luther King. Only a genuine sociopath would make this joke to the face of King’s daughter. But now we add the facts that he did it on MLK day, that he did it during an official observance of MLK day as part of his formal, televised remarks.

There are no words, no concepts, nothing can convey the utter depravity, the extremes of hateful viciousness and complete narcissism.

W may well be the worst person in the universe.

@SanFranLefty: I truly believe he is a monster. I am absolutely convinced that the reason he kept making those surprise visits to Iraq was so he could be personally present, and perhaps even take part in, the torture and humiliation of Saddam Hussein. I do truly believe that when he would watch the video of the torture of Al Quaeda prisoners taking place, his dick got hard and he leaked pre-cum into his drawers. At least.

TJ/ I Fight the DJ: FaceBook Is Full of Drama, If You Allow It

Can this be Comment of the Decade? Catharsis, now!

This also reminds me of the time he was presented by Corretta Scott King with a portrait of MLK, and his response was “Thank you, I can’t wait to hang it.” For that alone he deserves to die by nutkicking. To simply be kicked in the nuts, over and over, thousands of times, until the flesh turns to hamburger and the kickers’ feet start going right through his abdomen and out his asshole. he should be kept on life support, the bleeding controlled, so he can enjoy this longer.

While Dubya was our omnipotent guvner he was confronted with commuting the life of Death Row Inmate Karla Faye Tucker. Tucker was convicted of the horrific crime of pick-axing a woman to death while high on meth. (She said she had multiple orgasms while in the act of the crime.) Karla Faye Tucker was of course convicted and sentence to die by lethal injection. While in prison for nearly 14 years, Karla was a model prisoner, became born again,ministered to other convicts and had been generally regarded by prison officials to be reformed. She had many supporters for commutation of her sentence to life, including Pope Jean Paul II, Newt Gingrich, Pat Robertson and the brother of the murdered woman. Bush reputedly said when asked if he would commute her sentence and spare her life :

“I know all the facts say she is rehabilitated, but in my heart I just can’t help feeling that she is not.”

@texrednface: And we all know Shrub’s acumen as a judge of character:

“I looked the man in the eye. I found him to be very straightforward and trustworthy, and we had a very good dialogue. I was able to get a sense of his soul.”

One tyrant to another, I guess.

@texrednface: And when Tucker Carlson interviewed him, he managed to shock Uber-Asshole Tucker Carlson with his nasty inappropriateness, by mocking Tucker’s plea for life, imitating her, when Tucker asked him “what did she say to you,” he whined “please don’t kill me.”

I realize now, that it was the pleas of all these important people that doomed Karla Faye Tucker. When the Pope and Pat Robertson and Newt, and most probably, his parents, tell W that he ought to do something, you just know thats when he has something to show them about how he’s the decider, and he ain’t taking no shit.

Seriously, we all know people like this, resentful, angry, narcissistic, insecure, shitheads. He probably would have commuted Tucker’s sentence if it were played right. But once he had the chance to say “fuck you” to THE POPE by refusing his request, she was a goner.

@Prommie:
Yeah, I knew one. I called him CEO.

@Prommie:
If one could count the number of people G.W. Bush has killed by proxy…
His wife on the other hand offed one by herself.

@texrednface: And there you have it. Bush didn’t want to avenge/outdo his Daddy, he wanted to one up Chemical Laura!

@texrednface: Not to mention she was the go-to-gal in Houston in the ’70s for society gals and debutantes to score some Colombian nose candy, or so I’ve heard from sources who were there at the time.

But in happy news from the Lone Star State, the Little League team from a league that was a nearby rival to my childhood softball team’s league is in the national finals of the World Series of Little League.