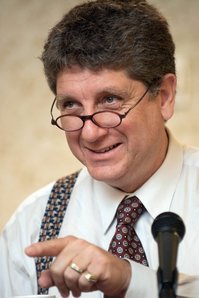 The Moran town hall was the last stop on a 10-city tour for Randall Terry, the anti-abortion activist known for his extreme tactics.

Terry’s colleagues put on a skit with a man in an Obama mask pretending to whip a bloodied woman, who kept saying, “Massa, don’t hit me no more. I got the money to kill the babies.”

Terry himself dressed in a doctor’s lab coat and pretended to stab a woman in a gray wig.

“There’s no way to pay for this thing without killing granny,” Terry explained.

There’s really nothing I can add to that.

While guns have been carried legally inside and outside some recent town halls around the country, guns were banned at Moran’s event because it was on school property.

Why didn’t anyone else think of that?

TJ: On the heels of Teddy, Dominick Dunne died. Who’s the third one going to be? J.D. Salinger?

To FCS and anyone else who wants to see Morning Glory Clouds Over Australia:
http://antwrp.gsfc.nasa.gov/apod/ap090824.html

[I was hurrying to meet a deadline this morning, or I’d have supplied this URL then.]

Andrew Breitbart is a steaming pile of class as usual.

@lynnlightfoot: What an a amazing picture. I put the site on my bookmark bar. Thanks.

@lynnlightfoot: What a breathtaking spectacle! I find it curiously reassuring to know that the world retains its magic in the face of humanity’s penchant for self-destruction. It’s comforting to know we can’t ruin everything.

@SanFranLefty: Damn. At least he lived to see Phil Spector behind bars.

Anyone note the whitewash of his divorce in the WAPO a month or so ago. Difficult divorce, I think they called it.

One hand does wash the other, now doesn’t it?