I Only Have Thighs For You 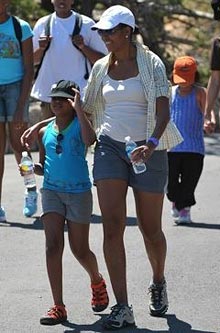 Looking for something — anything — to distract us, we stumbled across what looked like a fun controversy: criticism of Michelle Obama’s vacationwear.

During a recent family vacation to the Grand Canyon, Michelle Obama stepped off Air Force One in a pair of “short shorts” that some are calling inappropriate.

nojo
7:00 am • Thursday • August 20, 2009
comment »
Choose Your Delusion
Speaker of the Birthers Douchebag of the Day
30 Comments
JNOV

Those are not short shorts. Zzzzzz.

They’re walking shorts and if anyone had any complaints they should be stuffed into a chador and thrown off of a bridge.

Considering the spate of celebitard WHITE girls who don’t wear underwear, I don’t see what the complaining is all about… oh right, racism (and jealousy.)

I’d like to deliver this lesson to my TV brethren, who should have learned this already:

If you can’t actually find an instance of people saying said stupid thing, then maybe people aren’t fucking saying it.

Too many exec producers in this world who love non-existent controversies. This is the result of a story meeting where someone probably says, “those are kind of tiny for a First Lady, someone’s got to be saying something” and when no one can find any evidence of it, insists that it’s still an interesting and valid story — it’s a “talker.”

Controversy over Michelle’s shorts exists in somebody’s mind over at the Today Show, elsewise they wouldna said it.

My guess it’s that Gifford woman and her sidekick — what’s-her-name, Rhoda, Choda?

They seem exactly the pair that would start this kind of shit.

The only person they quote who wonders about the shorts was Robin Givhan, who freaked out when Hillary wore a top that wasn’t buttoned at the neck. And Givhan doesn’t say they’re too short, just that they are kind of casual for stepping off AF1. But wha the fuck is Givhan’s problem in general?

Of course, if MO had worn a pair of capri pants or a sundress, they’d be jumping all over her for being so formal and not dressing casually like a “regular ‘Merikan”

The vid from Bait and Tackle is hilarious. Levi should definitely do it. Except he hasn’t been to college. Oh wait, that’s the ‘theme’ of the site not literal truth. But who cares? Hooray!!!! This is America!!!! Thank you for that link, noje. I won’t ask how you found it. Though I expect it has something to do with your Lloyd Webber obsession – if you know what I mean. But it has made me happier while knowing that I have to go off presently to see a matinee of Ghosts. The only upside to which is that at least it isn’t Strindberg. Maybe if Oswald had done a little ‘modelling’ for straightcollegemen.com he wouldn’t have been such an insufferable little pill.

@ManchuCandidate: “celebitard white women…”
Your comment made me think…could these yammering morons also be all flustered about seeing MO in shorts b/c the only image of women that is force-fed down our throats is of anorexic looking size 00 white women, and here’s a woman who has (a) real muscles and curves, and (b) not white skin.

Personally, I think Michelle has a smoking hot bod, and she can wear (or not wear) whatever the hell she wants.

All three of the very fine first ladies from the State of Texas wouldn’t be caught dead in shorts like that. I doubt any of them have even ever been naked in front of our Presidents. And now if you will indulge me: I like to take every opportunity to remind people, no matter how off topic or offensive it may be, that our fabulous former first lady of the last administration has the distinction of killing a man while drunk. Without a gun.

@texrednface:
thanks for reminding us! i miss the clampetts sometimes!

@SanFranLefty:
totally agree..she’s smokin and can wear anything. however, she had to know, as did her handlers, that those shorts would raise eyebrows.
it makes me think they would throw her out of AF1 topless in a g-string to distract people from their illegal mooslim socialist preznit and his 3rd reich health care ideas.

@baked:
I dunno about the political calculus (at least I hope not.) Those are “mom” shorts to me and I don’t see the problem with the first lady wanting to walk around in shorts on a hot day.

@SanFranLefty:
The more I think about it, the comment strikes me more as a catty comment to be overheard at PTA meeting.

What, is this Jump the Shark Week?

This should be a laff riot.

@blogenfreude: Please oh please let Sarah Palin be the next guest host for Hasselbeck. I would pay good cash money to watch Whoopi go up against Palin.

@blogenfreude: sometimes real life just runs laps around satire. this may be one of those times.

@baked: Did you see the Jon Stewart clip on Barney Frank’s Town Hall snaps? It will make your day.

@SanFranLefty:
i had not seen this! you, jon and barney can always make my day!

@ManchuCandidate:
EVERYthing a politician does is calculated. this was a major photo op.
i don’t think MO wakes up on AF1, yawns, stretches, and says, hmmm…wonder what i should wear today? i wish i had your hope….

remember my very first sentence? “single shooter my ass”
if it smells, i’m on it.

Ibsen is best played at double-speed. Hedda Gabbler becomes -ah!- light and airy if you do that, which makes the final scenes really pack a wallop.

@Tommmcatt Floats: Ibsen is best played in the dark. Somewhere far, far away.

@Tommmcatt Floats: @Benedick: I’ve never understood the appeal of Ibsen. Even back when I was a theatre geek in high school and college, I was meh.

I was forced to read Hedda Gabbler. Its more of a psychology text than a play. I got it, repressing emotion and self in service of cold rigid conventionality makes for cold sad repressed people with major hidden issues. OK.

But I like Scandinavians when they sing. Abba, Bjork, Ida Maria, maybe its the only time they let go.

@SanFranLefty: @Promnight: I jest about Ibsen – kinda – seeing as how he’s one of the Fathers of the Modren Theatre and all. What’s hard for us is to see him in context. Strip away the colossal shock his plays presented to their first audiences and you are left with a great deal of nuts-n-bolts construction and large doses of WTF. In Ghosts much is made of the fact that the orphanage that provides the plot motor has no insurance – the playwright plays long defense on that one (I have no idea what that means but hope it means looping around the pack to catch some improbably thrown off-ball) by trying to turn it into a character point: the pastor claims that to take out insurance will look as if they don’t trust in the providence of God. Yeah, me neither. Then we hear about the caretaker’s fondness for teh booze – which of course instantly endears him to that part of the audience unfortunate enough to still be awake – and the large pile of wood-shavings in the corner: so of course even a five year old with ADD knows the orphanage is not going to make it till the final curtain and chances are good we’ll have off-stage flame effects by the end of Act 2. The only upside is that it isn’t O’Neill. When he gets DSC (down stage centre) to nail his plot to the floor he’ll start by dropping the hammer, then losing the nails, then hitting his thumb, then going to OP (off-prompt, meaning the side of the stage opposite the stage-manager’s desk – when stage-manager’s had desks on the stage before being relegated to sky-boxes) to sulk.

On the upside, in the production I saw, they somehow managed to get Oswald’s pants off, which I found enterprising. Though not perhaps quite so ambitious as Alan Howard (who had a penchant for that kind of thing) removing all his clothes while playing Hamlet.

Nailed it. It was once good, but it has been killed by imitation. Everything looks a bit like a cliche.

HEY! I’m in America! I watched Maddow for the first time! Ridge wrote a book! The Senate needs 80 votes apparently! The coffee sucks, but you get free refills! Air conditioning!

I AM A STRANGER IN A STRANGE LAND.

@RomeGirl: And lots of ice in your cold beverages! Enjoy! Make sure to go to Cafe Prom if you’re on the Shore.

@RomeGirl: And if and when you walk into a convenience store for a sody pop, know exactly what size, flavor, ice/no ice, travel/no travel, diet/regular, etc. etc. Ma Nabisco always got frustrated and then would say “just give me some water, please”.

@SanFranLefty: I thought he was in California? I’M CONFUSED.

@The Nabisco Quiver: The choices for EVERY SINGLE PRODUCT are overwhelming.

@RomeGirl:
it’s so weird isn’t it? i know! i know!
america rocks the air conditioning and ice, the rest of the world is much more concerned about conservation…silly people. the ice caps are gonna melt anyway, so bring me ICE!!!
20 days til air conditioning if i haven’t liquified by then.