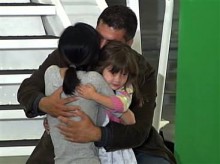 It was wrong to do it. This trip gives North Korea the ability to act like the good guy in world public opinion by releasing people they shouldn’t have seized in the first place. Considering their record, bomb explosions, and missile tests, we should not be in the business of letting North Korea score propaganda victories.

One: the two people released were journalists.  Don’t you think that they would have some decent reporting to do about the justice system of North Korea, and areas of improvement with regard to, um, justice?

Two: Bubba got a free-roll on intel regarding the health (physical, mental, otherwise) of Kim Jong-il.  That might be somewhat useful to Barry et al.

Three: See that picture up there?  That’s the photo going to 99.9% of the world right now.  Pictures speak louder than words.  In particular, yours.

So: a propaganda victory?  Dude.

You think Morris gives a fuck? He’d lick these womens’ feet and have them gutted and barbequed as far as he is concerned. Twisted goatfucking GOP twits like Morris only believe there is one option for any diplomatic scenario: bomb into rubble.

Not everything has to be political.

I’ll kid about Bill doing it for two women, but he got them out.

Dick Morris would be enormously improved by obliteration.

Dick Morris has been rightfully marginalized. What a tool.

John Bolton was singing the same tune. Fuck ’em. The picture of four year old Hannah hugging her sobbing mother says it all.

Utterly predictable. The one thing you can say about conservative commentators is this: every utterance they make, every judgment they proclaim, is crafted with an eye to defending a GOP position, on the one hand or attacking or diminishing the accomplishments of Democrats on the other. Their personal biases or opinions never enter into the conversation. A conservative commentator will never applaud the actions of a Democrat in public, regardless of how much he may agree with him in private, except as an underhanded compliment meant to belittle him. They are like robots.

@Serolf Divad: That’s an insult to robots. They are assholes.

@SanFranLefty: That’s an insult to assholes!

SanFranLefty / RomeGirl: Yes. Assholes are useful. They permit the orderly transportation of shit out of your body. Show some respect!

Anyone want to predict how long before some asshole douche Christo-fascist says none of this would have happened if these two women had been at home being housewives and not working?

And, my local fishwrap has a photo slideshow of the reunion with loved ones that would melt most hearts.

@SanFranLefty: thanks for posting these.

@SanFranLefty: Oh wow. That was great. Even Bill and Al hugged.

So their flight came into Burbank. There are jokes to be had here. Let’s see:

/Not my best work.

@SanFranLefty: am I the only one who noticed the Chron’s caption called Big Dog an (R)?

@Signal to Noise: In this context, it stands for Rweltkney.

Iran did the same thing recently; in that case they took someone who was living there, in this case perhaps the N. Koreans got lucky.

Would it have made any difference if the young women were caucasian? Or was it enough for Morris et al that they worked for Gore and were rescued by Clinton on behalf of Obama?

@nojo: No. Just the fact that anything Democratic was getting good press meant the RNC noise machine had to be cranked to 11 to condemn the event as a Threat to National Security.