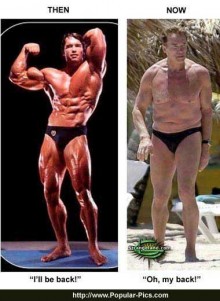 Atrios reminds us that, in the not so distant past, the Villagers thought Ahhhnold was the best politican EVAR. Maybe they should check in with the citizens of California to see how things are working out:

A new PPIC Poll in California shows Gov. Arnold Schwarzenegger’s (R) job approval rating dropped to a new low of 28%.The last time a California governor’s approval rating was that low was in 2003 when then-Gov. Gray Davis faced a recall election and was in a budget standoff with the Legislature.

Oh my. That does not sound good. But remember the good ol’ days, when guys like Richard Cohen were coming in their pants for Arnold?

‘When the spotlight hit Schwarzenegger, he performed magnificently,’ gushed Richard Cohen in the Washington Post last week. The veteran columnist actually said that after watching a Biography-channel piece on the movie-star-turned-governor on election night, he ‘can’t help liking the guy,’ even though he disagrees with ‘some of his policies.’

Schwarzenegger’s treatment of women, as described by those who came forward to the L.A. Times, is now described by Cohen, who fancies himself a liberal, as merely ‘boorish’ behavior. That’s not a far cry from what most conservatives said, having endlessly railed against Bill Clinton’s supposed depravity for engaging in consensual oral sex, while now excusing Arnie’s workplace sexual harassment and abuse, dismissing it with a ‘boys will be boys’ grin.

Yeah, what’s a slap on the ass when you’ve got a big state to run?!

Liberal pundits like Richard Cohen, meanwhile, are even saying that Arnie’s win should teach Democrats to ‘learn the virtue of his moderation,’ and to start to compromise on issues like abortion, observing that ‘late term abortion’ is ‘unsettling.’

Man, those were the days. Of course, back then nobody could have predicted that a mediocre action/adventure actor would trash the place.  Nobody.

Like Dicky Cohen knew anything back then (dementia is a long time coming.)

If Dicky’s a librul then I’m built like Arnie.

“And that gives us debt-soaked citizens a chance to rise up and gasp and spit and shout: ‘MR. PRESIDENT, AND YOU, TOO, CONGRESS! YOU WORK FOR US! NOT THE OTHER WAY AROUND! WE VOTED YOU IN! AND WE CAN TAKE YOU OUT! STOP THIS WATERBOARDING!!'”

Wow. That’s some league-leading stupid there.

@blogenfreude:
Like Pat Boone would vote for a black man.

You had to put the bodybuilder pic up just as we learn that Big Papi juiced.

@chicago bureau:
Who knew that steroids would cause such a jump?

Of course, I’m not trying to be the Jays equivalent of Hawk Harrelson considering TO is where Rocket Roger Clemens got his first taste of angry man muscle go-go juice.

@blogenfreude: I was going to make a Polyester joke, but I keep forgetting that was Tab Hunter.

Granted I dunno nuthin’ ’bout Sport, but what’s the big deal with steroids? Why do we have Congressional hearings where scrawny, incontinent old fucks lambast these bulging hulks?

The players are just doing the job they were hired to do, right? Better living through chemistry, etc.

@Original Andrew:
It’s all about playground fairness and setting the example of good sportsmanship… seriously. The whole 10 yards of “won’t please someone think of the children?” also the records/stats which are the hollowed traditions of the sport.

Truth is, beseboll is a US America government sanctioned monopoly unlike footboll which is a Las Vegas one and ‘okey which is a retarded run one so the Congress has the “right” to call them on the carpet and shame them.

If based on the whole “pureness” thing then the still reigning world champions is still the 1993 Toronto Blue Jays (at I think so.)

All I can is that this happened under the watchful eyes of one Bud Selig, all round asshole and duplicitous son of a bitch, and I couldn’t be happier.

@ManchuCandidate: I went to college with Bud’s daughter. Total C-U-Next-Tuesday.

@ManchuCandidate: ’79 Pirates. After that it was cocaine, gambling then finally ‘roids.

@Mistress Cynica: And I ran into Brooks Robinson on campus my sophmore year of college! I tried to encourage him to send his son there, but I may have slurred my words too much…