Stinque
Home Latest Comments Log in
If it smells, we’re on it.
Stinque
Miscellaneous Top Secret Documents.
Parties We Missed 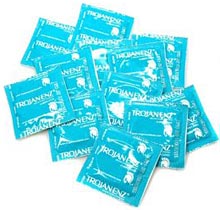 Okay, let’s clear this up:

The nation’s wild horses would be protected from slaughter and given millions more acres to roam under legislation moving toward passage today [Friday] in the House of Representatives.

Supporters of the bill mobilized after the Interior Department announced last year that it may have to kill thousands of healthy wild horses and burros to cull the herds and prevent overgrazing.

It’s called the “Restore Our American Mustangs act” (insert Ford joke here), and the CBO estimates the price at $200 million over five years, plus another $500 million to buy 20 million acres of land after 2013. The AP story estimates 36,000 wild horses and burros are affected.

So: Whether to spend that kind of money on that purpose is an honest question. But where do the pony rubbers come in?

Near as we can tell — and we’re not spending much time on this — Powerline’s John Hinderaker gets the credit, via Mark Steyn at NRO:

In order to prevent the mustang population doubling again by 2013 and requiring the annexation of another 50 million acres (ie, an area the size of Ireland, Denmark, Belgium, and the Netherlands combined), the bill mandates “enhanced” contraception for horses and burros.

John Hinderaker of the Powerline website mused on whether this would involve Nancy Pelosi (who’s very keen on federally funded contraception) personally installing the enhanced prophylactic device on every stallion. The pay-per-view rights on that would surely be worth $700 million at least.

We suspect there’s more than a bit of silly “volcano monitoring” to all this, but we have to go slop the pigs.

I’m betting a lot of NRO’s commentators volunteer to put condoms on horses.

Okay, my brain is alternating between “If I Had a Horse” and the nursery rhyme:

If wishes were horses
Beggars would ride:
If turnips were watches
I would wear one by my side.

ADD: There’s a Brokeback Mountain joke in here somewhere, my brain isn’t working. Due to the Lyle Lovett earworm.

Y’know, given how they’re blowing up one aspect of the program into the whole $700 million, Colbert’s running gag about “health care for the entire universe” doesn’t seem much of a stretch.

Yup , (as per Pickles, who may have been on a Xanax+Vodka binge).

“I’m proud of George. He’s learned a lot about ranching since that first year, when he tried to milk the horse. What’s worse, it was a male horse,” she said.

TJ/ EGR not Governor X. I take it on good authority that he is “too cheap”, and that staff extracted other personal details in order to clear this potential roadbump out of the way.

All I know about Mustangs I learned from that sad Marilyn Monroe movie co-starring Rhett Butler, his last before he died, and one of her last. She was wonderful.

I should add, they were harvesting mustangs for dogmeat.

@moeman: I am glad you mention pickles and “xanax” in the same sentence. I am not saying this out of my vast, enormous, partisan bias against all things Bush. I mean this in utmost sincerity, just observing, as well as possible from the media, a woman who always struck me as odd.

I have spent a lot of time in my life amongst people on drugs, and some of that time, I was not on drugs myself. It is not knee-jerk bush bashing when I say this, its what I would say about anyone, that woman always, always, looked medicated to the gills. Always.

She had the look of a scientologist, someone drawn into the cult, and the cult made sure, through whatever means necessary, that she stayed on the reservation, and heavy medication, from all appearances, did the trick.

Like I say, this has nothing to do with political bias, I looked at Nancy Reagan, and knew she was the smart one and ruled that roost. I look at Barbara Bush, the elder, and knew that she was no rocket scientist, but she was an evil old grande dame bitch on wheels, and it was the vitriol delivered through her teats that made her children evil.

But poor Laura, she always looked to me like a woman lured into marriage to a wastrel sociopath by the wealth and status of his family, and because he had to have a beard, she was medicated sufficiently to fulfill the role of a wife for the moronic psychopath, solely to prove to the world he was a normal enough human being that someone would put ip with being his wife.

I must say, Pelosi delivering horse contraceptive on pay-per-view would net a ton of cash. $700 mil seems a bit optimistic, rule 34 suggests that horse “enthusiasts” could see that kind of thing anytime.

@Promnight: “I am glad you mention pickles and “xanax” in the same sentence. ” thank you so much for this, I only just now made it up from the floor I was laughing too hard

@Nabisco: Rendell’s too chintzy to be Gov. X. I guess that’s a good thing. I’m not surprised, but it doesn’t take away that he’s a total ho-bag.

So who is it? Massachusetts? Minnesota? Ho-Ho from Vermont? They said it’s not California, and I’m not up on my first ladies of states trivia enough to know who it could be. And in my world, the First Lady of Pennsylvania is big fricken’ shit.

Obama is giving the pill to horses to prevent them procreating.

From what I understand about population control of horses from here in Australia (We call them Brumbies) it’s best done with with a gun from from a helicopter (Too hard to develop a contraceptive bait station for horses).

Coincidence? I think not. If I was the unmarried father of a Downs Syndrome child in Alaska, I’d be watching out for black helicopters.

Heh. The pieces are falling into place.

How come we can have birth control for wild horses but no contraceptive coverage in health care reform?

Fucking “Blue Dog” Democrats sucking at the teat of Big Pharma and the Christo-fascists.