The Lord is My Pimp 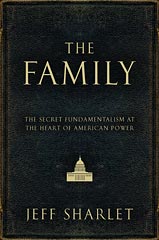 Title: “The Family: The Secret Fundamentalism at the Heart of American Power”

Blurb: “Sharlet is present when a leader tells a dozen men living there, ‘You guys are here to learn how to rule the world.'” (Publishers Weekly)

Review: “This book is very poorly written about a group of people who are insignificant.”

Customers Also Bought: “Idiot America: How Stupidity Became a Virtue in the Land of the Free,” by Charles P. Pierce

Footnote: We take a break from our usual sniggering to celebrate the author who’s been enjoying some serious facetime with Rachel of late. C Street is the tip of the iceberg; here’s the rest, building upon Sharlet’s March 2003 article in Harper’s.

nojo
7:00 am • Sunday • July 19, 2009
comment »
Choose Your Delusion
I Did Not Know That Honest Inquiry
16 Comments
FlyingChainSaw

Where is the biblical reference commanding disciples to go pestorkabout?

FlyingChainSaw: I knoweth not. But do remember that the people at the C Street Compound Of Love And Surveillance were all Members of Congress. They write laws for a living, and thus came to the conclusion (not-irrational, given the location) that laws could be changed at will. That the law in question was written by The Big Fella is a mere detail.

(In other news, it’s official: pestork is a word. Urban Dictionary definition is up.)

I suggest a new Vox Stinque, beginning: “The Best Thing About Living At The C Street House Is . . .”

As before stated, with no evidence whatsoever to back me up, these people do not win. Read the list of names and you’ll find some of the most ignorant and backward-looking members of our great deliberative body. Yes they drag us down, yes they hold things, back but allow me to suggest a little improvisation: imagine any of these goons in an international situation with grown-ups. Imagine them in France.

Also, as before stated to the point of embarrassment, I do believe that the fundamental political language of this country is that of a virulently reactionary Protestant schism that sees itself as the one true way. Since Plymouth, men and women of intelligence have been trying to figure out how to deal with the loonies. So it may be three steps forwards, two steps back but steps are made. The press has never been any better; before there was Fox there was Hearst. Of course they must be held up to ridicule, and it should be loud and long. But no one can make them seem as ridiculous as they do themselves. Now Sanford is declaring that God will heal him.

We’re about to have a hispanic woman on the supreme court: would have been unthinkable 10 years ago. We might even get health care. Woo hoo!

Seriously: I think the docs and the hospital firms and Big Pharma are going to gum up the works so much that the final product will do more harm than good. Which would be fine in the end, because the bill won’t pass.

@FlyingChainSaw: Sharlet says these men believe that morality is a secular construct, and doesn’t apply to them because their god has chosen them to lead.

@blogenfreude:
Yeah, that always works. Look at what happened to Louis XVI

@chicago bureau:
I kinda agree with Benedick. The one flaw of all fundies is their raging incompetence. As a couple of psychological studies showed, “No doubt/no questioning/no learning = no competence.”

As for the HC bill, I hope you guys do get some semblance of public healthcare. I disagree with hopey that government shouldn’t be involved, but I think this is the “wedge” and/or slippery slope.

If guys like Ben Nelson and other “centrists” think that there is no need for it or finds the thought of Government run healthcare so hateful then perhaps those senators (and the GOP) should give up their government SUPPLIED healthcare.

@chicago bureau: I think the bill will pass. If it doesn’t it will finish the Democrats. And I think they know that.

Long-term health care costs are the single (by far) greatest cause of bankruptcy. It is the way that any money acumulated by middle- and working-class Americans is transferred to the wealthy.

@ManchuCandidate: I think that’s right. Finally, they arrive in a klown kar and spend all their time trying on red noses to see which will make them look the most foolish. Their sanctimony is only matched by their incompetence.

And if a health bill is not passed there will be an outcry about the public policy supplied to our elected officials and their staffs.

But there’s money to be made, see, and people want more money than they would otherwise get. So it gets complicated.

The way it works now is bizarre. Take, for instance, me.

About a month ago, while I was getting out of the shower (a scary enough experience, yes), I suddenly had an immediate, sharp pain in my back, about halfway up, on the left hand side. I couldn’t stand up straight, and my breathing became really labored. And I thought — oh, no. Not that.

(Please refrain from the WBBM Superfans references. I heard them enough at work.)

So: being a good U.S. American, I remembered that when you think you are having a Big One, you need to get yourself to a hospital as soon as possible. But also, as a good U.S. American, I seriously doubted that the Big One was happening. I toughed it out on the bus for about ten or fifteen minutes, partially in denial and self-doubt, but hopped off at the hospital on the route, just in case.

My worst fears were confirmed about an hour later: it was a complete false alarm. A muscle in my back was acting up for no good reason. That’s it. They gave me a prescription for Aleve and sent me on my way — after an EKG, chest x-ray, and blood work. The EKG, in the words of the doc, was “perfect.” Chest x-ray was fine — which was actually encouraging, given my love for the smokes.

The bill came last week. The total amount of work done was upwards of $3,000. The insurance brought that down to about $600 ($500 deductible, co-pays and other nonsense).

Two things: (1) If somebody had the same scare I did, but did not have insurance, that would be anywhere from one month’s salary to three months’ salary, or worse. (This goes to Benedick’s point.) All the talk about socialized health care kind of looks silly as a result. If the guy doesn’t pay, he either goes into collections, or the hospital writes it off. Both are bad outcomes (unless Medicaid or Medicare comes to the rescue). (2) I am a serial worrier, but I am by no means a hypochondriac. I walk off more aches and pains than I probably should, and I work more often with a cold than I probably should. But this experience has kind of put me off going to the ER unless I am flat on the floor. Which is kind of the wrong lesson to learn.

@chicago bureau: You can’t just walk it off when it’s your kids who get sick.

Dodgerblue: Yeah. There’s that too.

Oh, christ. They’re here: Jon and Kate’s Spawn Of 8 have landed in New York City for some kind of TLC marketing event. While Jon sets up his gangsta-ass bachelor pad of Ed Hardy shirts and Malboro Reds and probably a Foosball table or something, Kate – who I genuinely feel bad for, now, if only because we’re all learning exactly what kind of douchebag was hiding in that repressed manchild of a human being she was married to – was taking questions from her kids in the vein of “are we there yet” and “when will we officially be able to call our existence tortured?.” Meanwhile, what the hell is TLC doing dragging them to New York for a marketing thing? Also, the midgets from TLC’s midget show (not it’s actual name) were there and so were some other people. Anyway, if you happen to see them above ground or below ground, I don’t know, keep the kids away from the tunnels and don’t let them go to Mansion with Dad. In fact, they should all probably be rounded up and kept in a glass case at Mars 2012 so we can show tourists what we think of them despite stimulating our economy: yes, we look at you, especially when your kids are screaming about getting a bottle of Vitamin Water, because we want to beat you with one. Truth. Oh, and apparently, the paparazzi and security guards surrounding this nonsense got into a fight and Jon was nowhere to be seen because he was probably trying to (unsuccessfully) get into Minetta Tavern. Sorry, man, but it ain’t happening. [People and People]

@blogenfreude:
Who knew the Simpsons could be so prophetic? Except that Apu and Manjulah have souls unlike Jon and Kate.

BTW is the producer of the show, Larry KidKill?

Has anyone read Persepolis yet for our next Stinque book club reading? Go get it if you haven’t. I enjoyed it but had a lot of questions too. And this is only the second “graphic novel”/comic book I’ve read.

@SanFranLefty: I saw the filmed version.

@Benedick: And if a health bill is not passed there will be an outcry about the public policy supplied to our elected officials and their staffs.

When was the last time you seriously saw a public outcry? I mean, really. Even the war protests are written off as nutbag hippies disrespecting America. If we can’t get off our collective asses to say something about the kind of atrocities which we’re already involved in, who’s going to peep about a vague-seeming change to a system that everyone has already accepted as broken?

I’ll grant you, electing a bunch of spineless Dems into office could be seen as a form of public outcry, but there’s no one more-left than the Dems to lever into office when they collapse into ineffectual heaps of refuse (as they pretty much already have).

I sometimes wonder if this country wouldn’t do a lot better split up into a number of smaller countries based on geography and red v. blue ideology. It’s probably a stupid idea (there’s a selection of excellent reasons I’m not involved in politics in any practical way).