Stinque
Home Latest Comments Log in
If it smells, we’re on it.
Stinque
Assholes, they do vex us.
Howard Beale Presents 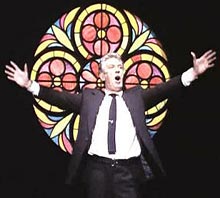 With the talk of Uncle Walter continuing apace, amid the loony rantings of Freepers and the decent and honorable memorials elsewhere, there has been — perhaps — a well-judged critique, in this Guardian obituary:

Astonishingly, no one thought to question the phrase that became his professional trade mark, intoned at the end of each nightly bulletin: “And that’s the way it is.”  That, in fact, was simply the way it appeared to Cronkite. As one of the founding fathers of America’s network television news and as managing editor of the CBS evening news for 19 years, his evaluation of world events helped shape his country’s electronic reporting into the extraordinarily insular and inadequate chronicle it has become. That, in turn, opened the door to Rupert Murdoch’s current brand of unashamedly partisan news coverage.

During Cronkite’s reign, the standard television bulletin, from which most Americans drew their picture of the world, lasted for 22 minutes. The consequent pressure to condense or omit means that events in vast tracts of the globe remained unknown across the world’s most powerful nation. For all Cronkite’s insistence that he was a reporter rather than a front man, there was little evidence that he tried to inculcate a mission to inform at CBS. The prevailing philosophy was, and remains, to offer all the news that fits. With no national press to fill the gap, it has meant that for generations of Americans the broad sweep of foreign policy has wavered on tides of popular ignorance.

Surely, the history of TV news in America, and its faults, do not solely lie at the feet of Cronkite.  Commercialism in media — sex and sensationalism sells — takes that honor.  And he did some unquestioned good in his time — notably with his frank assessment on Vietnam.  But the question comes: is he blameless?

A little Graphic Intervention on my part — Network was released in 1976, after all. And Roone Arledge was given ABC News in 1977, which Doonesbury quickly dubbed “Wide World of News.”

Which is to say: The Guardian gets its premise wrong. People can and did question whether the network news of the day was sufficient to the task.

It’s unrealistic to expect that a network funded by commercial advertising would turn over a national news show to Lenny Bruce or Hunter S. Thompson.

nojo: Snaps on the edit and the moreing. Thanks. (Whenever you do that, you should slap in a Graphic Blandishment credit to your bad self.)

And to the broader point — yes. The scribe did forget that Network basically called its shot on Fox News, twenty years early.

In a bit of self-editing, I was going to ask in the post if we have seen the enemy and it is us. A shame, because that may be the definitive answer.

I can’t date this to the year, but talk of an hour-long network newscast was in the air near the end of Cronkite’s reign. The resistance was financial, but not in the way you might think.

Prime-time programming used to start at 7:30/6:30. In the early ’70s, the FCC mandated that the networks give back a half-hour of that for “local programming,” which affiliates quickly filled with lucrative fluff. Affiliates were also beginning to discover that local newscasts could be cash cows, not just license-fulfilling public services. By the time a network newshour could be seriously considered, it was too late.

The consequent pressure to condense or omit

Welcome to the Inverted Pyramid, dude. If you write a 20-inch story for an 8-inch hole, kiss that foot goodbye.

@nojo: paraphrasing: I would have written you a shorter news story, but I did not have the time.

That, in turn, opened the door to Rupert Murdoch’s current brand of unashamedly partisan news coverage.

Cronkite retired in 1981. Fox News Channel debuted in 1996. That’s a mighty leap of cause and effect.

The prevailing philosophy was, and remains, to offer all the news that fits. With no national press to fill the gap

Besides the venerable AP and UPI, major newspapers like the NYT and WaPo/LAT syndicated stories to local rags. And CNN launched in 1980.

Your Host also scored his journalism degree in 1981. Were we bitching about how lame our betters were? Damn straight we were. Halberstam’s The Powers That Be, about the effect of media concentration on the news, was published in 1979. Thirty years on, I still use it as a touchstone.

@blogenfreude: Shorter Guardian: Fuck him for kicking Friday night. Now I have to pull something out me arse stat.

nojo: Well, no. This obit was probably in the can for about five or six years.

I’m really surprised by how wrong the Guardian got it. Wow. Was this written by a 20-year-old?

Whatever Cronkite’s legacy turns out to be, I truly believe his motives were, if not pure, employed to get us accurate, timely information. If I’ve bought into the myth, it won’t be the first time.

@blogenfreude: It’s no myth. I was an NBC kid, but the network newscasts of the ’70s were straightforward, here’s the best we can do with 22 minutes events. The “magazine” shows — First Tuesday as well as 60 Minutes — also took themselves seriously, despite Jack and Ignorant Slut Shana. (Even Andy Rooney was truly amusing at first.)

They were also ripe for mocking, of course. But they had yet to become self-mocking.

The real shift — as Paddy noted — was generational, all those old-school journalists being supplanted by TV kiddies. I did some radio stringing in college, and while it was great fun, I made a point of looking for a newspaper job upon graduation. Whatever I did in the future, I wanted to be well-grounded as a journalist: five or six sentences on a city council meeting makes you lazy.

RomeGirl: Well, it had me going for a while, as the post attests.

It sounds plausible enough. There is a frustration with the American news media, and blame could go to the top. But upon further review: my credulity of the obit was somewhat misplaced. So — oops, y’all.

@chicago bureau: No, no, good find. My critique of British journalism on the basis of Fleet Street will be forthcoming.

@nojo:
Of the fact that they are worse spies than the KGB with cellphone eavesdropping and password stealing.

@chicago bureau: Plus, I think this will be handy when some back-channel chatter gets posted today or tomorrow. The problem isn’t Fox News — it’s mainstream journalists forgetting Izzy Stone’s warning not to fraternize with the enemy.

@nojo: Fraternizing is one thing, teabagging is another. Showing up at a Georgetown cocktail party and showing Cheney two documents that prove conclusively he got kickbacks from KBR and announcing to the assembled guests that you are going on TV the next morning to grab Cheney by the ears and facefuck him to death would please God and, no doubt, Walter.

nojo: Maybe, too, I was surprised at somebody going after the recently departed so forthrightly and earnestly. One could tend to get used to hagiographies after one witnessed the Michael Jackson funeral week.