Stinque
Home Latest Comments Log in
If it smells, we’re on it.
Stinque
Cassandra was right.
Weekend Sedition 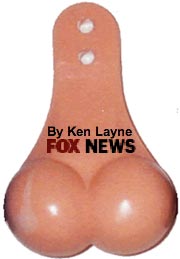 Because we take pride in ignoring things until absolutely unavoidable, we had no idea that Wonkette desecrator Ken Layne existed before showing up at Sploid, Gawker Media’s brief foray into Drudge-abatement. And hey, we liked him there. Heck, we even liked him at Brand W, before he fired Megan, and then we hated him. But that was before Megan hated us. Long story.

And we would have remained ignorant of Ken’s Dark Past had we not stumbled across a reference to predictions for 2003 from the likes of Little Green Footballs, Instapundit, and assorted other wingnuts.

Or, to use the jargon of the day: warbloggers.

It’s that casualty prediction that brought the list to recent attention — of the ten warbloggers responding, all but one called it at 300 or less. And alas, there’s no question asking whether anyone thinks the war will last six years or more.

But just seeing Ken’s name on the list is jolting. We figured him for an iconoclast, but we didn’t expect to discover his columns at the Fox News website:

The war isn’t over, of course. But allegedly corrupt French figure skating judges have replaced military tribunals as the judicial scandal of choice. The prisoners at Guantanamo Bay get three squares a day, top medical care, a Muslim chaplain from the U.S. Navy and cigarettes and hugs from the Red Cross. Will their final judgment be issued by the International Skating Union?

That would be February 19, 2002. Six weeks earlier, John Yoo signed off on denying Gitmo prisoners habeas and POW rights. A third Pentagon request, directed elsewhere, would explore the means to torture them.

Not that Ken could have known back then. But we would have hoped he was less gullible.

Buys a burqa for his sister off eBay. Tries to kill her when she won’t wear it.

Who is Ken Layne? One of those SNL people?

The only name on the list I actually recognized. Just sad.

The RWN guy was pretty touchy in the update when Hilzroy brought this whole thing up by using the “Right and Left got a lot wrong about the war” meme.

Note to RWN dude: The whole point was that this fucking war COULD HAVE BEEN AVOIDED. Doesn’t mean shit if the details were off by both sides. Why aren’t you in Iraq looking for all those missing WMD that was scaring the shit out of ordinary US Americans?

@ManchuCandidate: I’m reading The Dark Side now, which coupled with my cheery spring reading of Angler convinces me that the war was in fact not avoidable. Darth Cheney and Addington, backed by Yoo and other thugs, were working on the unitary executive from day 1, and war was just a way to help it along.

Question that lingers is whether Hopey is doing enough to roll things back to a constitutional government.

@Nabisco:
You’re probably right. Doesn’t change the fact it was unnecessary for the US America and the rest of the world, not Cheney’s gang of shitballs.

At the time I certainly thought it should have been avoidable. I just think about the waste of lives and resources and sigh.

I like the idea of prosecuting Yoo as an enabler. Except that I read that he’s now hired counsel at taxpayers’ expense, which is puzzling — were war crimes within the course and scope of his job?

@Nabisco: There’s also this epic takedown — “mutant offspring of Virginia Postrel, Andrew Sullivan, and Ariel Sharon” — if you’d like to see somebody pick apart Ken line by line. But the piece itself is so sadly dated, making fun of the very idea of “weblogs”, that I left it on the table.

@ManchuCandidate: At the time I certainly thought it should have been avoidable.

At the time, anyone with a functioning frontal lobe should have seen that it was a deliberately insane endeavor, as well as completely illegal under international law. Though as we’ve seen, law, like history, is rewritten by the…victors?

One thing I’m learning, more every day: Never misunderestimate the cognitive dissonance of a rabidly Jeebus-infatuated and patriotic populace.

@Nabisco: Question that lingers is whether Hopey is doing enough to roll things back to a constitutional government.

I think that question has pretty much been answered. Hopey™ talks a good talk about transparency, rule of law, etc. When it comes time to walk, not so much.

A case can be made that the war against the Taliban was “avoidable” — that the response to 9/11 could have been a criminal investigation instead of military action. The word at least makes sense in that context.

But Iraq? Completely ginned up, as was evident at the time. (More Ken fun: He gives props to Judith Miller in another Fox column, this one beating the drums against Saddam, and noting “Mohammed Atta’s meeting with Iraqi spies in Prague”. What color is your Kool-Aid?) The Iraq war wasn’t merely “avoidable” — it had to be railroaded.