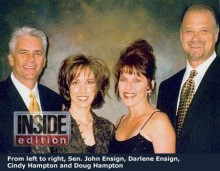 The Las Vegas Sun had a report Sunday that fleshed out the story of John Ensign’s philandering:

When Sen. John Ensign hired Doug Hampton to be his senior aide in November 2006, Nevada Republicans were baffled.

Hampton was an unknown, without a policy profile or political experience.

According to eight Nevada and Washington Republicans, Hampton’s chief qualification: He and Ensign were best friends, as were their wives.

“It was a hire based on a relationship,” said a prominent Republican who was granted anonymity to speak freely.

“Best pals,” said another Republican. “It was ridiculous.”

Yesterday, TPM linked to the piece and asked if perhaps Ensign hired fellow Promisekeeper Hampton to help him keep his little soldier in his pants:

We reported last month on the Promise Keepers connection, and noted that one of the seven promises to which participants commit themselves is “pursuing vital relationships with a few other men, understanding that he needs brothers to help him keep his promises.”

A source told us for that post that when Hampton was hired, the attitude among other staffers was, “This is the boss’s religious buddy. We’re not gonna bitch about him, but we don’t really like him.”

In other words, could it be that Ensign — who had had a long unexplained absencefrom his job in 2002, which many observers believe was triggered by another affair — brought his religious friend onto the staff in part to help keep himself on the path of righteousness, but then ended up straying from that path, with disastrous consequences, with his friend’s wife?

The word irony would hardly do it justice…

Now the commenters are taking Zach to task for this bit of speculation.  I think it’s reasonable to speculate, but then again I’m a jerk. What say you?

This is pretty twisted: one of the seven promises to which participants commit themselves is “pursuing vital relationships with a few other men, understanding that he needs brothers to help him keep his promises.”

In other words, the PKs are so childish, they can’t conduct themselves as adults and could end up acting out like cackling psychopaths the second another PK isn’t breathing down their necks and barking scriptures into their ears. “Bwahahahaha! Dave’s not here! I wonder if his wife will blow me if I show up at the house naked! Bwahahahaha! “

Doesn’t this mean Bill O’Reilly has to move to Zimbabwe or something?

@FlyingChainSaw: I’m pretty sure that’s how it went down.

So I went over to Jalopnik for a few minutes to get away from the MJ coverage (most here are streaming it), and what do I find? Shameless.

@blogenfreude: On the other hand, I hear Deadspin has a good chart of Talibunny’s game play.

Jamie Sommers wants Brooke Shields to speak at her funeral

Is it just me or does Ensign’s mistress look a lot like his wife? All you really need to do is let down her hair and remove the dark lipstick.

@Jamie Sommers wants Brooke Shields to speak at her funeral: As you probably know, we’d all like to do twins.

@SanFranLefty: He and Bobby Knight make a fine pair

@Jamie Sommers: Isn’t Knight, Jr. the coach now? The Tech football team had a hell of a season last year, except for the Oklahoma game . . . that last second TD catch against Texas? Awesome. Fizzled in the Cotton Bowl v. Mississippi, however.

@redmanlaw: Please don’t open that wound for me, it’s just starting to heal . UT should have been in the Cotton Bowl instead of that fluke team from dry Lubbock.

@SanFranLefty: Totally OT: When did you change over to Mayor McDreamy’s hair?

@rptrcub: Yesterday. I needed a change.

Yeah, what is that about? Triplets even.

Honey, I hate to tell you but it’s a gay male fantasy too. I don’t get it either, but I sure as hell have it.