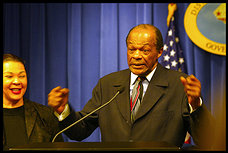 D.C. Council member Marion Barry was arrested last night and charged with stalking a woman after the woman reported that Barry was “bothering her” as the two traveled in separate vehicles in Anacostia Park, police said this morning.

Is the correct response…

(A) If only the Nats had that kind of determination.

(B) No drugs involved?  That arrest shouldn’t count, then.

(C) He was in a rush to a rally supporting traditional marriage.  That’s all.

I was in law school in DC when he was restored to the mayoralty after his bust. Very annoying ….

How is this man still holding elected office? What is the matter with DC voters, fer chrissakes?

Hey, look who is Governator of California.

@Dodgerblue: I’m sorry, but I think that the Empire State has them all beat.

What is the matter with DC voters, fer chrissakes?

When my late Grandmother was still living in a single family home in the mid 80’s, she had to drag her trash cans down an alley about 60 feet to the curb. Grandma called the Mayor’s office, explained the problem, and was told it would be taken care of. From that time on, the garbagemen on her route would go into the alley to get the trash cans and return them when empty. You couldn’t tell my Grandmother shit about Marion Barry after that. There is a whole generation of Washingtonians who say that Marion Barry gave them their first job and will never turn their back on him no matter what he does.